What influences whether we buy private hospital insurance? 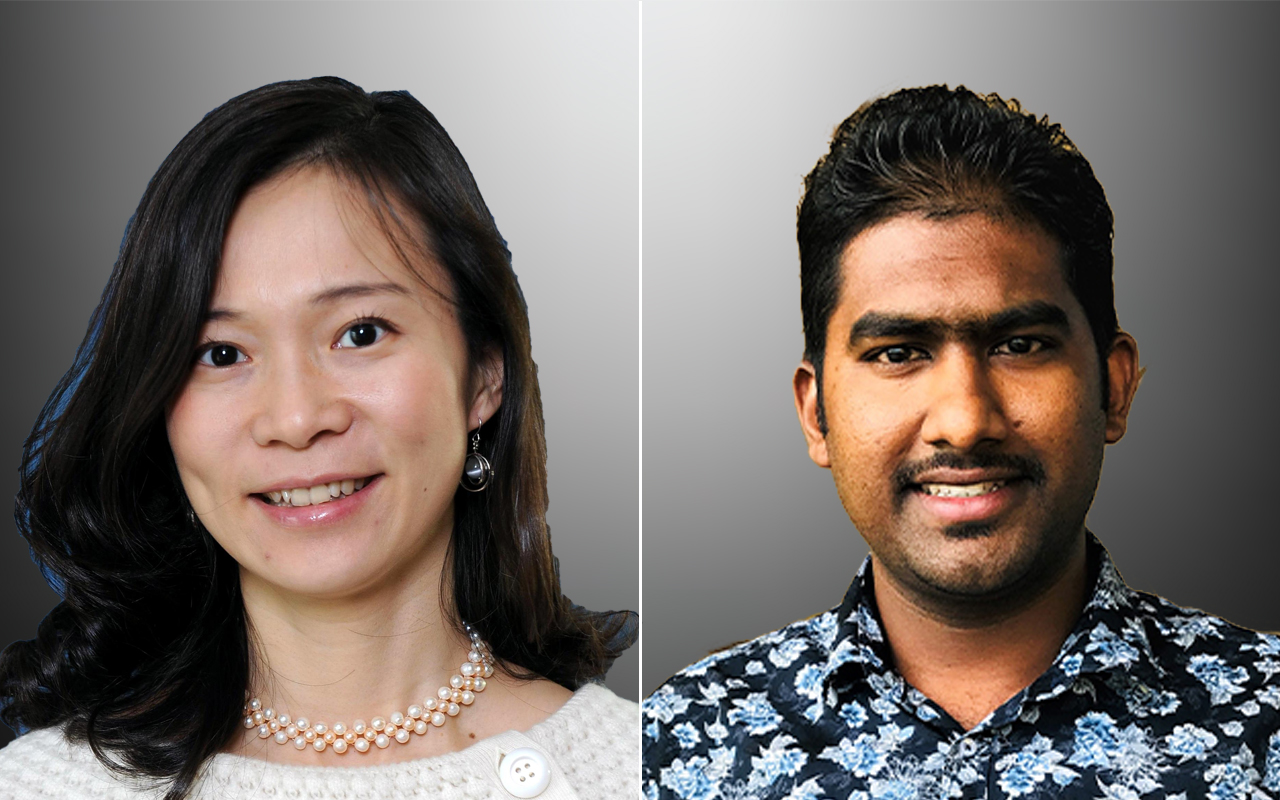 ALL Australians have access to Medicare that covers hospital treatment as well as subsidised medications and other medical treatment. In addition, the Australian Government regulates private hospital insurance (PHI) with the aim to attract private financing into health care and reduce the burden on the public hospital system.

Since 1997, the government has implemented several policies to encourage people to purchase PHI, including rebates to partially refund premiums, the Medicare levy surcharge that charges additional tax for people who earn above a certain threshold and do not hold private hospital cover, and the Lifetime Health Cover loading for young people who do not hold private hospital insurance after they turn 31. Historically, these policies have been effective to increase the uptake of PHI, but they have recently become controversial because they were implemented with high costs to taxpayers and it is unclear whether they have reduced the burden on the public hospital system.

In recent years, the rate of PHI membership and use of private care have declined considerably. We wanted to understand the reasons Australians give to buy or not to buy private hospital insurance and whether they have changed since 2014–15, the last time the Australian National Health Survey asked this question.

During 5–11 April 2021, the Melbourne Institute’s Taking the Pulse of the Nation survey tracked changes in the economic and social wellbeing of Australians living through the effects of the COVID-19 pandemic while adapting to various changes in federal and state government policies. The survey contains responses from 1200 persons, aged 18 years and over. We asked respondents whether they currently have private insurance to cover hospital treatment. If they said yes, we asked the reasons why they purchased PHI. If they said no, we asked the reasons why not. Because hospital cover is more expensive than extras cover, and all government policies only target private hospital cover, we only focus on private hospital cover in this article.

Key insights from Taking the Pulse of the Nation

Respondents who have a job, live in metro areas and are financially comfortable are more likely to buy PHI.

Overall, 60% of our respondents reported they currently have private hospital insurance coverage. This is higher than the 44% result of the Australian population as reported in December 2020, partially because our data only cover adults, not the general population. Levels of PHI membership vary by age and other demographic characteristics, including employment status, financial status, and location (Figure 1).

Figure 1. Percentage of respondents who currently have private health insurance for hospital treatment 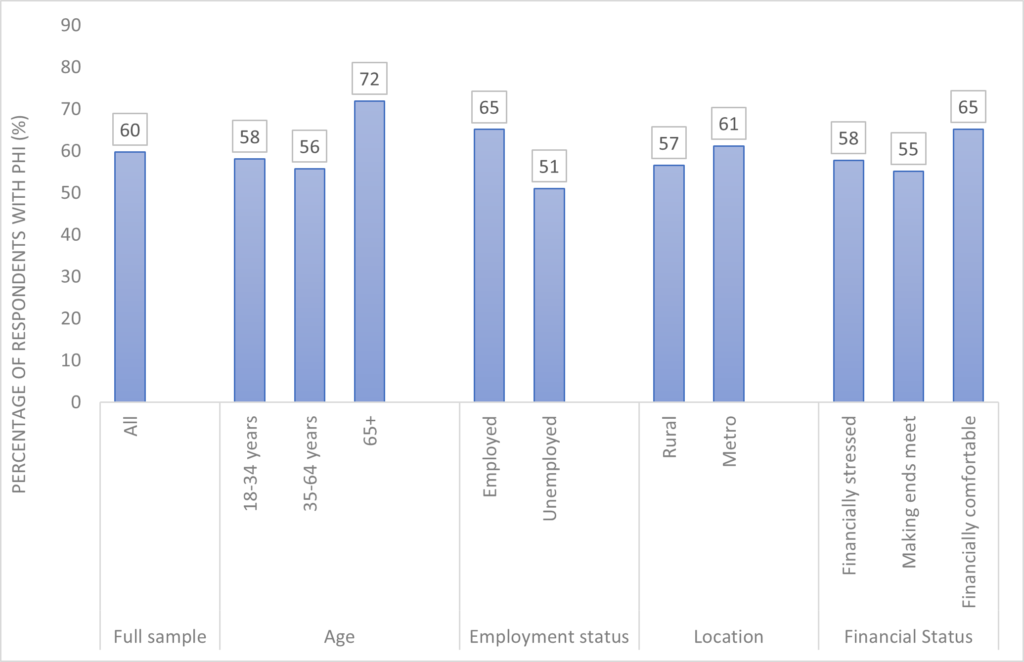 Source: Taking the Pulse of the Nation wave 30 survey data, with 1200 respondents in each wave. The sample is stratified by sex, age and location to be representative of the Australian population. The vertical axis indicates the proportions (%) based on weighted responses. Survey question: “Do you currently have PHI to cover hospital treatment? Yes/No”.

Our data show that the Australians most likely to hold PHI are employed, living in metropolitan areas, and are not in any kind of financial distress.

High insurance premiums and out-of-pocket costs are the most common reasons given for not having PHI.

Among people who do not have PHI, 66% reported they did not purchase it because of high premiums and out-of-pocket costs. The proportion of individuals citing this reason is particularly high among older adults (74%) and among those financially distressed (77%) (Figure 2).

Figure 2. Percentage of respondents without private hospital insurance cited reasons for not having private insurance 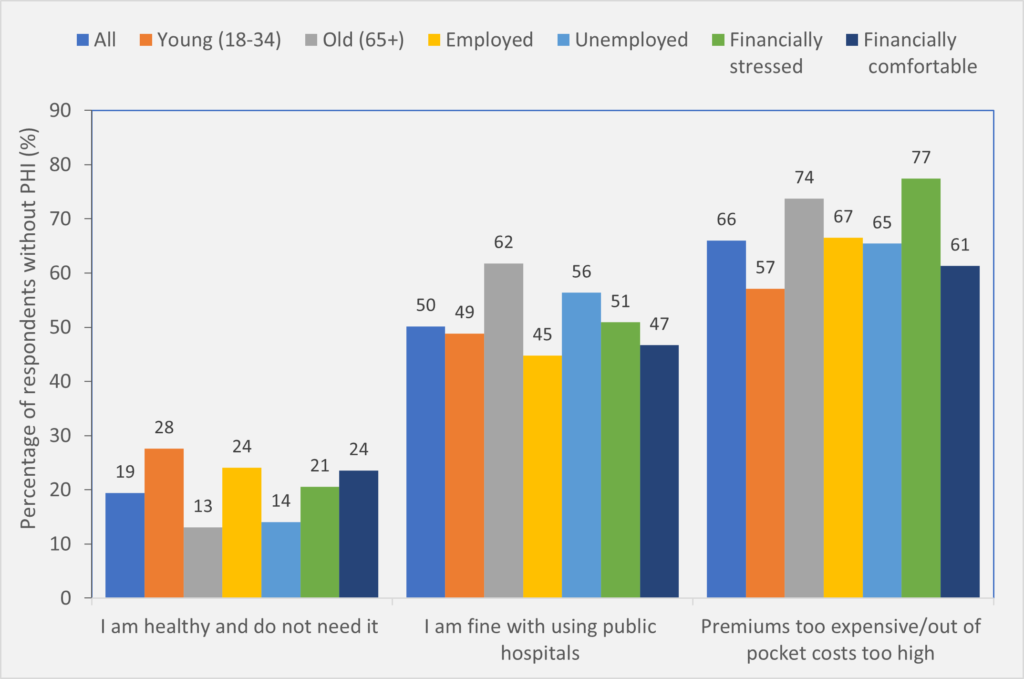 Source: Taking the Pulse of the Nation wave 30 survey data, collected during 5-11 April 2021, with 1200 respondents in each wave. The sample is stratified by sex, age and location to be representative of the Australian population. The vertical axis indicates the proportions (%) based on weighted responses. Among those who don’t have private hospital cover, we asked them reasons why they don’t have it: • I am healthy and do not need it, yes/no • Premiums too expensive and/or out-of-pocket costs of private treatment would be too high, yes/no • I am fine with using public hospitals, yes/no, • Don’t know • Other (a handful; no explanations provided although a few said they were covered under a veteran scheme)

More people are happy to use public hospitals instead of purchasing private cover compared with 6 years ago.

Another common reason for not having PHI is that people are happy to use public hospitals: about half of the Australians that we surveyed cited this as their reason not to purchase PHI. This number has increased substantially since 2014–2015 when, as part of the Australian National Health Survey, respondents were asked about reasons why they bought or did not buy PHI. Only 29% said they did not buy PHI because they believed Medicare cover was sufficient in 2014-2015.

Reasons to buy PHI differ substantially by age and employment and financial status.

Overall, 44% of PHI members said that they purchased insurance for a sense of security, protection or peace of mind (Figure 3). 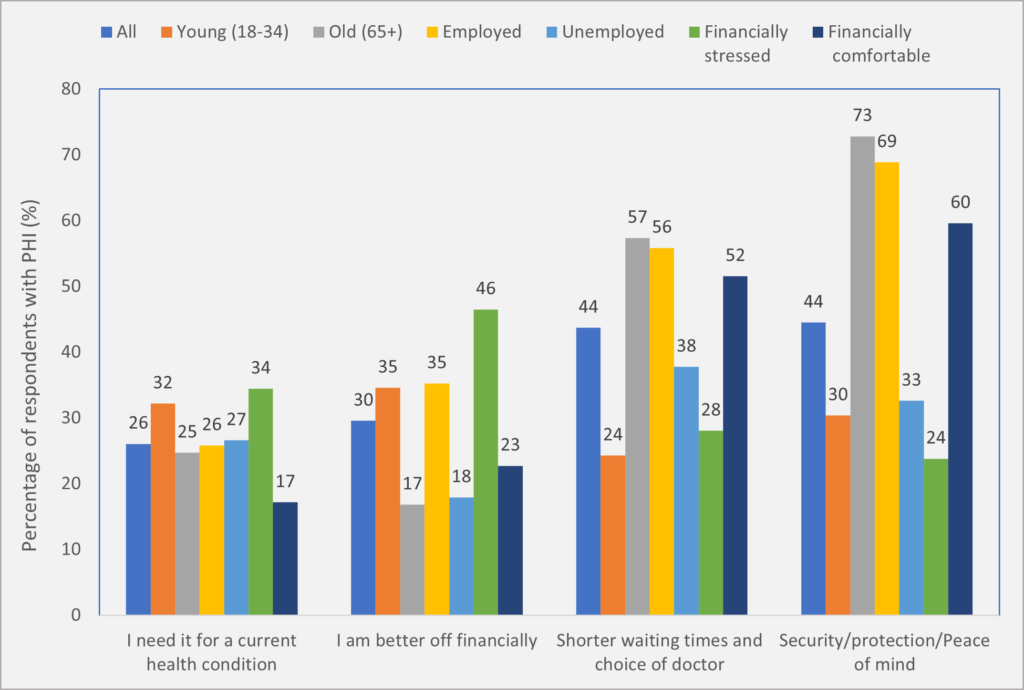 Source: Taking the Pulse of the Nation wave 30 survey data, collected during 5-11 April 2021, with 1200 respondents in each wave. The sample is stratified by sex, age and location to be representative of the Australian population. The vertical axis indicates the proportions (%) based on weighted responses. Among those who currently have private health insurance to cover hospital treatment, we asked them the reasons why they bought private health insurance: • I am better off financially (eg, avoid higher Medicare levy surcharges or gain rebates), yes/no • I need it for a current health condition, yes/no • Shorter waiting times and choice of doctor, yes/no • Security and/or protection and/or peace of mind, yes/no • Always had it and/or some else pays for it (eg, parents or employer), yes/no • Don’t know

However, 73% of people older than 65 years and 69% of those employed cited this as their reason to buy PHI, while only 30% of the young and 24% of those financially stressed cited this reason.

Another common reason relates to the benefits of being treated as private patients in Australia: shorter waits for care compared with waiting time in public hospitals and a greater ability to choose one’s own doctor. Individuals citing this reason are more likely to be older or financially comfortable.

Among the young, the most common reasons are “I am better off financially” due to savings on the Medicare levy surcharge or gains from government rebates, or “I need it for a current health condition”.

The most common reason given for purchasing PHI is peace of mind, which is suggestive of risk aversion. This is surprising given all Australians have access to public hospitals, so people are protected from high financial risk of catastrophic health costs. In Australia, the main benefit to having private cover is not protection from catastrophic health costs, but to reduce wait times in public hospitals. Thus, private hospital insurance is quite different from other insurance industries (eg, car, property), but many people fail to understand this difference. The government could provide more materials to educate individuals.

One common concern in the voluntary private insurance market is adverse selection. That is, individuals know more about their health status than insurers and purchase insurance to cover their needs. But in the Australian PHI market, this does not seem like a major problem. Only 26% of PHI members cited this as a reason to buy PHI. Compared with the old, the young are more likely to buy PHI for their foreseeable health conditions (32% in 18–34 years old v 25% in people aged ≥ 65 years). The most common reason for the young to buy PHI is to respond to government financial incentives – either avoiding the Medicare levy surcharge or gaining rebates.

The Australian Government is currently evaluating ways to encourage more young people to buy PHI. Providing higher rebates or increasing value of PHI to the young may be useful strategies.

Another main predictor to buying PHI is financial situation; for example, people who are financially comfortable are a lot more likely to buy PHI than those financially stressed.

In addition, some subpopulations are more price sensitive (eg, the old and the financially stressed). Thus, government financial incentives (eg, increasing rebates) targeting these subgroups would be more effective.

It is encouraging to see that people are happier to use public hospitals compared with 5 years ago. This may partially explain the recent decline in the rate of PHI and use of private hospitals. The Australian government pays $6 billion per year in rebates to encourage Australians to purchase private hospital insurance and an additional $3 billion to cover private inpatient medical services. What is the justification for large government subsidies to a private industry when all Australians already have Medicare coverage?

Previous policies mainly target increasing the uptake of PHI, but it may be time to evaluate alternative policies. For example, if taxpayers’ money currently used to subsidise PHI is used to support the public hospital system directly, it may improve the efficiency of the entire Australian health care system.

Professor Yuting Zhang is Professor of Health Economics in the Faculty of Business and Economics at the University of Melbourne, and an expert on economic evaluations of health policy and health care reforms.

Dr Kushneel Prakash is a Post-Doctoral Research Fellow at the Melbourne Institute: Applied Economic and Social Research at the University of Melbourne, and works in the area of health economics.

5 thoughts on “What influences whether we buy private hospital insurance?”