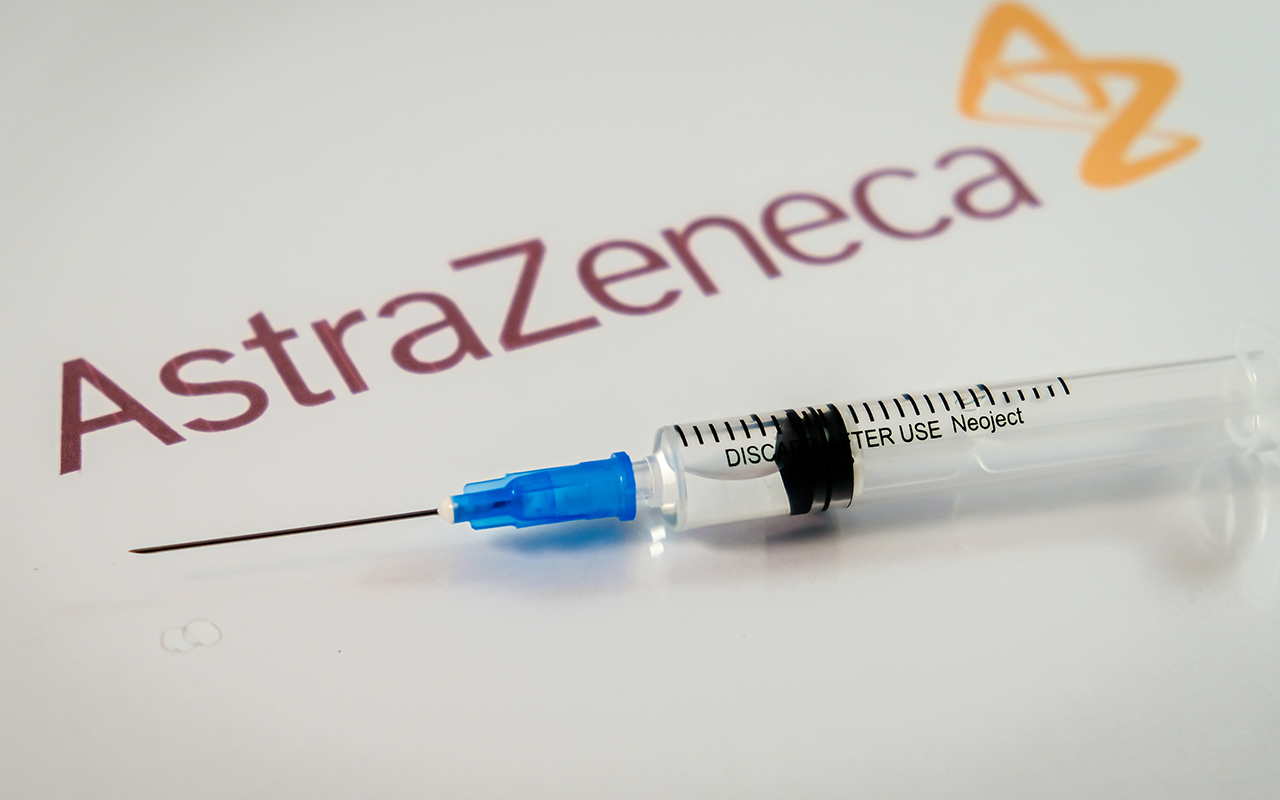 GPs and other vaccinators must help Australians weigh up the rarity of the blood clotting disorder tentatively linked to the AstraZeneca COVID-19 vaccine, against the potentially serious consequences for the unlucky few, and the societal need to protect the community.

On 8 April the Australian Technical Advisory Group on Immunisation (ATAGI) recommended suspension of the use of the AstraZeneca (AZ) COVID-19 vaccine in people under 50 years, following reports of cases of what is now called vaccine-induced thrombocytopenia and thrombosis (VITT).

While it is an option to wait for a Pfizer vaccine, even for those aged over 50 years, Professor Kristine Macartney, Director of the National Centre for Immunisation Research and Surveillance, and a member of ATAGI, told InSight+ that the single most important thing to remember was that COVID-19 “is not leaving the world and we all remain at risk”.

“It’s going to be with us for our lifetimes,” she said.

“We want vaccines to make this virus one that we can live with more comfortably – not having as much severe disease, protecting the vulnerable and being able to reduce overall transmission of the virus in the community.”

While Australia has paused AstraZeneca vaccines for those aged under 50 years, in Germany, the two biggest cities, Berlin and Munich have suspended its use in those under 60 years, Belgium has suspended it in for those under 56 years, and Denmark has stopped giving it altogether. The UK is also offering an alternative to those aged under 30 years.

Although a definitive link between the vaccine and blood clots has not been established, two case series published last week in the New England Journal of Medicine have added weight to the association between the AstraZeneca vaccine and the occurrence of VITT.

The first study involved five cases from Norway who presented with venous thrombosis and thrombocytopenia 7–10 days after receiving the first dose of the ChAdOx1 nCoV-19 (AstraZeneca) vaccine.

“Within 10 days after receiving a first immunization with ChAdOx1 nCoV-19, five health care workers 32 to 54 years of age presented with thrombosis in unusual sites and severe thrombocytopenia. Four of the patients had severe cerebral venous thrombosis with intracranial hemorrhage, and the outcome was fatal in three,” the authors wrote.

“A common denominator in all five patients was a high level of antibodies to PF4–polyanion complexes.

“Collectively, these results suggest that the serum in these patients contained immune complexes with a mixture of antibody specificities similar to those described in the serum of patients with autoimmune heparin-induced thrombocytopenia.

“Our findings indicate a shared pathophysiological basis of the condition in these five patients and should raise awareness that a syndrome similar to autoimmune heparin-induced thrombocytopenia may occur in some persons after vaccination with ChAdOx1 nCoV-19.

“By providing a link between thrombosis and the immune system, these results strengthen the view that vaccination may have triggered the syndrome.”

The second case series involved 11 patients from Germany and Austria in whom thrombosis or thrombocytopaenia had developed after vaccination with ChAdOx1 nCov-19.

“Beginning 5 to 16 days after vaccination, the patients presented with one or more thrombotic events, with the exception of 1 patient, who presented with fatal intracranial hemorrhage. Of the patients with one or more thrombotic events, 9 had cerebral venous thrombosis, 3 had splanchnic-vein thrombosis, 3 had pulmonary embolism, and 4 had other thromboses; of these patients, 6 died. Five patients had disseminated intravascular coagulation. None of the patients had received heparin before symptom onset.”

“Vaccination with ChAdOx1 nCov-19 can result in the rare development of immune thrombotic thrombocytopenia mediated by platelet-activating antibodies against PF4, which clinically mimics autoimmune heparin-induced thrombocytopenia.”

Professor Macartney, while acknowledging the NEJM reports, told InSight+ that a definitive causal link between the AZ vaccine and the rare condition, and the mechanism behind it, had yet to be established.

“We are saying it’s rare across the age spectrum, but it appears to be slightly less rare in people who are younger. Right now, it’s important to remember that at this stage, across the entire world, there’s only been a few hundred cases in what have been hundreds of millions of AstraZeneca doses given out.

“At present, we don’t know of any risk factors that predict the condition because it is new. Based on what we know, it appears to be idiosyncratic, meaning that we cannot predict who will develop it.

“We all hope the answer to that comes quickly because it they may allow us to understand some risk factors which predict the condition.”

Professor Allen Cheng, Professor of Epidemiology and Preventive Medicine at Alfred Hospital and Monash University, is currently Deputy Chief Medical Officer of Victoria. He took to Twitter last week (@peripatetical) to put in perspective the risks of developing VIPIT as a result of vaccination with the AztraZeneca vaccine.

“As a person in their 70s in Australia, if you had gotten COVID last year, on average you’d have a 38% chance of being hospitalised, a 7% chance of going to ICU, and a 10% chance of dying,” Professor Cheng tweeted.

“You could reduce this risk in the future by getting vaccinated. If you get the AZ vaccine, there is a small risk (about 1 in 200 000 people, or 0.0005% chance) that you might get a clotting disorder.

“Or you could wait for Pfizer, which doesn’t seem to be associated with this rare clotting disorder.” 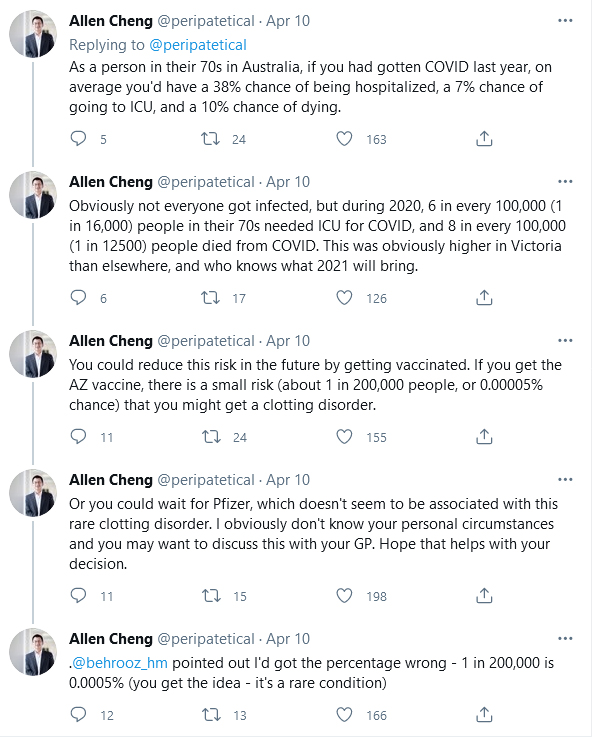 Professor Macartney emphasised the importance of raising awareness of the symptoms of VIPIT.

“We have an obligation to inform people that if they are developing significant new symptoms in this time period after vaccination around four to 20 days, that it is very important that they are medically reviewed,” she said.

“This is not a typical deep vein thrombosis (DVT).

“This condition is serious and is characterised by clots forming in unusual places — either in the draining veins of the brain or in the splanchnic, which is the abdominal vessels.

“It can present as either a severe new headache, or neurologic symptoms, or presents as abdominal pain.”

Professor Macartney told InSight+ that work was continuing in many laboratories around the world to find definitive answers about VIPIT and who was most at risk and why.

“We have a long way to go with this virus, and we will get there, but it’s not going to be quick. It’s a tricky position to be in.”

COVID-19 vaccine hesitancy will increase after the AstraZeneca announcement