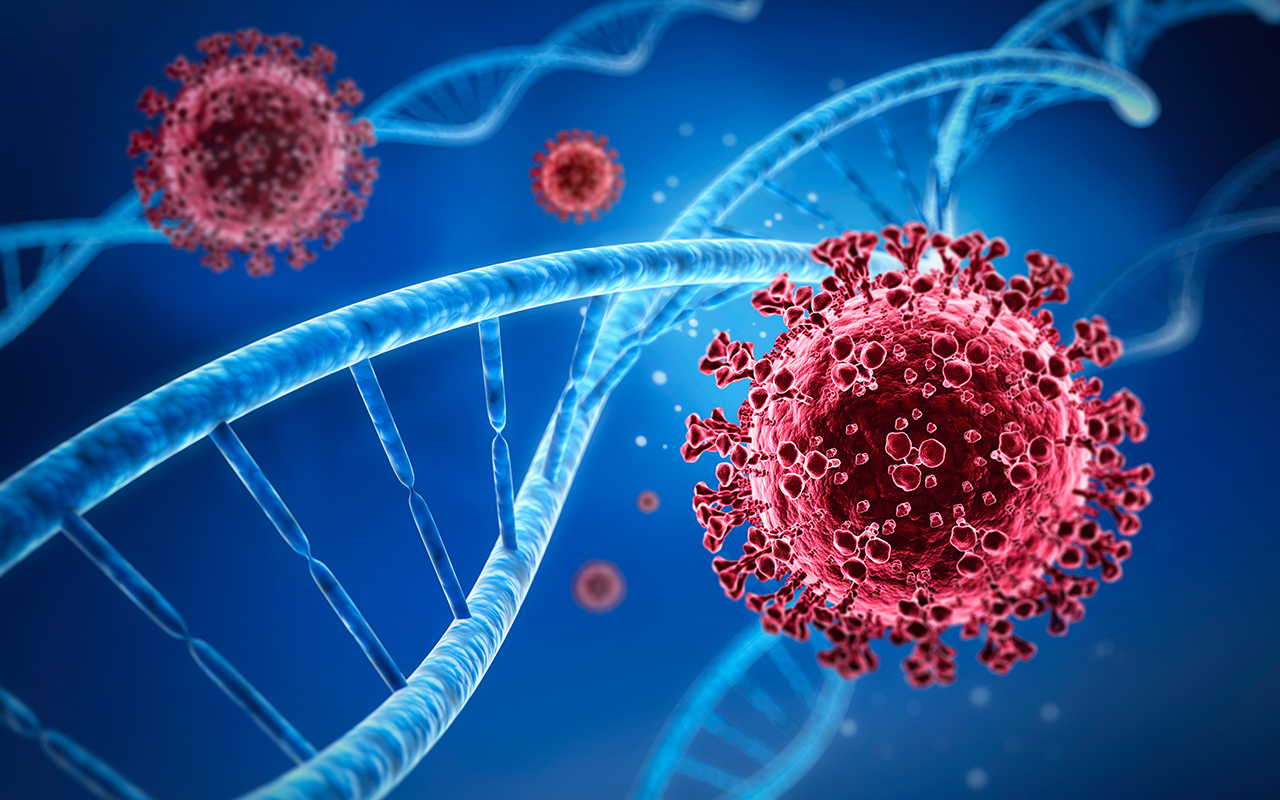 Genetic links revealed between severe COVID-19 and other diseases

An international analysis, including researchers from the South Australian Health and Medical Research Institute, has found genetic links between COVID-19 severity and certain medical conditions that are known risk factors for severe COVID-19. Previous research has identified certain variants in specific human genes that are associated with a person experiencing more severe COVID-19. Some of these variants may also be associated with other medical conditions that may already be well understood; identifying these shared variants could improve understanding of COVID-19 and illuminate potential new paths for treatment. The phenome-wide association study, published in PLOS Genetics, used a dataset of genotypic information linked to electronic health record data for more than 650 000 US veterans. The analysis found particularly strong links for variants associated with venous embolism and thrombosis, as well as type 2 diabetes and ischaemic heart disease — two known COVID-19 risk factors. Also found were genetic links between severe COVID-19 and neutropenia for Veterans of African and Hispanic ancestry; these links did not appear for those of European ancestry. Among respiratory conditions, idiopathic pulmonary fibrosis and chronic alveolar lung disease shared genetic links with severe COVID-19, but other respiratory infections and chronic obstructive pulmonary disease did not. Some variants associated with severe COVID-19 were also associated with reduced risk of autoimmune conditions, such as psoriasis and lupus. These findings highlight the need to carefully weigh various aspects of the immune system when developing new treatments, the authors concluded. “The nature of the associations brought to light how the SARS-CoV-2 virus pushes on a pressure point in the human immune system and its constant balancing act of fighting infection while maintaining enough control so that it does not also become an autoimmune process, attacking self.”

At least 15 000 new cross-species viral transmissions are forecast to happen by 2070, driven by climate change of a 2°C warming scenario, according to an article published in Nature. These increased opportunities for viral sharing may increase the risk of emerging infectious diseases jumping from animals to humans in the next 50 years, especially in Africa and Asia. The findings highlight the need to combine viral surveillance with assessments of changes to species range as a result of climate change, especially in tropical regions that are home to most of the infectious diseases that are capable of being transmitted from animals to humans. As the climate warms, many animal species will be driven to new environments, taking their parasites and pathogens with them. These geographical shifts may facilitate viral sharing between species that previously had no interactions, which may in turn assist zoonotic spillover. The researchers, from Georgetown University, looked at how the geographical ranges of 3870 mammal species might change in response to different climate scenarios by 2070. They used a model of mammalian viral sharing patterns to make predictions about future opportunities for cross-species viral transmission in a subset of 3139 animals. Novel encounters between mammal species are expected to occur everywhere in the world, but will be concentrated in areas of high human population density in tropical Africa and south-east Asia. These novel virus sharing events are predicted to be driven predominantly by bats, which are likely to harbour viruses with a high chance of being transmissible to humans. With warming already occurring, climate-driven shifts in hotspots for species dispersal and viral evolution may already be underway, the authors noted. Targeting surveillance in future hotspots may help to identify infectious diseases jumping between species, the authors concluded.

Research presented at the European Congress of Clinical Microbiology and Infectious Diseases last week has found that the number of antibiotics prescribed in Australia fell by up to 38% during the COVID-19 pandemic. Dr Jack Skeggs and colleagues at Monash Health looked at rates of outpatient antibiotic prescriptions across Australia before and during the pandemic. The analysis of a representative sample of 10% of outpatient antibiotic prescriptions issued from January 2014 to April 2021 showed that before the pandemic there was a clear seasonal variation in prescribing. Before 2020, antibiotic prescribing was 29% higher on average during the winter months of June, July and August than in the summer months of December, January and February. This seasonal variation disappeared during the pandemic. The number of prescriptions dropped sharply as national restrictions were implemented in Australia at the start of the COVID-19 pandemic in March 2020 and remained lower than usual during the entire period studied. In winter 2020, there were 38% fewer antibiotics being prescribed each month than in the winters of 2018 and 2019 (1 432 000 prescriptions per month v 2 313 000). This was even lower than the usual summer: during the pandemic average winter month prescribing was 21% lower than pre-pandemic summer month averages. The summer of 2021 showed a 23% reduction in prescriptions compared with the summers of 2018 and 2019 (1 374 000 prescriptions per month v 1 817 000). Further analyses revealed that 84% of winter and 97% of summer decreases were driven by reductions in GP prescribing, despite GPs carrying out the same number of consultations as usual. In other words, the reductions in antibiotic prescriptions were not driven by patients being unable or afraid to see their GP. In addition, reductions in antibiotic prescribing occurred in all states and territories despite significant differences in COVID-19 case numbers and duration of lockdowns. For example, South Australia, in which there were no lockdowns during the study period, and Victoria, where stay at home orders were in place for 208 days in 2020, experienced comparable reductions in prescribing. “It suggests that the reductions were not dependent on high case numbers or the most onerous social distancing measures like lockdowns and it may therefore be possible to maintain some of the decreases after the pandemic,” said Dr Skeggs. “Existing community antimicrobial stewardship programs, community education related to personal hygiene and handwashing, culture shifts in mask wearing and social distancing and, possibly, reduced prescribing for viral syndromes may all play a role. However, the finding that significant reductions existed in states without high case numbers or lockdowns is promising and suggests that we may be able to maintain at least some of these decreases after the pandemic by encouraging these same culture shifts.”