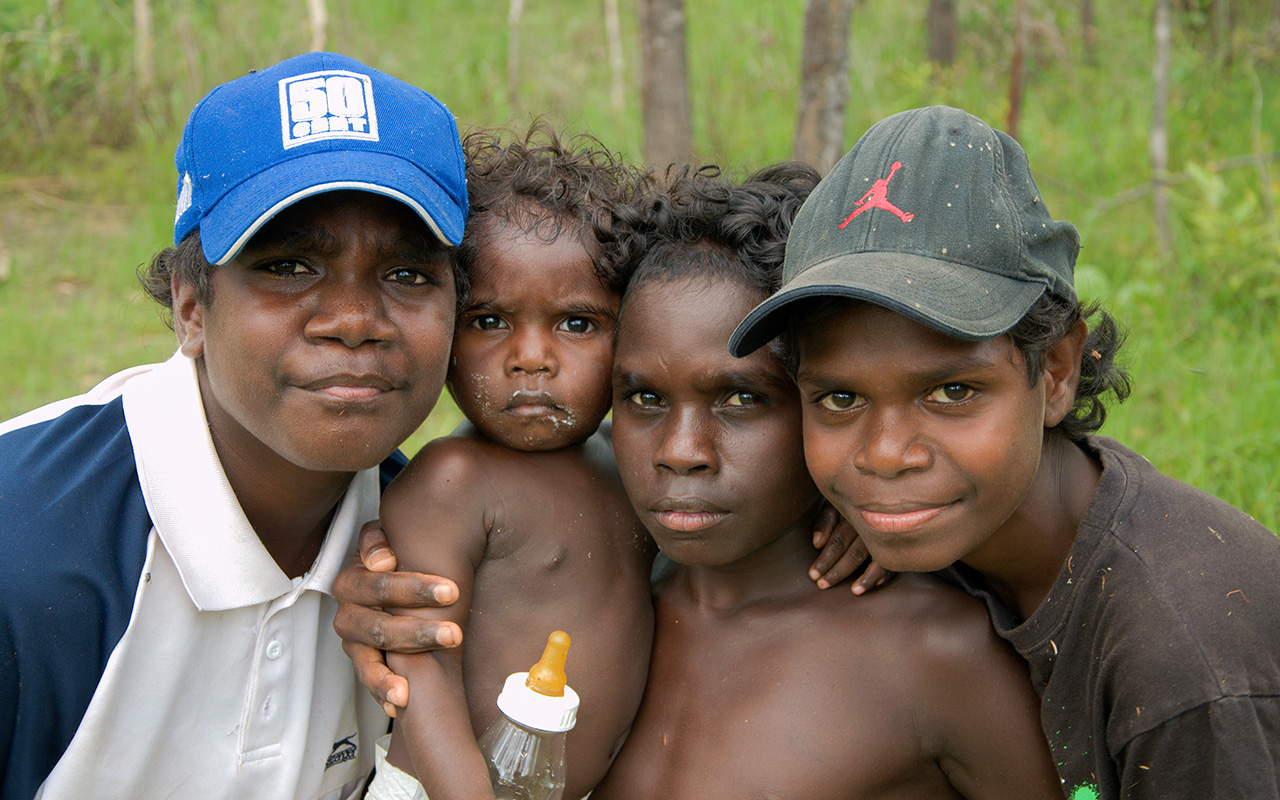 “Our children don’t have a future”: the burden of RHD

THE mayor of a remote Aboriginal community in Arnhem Land has said the town’s children “don’t have a future” unless governments boost their investment in tackling the social determinants driving one of the world’s highest rates of rheumatic heart disease (RHD).

“I shouldn’t put it so bluntly, but [our children] don’t have a future. If we don’t get the housing situation right, the health and education right, then you have missed the boat,” Mr Ryan told InSight+. “We are playing catch-up every step of the way.”

The prevalence of RHD in some remote Indigenous communities in Australia ranks alongside rates in some of the poorest countries in the world, according to an expert who is hopeful that a community-led strategy will eliminate the preventable disease here by 2031.

Professor Jonathan Carapetis, Director and Head of the Group A Streptococcal and Rheumatic Heart Disease Team at the Telethon Kids Institute, said Australia was “on top of the league table in terms of the rate per head of population”.

“The rates of RHD [in some communities] are as high as we see in sub-Saharan African countries, or Pacific countries,” Professor Carapetis said in an exclusive InSight+ podcast.

Professor Carapetis and Professor Alex Brown of the South Australian Health and Medical Research Institute have authored an MJA editorial to accompany research that has found that up to 10% of children and adolescents in Maningrida, in West Arnhem Land, have been diagnosed with RHD or definite or probable acute rheumatic fever (ARF).

“No condition is more emblematic of ‘the Gap’: in Australia, the burden of RHD is borne almost exclusively by Indigenous people, with rates amongst the highest in the world,” they wrote in the editorial.

“It is a disease with social determinants, including poverty and overcrowded housing, it starts in childhood but stretches into adulthood, it kills people prematurely, and, most devastatingly, it is preventable.

“The major impediments to it being controlled or even eliminated are lack of commitment, funding and coordination, not lack of knowledge.”

Lead author of the MJA research, Dr Joshua Francis, paediatric infectious diseases physician at the Menzies School of Health Research, said after working in the Maningrida community for several years, he was aware that RHD was a major problem. But he was still surprised by the scale of the problem uncovered by the echocardiographic (echo) screening program.

Dr Francis and his co-authors reported that an echo screening program of 613 people aged 5-20 years in Maningrida found definite RHD in 32 participants (5.2%), including 20 previously undiagnosed cases, and borderline RHD in 17 participants (2.8%).

The researchers reported that the total prevalence of definite RHD or definite or probable ARF in Maningrida was at least 10% in those aged 5-20 years.

“I was in Maningrida [earlier this month] and attended the funeral of a very young person,” Dr Francis said, adding that he felt privileged to have been welcomed into the community. “It just is such a feature of daily life in communities like Maningrida, where people die young from complications of disease that is well and truly over-represented in Aboriginal and Torres Strait Islander people in Australia.”

While it was uncommon for children in Australia to die from RHD, Dr Francis said there were too many young children who required major heart surgery and had “terrible complications from RHD”.

Of five children in the study who were newly identified with severe RHD, three had mitral valve surgery within 6 months of their diagnosis, the researchers reported.

“And then, when these kids are older, they may develop heart failure, stroke or some other complication from this preventable disease,” Dr Francis said. “We are seeing not just a gap in life expectancy of 10 years, but people dying in their 20s and 30s.”

In the InSight+ podcast, Professor Carapetis said: “The critical point here is that we have no evidence that Indigenous people in Australia are more susceptible than anyone else to ARF or RHD.

“It’s … basically because they get exposed a lot more [Streptococcus A] bacterium that causes AFR. And why do they get exposed more? Because of overcrowded living conditions, because of the poor hygienic conditions that people live in, particularly in remote settings, because of impeded access to health care. So, basically, [RHD] is a disease of … the social determinants of health, and that’s the critical aspect that we have to come to terms with.”

Mr Ryan applauded the work of Dr Francis and the Menzies research team in raising awareness of the high burden of RHD in the Maningrida community.

“It was shocking and surprising to hear this. My team in West Arnhem acknowledge the hard work that Josh and the Menzies research team have done in exposing this,” he said.

“Unfortunately, the government is not doing enough to address these issues – it’s really frustrating. As a parent as well, I am constantly worrying about my family and my children.”

Professor Carapetis said he had been involved in efforts to prevent rheumatic heart disease for “more than a couple of decades”.

“We just need to take a dramatically different approach to what we have taken up until now,” he said. The editorial pointed to modelling that showed that unless Australia altered course, more than 10 000 Indigenous Australians would develop RHD over the next 11 years, of whom 563 would die and 1370 would require heart surgery.

A new approach to preventing RHD is soon to be outlined in The RHD Endgame Strategy: the blueprint to eliminate rheumatic heart disease in Australia by 2031.

“We have essentially all the organisations in the one place who need to both advocate … [and] be doing the work on the ground,” Professor Carapetis said. “The critical aspect is that it has to have Aboriginal leadership. There is absolutely no doubt and this will be enshrined in the new Closing the Gap principles that are soon to be announced – anything that relates to Aboriginal people and Aboriginal health has to be led by Aboriginal people.”

Dr Francis said community leadership and engagement had been central in the Maningrida study.

“The community had recognised that there was a significant problem with RHD and wanted to do something in the community to tackle it and didn’t want it to be one-dimensional,” he said. “So, this isn’t just about the echo screening, it’s about training local health workers how to recognise and diagnose RHD. It’s been about implementing education modules in school in local languages around health and hygiene and RHD. It’s been about getting multiple sectors in the community together, with really strong leadership from the West Arnhem Regional Shire Council, from the local Traditional Owners and Elders, from the Bawinanga Aboriginal Corporation, from Malal’a Health Service, and from the schools and the clinic.

“For me, it’s been really exciting to be part of such community momentum to tackle something that’s recognised by the community as a problem.”

Dr Francis said the discussions in Maningrida hadn’t been confined to that community, with hope that local efforts would have a broader impact in reducing the burden of RHD in Australian communities and beyond.

“Some of the Aboriginal health workers who trained in Maningrida have travelled to Timor-Leste and contributed there as well,” Dr Francis said. “It was a great opportunity for them to be able to contribute their knowledge and expertise in a country like Timor-Leste with a great amount of need as well.”

Mr Ryan said that he was hopeful that the strategy would successfully eliminate RHD from Maningrida and in other Top End communities but recognised that there were significant challenges ahead.

“I’m hopeful, but I am doubtful,” he said. “The reason for my doubt is that it takes a whole community to tackle this situation … you have to look at the housing situation, you have to look at the income, what the parents have to support the little ones. Not all family members are educated enough about what is happening; people are saying it’s the ‘norm’, but it’s not. It will take a collective of people to eradicate rheumatic heart disease.”

Mr Ryan agreed that community leadership would be key in tackling this issue, as would federal and Northern Territory government investment.

“Community leadership is very important,” he said. “We all need to be educated about how RHD develops. Everybody needs information in their own languages, so we can all be on the same page.

“It also needs more government support. The federal and Northern Territory governments need to invest more if we are to eradicate RHD.”

6 thoughts on ““Our children don’t have a future”: the burden of RHD”