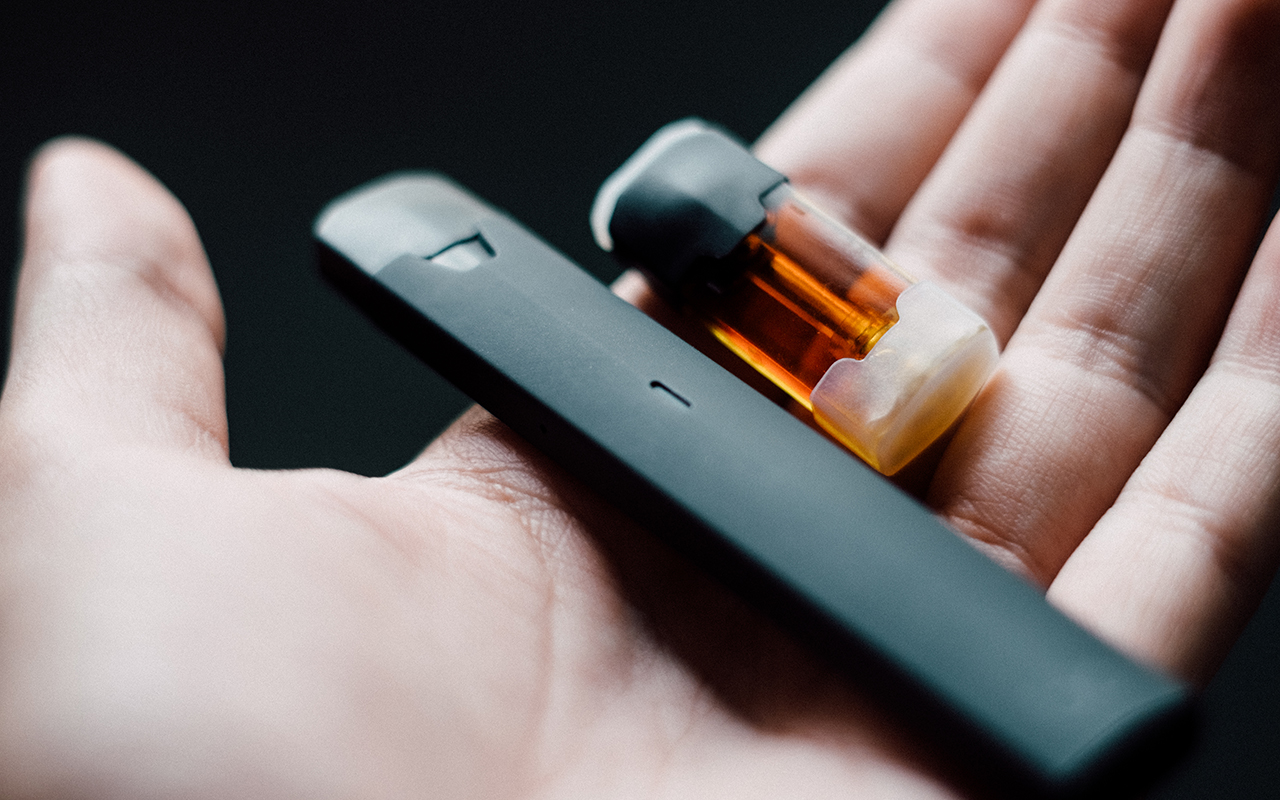 A US outbreak of severe lung disease associated with the use of tetrahydrocannabinol-containing (THC) products with vitamin E additives has prompted a spokesperson from the Australian Medical Association (AMA) to double down on warnings about e-cigarettes, saying their use remained in “Wild West” territory.

A Perspective in the MJA outlined the latest findings on the 2019 outbreak of the newly described condition “e-cigarette or vaping product use-associated lung injury” (EVALI).

The epidemic – which between March 2019 and Feb 2020 has resulted in over 2800 hospitalisations in every US state and territory, and 68 deaths – was at first thought to be associated with nicotine-containing solutions used in e-cigarettes, but has since been linked to vaping THC oil contaminated with vitamin E acetate.

In June 2020, the federal government announced that the existing ban in all states and territories on the sale of e-cigarettes containing vaporiser nicotine would be maintained for a further 6 months.

Nicotine-based e-cigarettes can only be legally imported with a prescription from a doctor.

In making the announcement, Minister Hunt noted: “The Victorian Poisons Centre reported a near doubling of nicotine poisons between 2018 (21 cases) and 2019 (41 cases), primarily caused by imported products of dubious safety and quality. A Victorian toddler died from nicotine poisoning in July 2018.”

The authors of the MJA article noted that 84% of the reported THC products were acquired via “informal channels” and were “probably manufactured outside of regulated facilities”.

The authors said that it had become “abundantly clear” that use of illicitly sourced e-cigarettes can be dangerous.

Lead author Dr Eli Dabscheck, respiratory and sleep physician at Alfred Health, said in an InSight+ podcast that no cases of EVALI had been reported in Australia, but it was “certainly … possible”.

“Any time you are smoking something and you don’t know where it’s from or what’s in it; any time you are ingesting any product by any route into your body, there is a chance of contamination,” he said.

“The AMA had appeared to be party poopers in its guarded concerns about the use of e-cigarettes and the lack of, or only rudimentary, evidence of any benefit in quitting smoking,” said Dr Moy, who is also Chair of the AMA Ethics and Medico-Legal Committee.

“This paper backs up the AMA’s position that there is cause for concern, with the possibility that people using e-cigarettes can develop acute lung disease and respiratory failure.

“Unfortunately, in trying to tame the smoking rate, Australia has had a relatively relaxed approach to e-cigarettes and vaping and now it is clear that we are in Wild West, cowboy territory.”

Professor Wayne Hall, Professor at the Centre of Youth Substance Abuse Research at the University of Queensland, warned that initial reports that the probable cause of EVALI was nicotine-containing e-cigarettes – rather than illicit cannabis oil contaminated with vitamin E acetate – had contributed to a “regulatory over-reaction” to the outbreak.

In an article published in Addiction in May, Professor Hall and colleagues wrote:

“Some public health advocates have used the EVALI outbreak to advocate for precautionary prohibitions on the sales of flavourings for nicotine vaporizers and, in some cases, a ban on the sale of all vaporizers. There are better policies to reduce adolescent nicotine vaping and prevent lung injuries caused by vaping illicit cannabis products.”

Professor Hall said Australia was in danger of taking a prohibition stance on e-cigarettes, which could increase the risk of harm, including future episodes of EVALI.

“If you look at the EVALI outbreak in the US, it occurred primarily in the illicit market,” he said. “If we make e-cigarettes wholly into the illicit market – which we look like doing – we might reduce the overall prevalence of use, but at the risk of increasing the likelihood of these sorts of events occurring.”

Professor Hall said a more desirable policy approach would be to restrict access to e-cigarette products to minimise uptake among young people, which was the approach taken by New Zealand and Canada.

“I wouldn’t like to see the situation that prevails in the US and the UK where these products are sold in corner stores and supermarkets and petrol stations and so on,” he said. “I think it’s something that you would want to restrict to maybe tobacconists or even adult shops.”

Professor Hall also noted that the advice from Australia’s Chief Medical Officer and State and Territory Chief Health Officers about e-cigarettes had yet to be updated to reflect the fact that EVALI had been linked with illicit THC adulterated with vitamin E additive.

He said there had also been reports of bronchiolitis obliterans associated with other ingredients used in e-cigarette preparations, such as popcorn flavouring.

Professor Thomas said the jury remained out on the long term safety of e-cigarettes.

“After all,” he said. “Commercial cigarette smoking continued for about 80 years before the link with lung cancer was made in the 1950s, so the effects of a product that is inhaled may not show up for many decades.”

Professor Thomas said many “august bodies”, including the Royal College of Physicians (RCP), had stated that e-cigarettes were a safer option than smoking tobacco cigarettes because fewer components were being inhaled.

“The problem with this outbreak of EVALI is that it shows these vaping solutions can contain lots of different ingredients. Solutions with cannabinoids obviously are using lipoids as a way of delivering the THC, but the others include all sorts of ingredients to give them different flavours, and there is no regulation, so it is therefore, it is unclear what people are inhaling.”

Professor Thomas said he had changed his view on the potential role of e-cigarettes in smoking cessation.

“I used to think it’s probably helpful as an aid for smoking cessation, along the lines of the RCP position, but I think really it’s such a mess to be honest,” he said. “Vaping is probably not a good idea. I think we are better off using the more conventional nicotine replacement [products].”

“E-cigarettes may be perceived by young people as a ‘cool new gadget’ and ‘safer than smoking’,” the MJA authors wrote.

The Sydney Morning Herald reported earlier this month that school principals were sounding alarm bells about increasing use of e-cigarettes – also called “JUULING”, referring to a particular brand of e-cigarette – among adolescents.

The report noted that teachers had caught students as young as Year 7 vaping or even “becoming dealers”.

Professor Hall said determining the prevalence of e-cigarette use among adolescents was “a problem”.

“I don’t doubt that principals are reporting from experience, it’s just a question of how many kids in how many schools, and that’s a much harder question to answer,” he said. “The survey data here suggests lower rates of use because these products are much harder to obtain. Even ones that contain nicotine are much harder to obtain because they are illegal, and smokers are not using them as frequently in Australia as they are in say the UK or the US. I am not saying it’s impossible, but it’s harder, and it would be all through quasi-illegal mechanisms that people are getting hold of them.”

Dr Moy said it was concerning that e-cigarette use appeared to be increasing among young people.

“This is like playing Russian roulette. We know that kids feel invulnerable, but they are at risk of developing sudden severe lung disease, and this is an emerging piece of the puzzle about the real effects of vaping. We don’t know what the long term effects might be on other organs; will there be kidney effects, low level brain effects? Who knows?”

Dr Moy added that the use of appealing flavours showed that e-cigarette manufacturers were taking a similar approach to the alcohol industry in marketing “mixer drinks” to teenagers.

The MJA authors concluded that adults using nicotine-containing e-cigarettes as an alternative to cigarette smoking should not revert to tobacco smoking.

“A reasonable and precautionary strategy is to advise patients that little is known about the long term effects of e-cigarettes, and also to inform users that severe lung disease and death have occurred mainly with unregulated solutions.”

The experts that InSight+ spoke to all agreed that this was a reasonable and balanced approach to the issue.