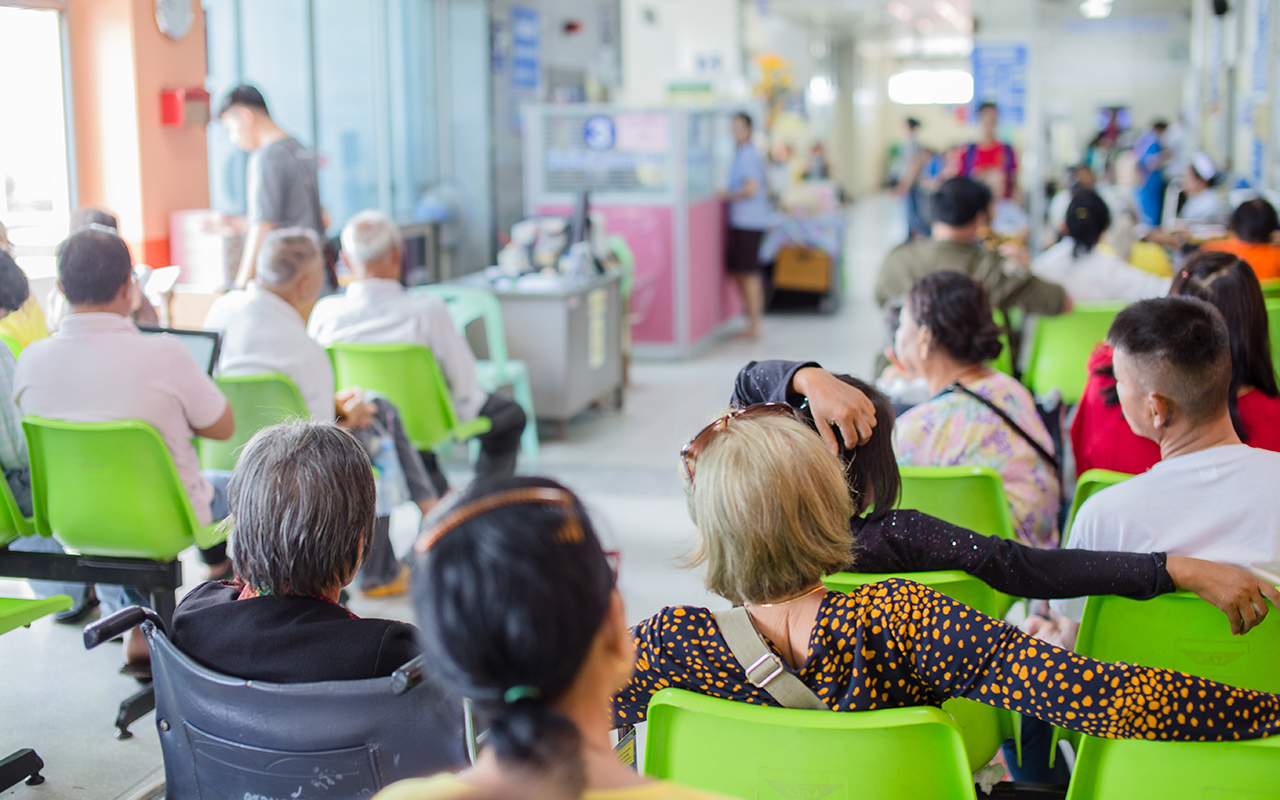 Patients presenting to hospital emergency departments are at a higher risk of death if it takes more than 5 hours to admit them, according to a British study published in the Emergency Medicine Journal. While the UK and Australia aim to keep ED wait times below 4 hours, this target is not always met. Analysing 5 million hospital admissions in the UK between April 2016 and March 2018, international researchers looked at the rate of death by any cause within 30 days of presenting to hospital compared with how long each patient was waiting in the ED. The researchers found a statistically significant higher death rate for those waiting longer than 5 hours; for every 82 patients who waited beyond 6-8 hours for a bed an additional patient died. While the researchers noted 30-day all-cause death is a “crude” way to measure outcomes, the results reinforced the need for wait time targets. during the study period, 26 738 514 people attended an emergency department in England: 5 249 891 of them were admitted to hospital. In all, 433 962 people died within 30 days during the study period. The overall unadjusted 30-day death rate was just under 9%. The average age of patients admitted was 55 years; the number of concurrent conditions rose in tandem with increasing age. Nearly twice as many patients came from areas of greatest deprivation as came from areas of least deprivation. The most frequent time of arrival was between 12:00 and 17:59 hours, with the first 3 months of the year accounting for the biggest proportion of patients. The average wait in the emergency department was just under 5 hours; the breach rate of the 4-hour waiting time target averaged around 38%. This was an observational study, and as such, ws not able to establish cause and effect. But, the researchers noted: “Despite limited supporting evidence, there are a number of clinically plausible reasons to accept that there is a temporal association between delayed admission to a hospital inpatient bed and poorer patient outcomes …”

Saline as effective as “balanced” solutions for keeping people alive

New research, published in the New England Journal of Medicine, on intravenous (IV) fluids used in intensive care shows that commonly used saline is as effective at keeping people alive and their organs functioning as more expensive “balanced” solutions. Balanced multielectrolyte solution (BMES) is a type of IV fluid that more closely matches the body’s normal levels of certain minerals. Use of BMES has increased since concerns were raised about increased rates of kidney injury and death associated with saline, although this had not been proven in clinical trials. To address this uncertainty and to help doctors choose the best fluid for their patients, researchers from the George Institute for Global Health designed and led a large clinical trial involving over 5000 patients across 53 sites in Australia and New Zealand. They recruited adult patients admitted to participating ICUs during the study period who needed IV fluid resuscitation for their underlying medical condition. The patients were followed for a period of 90 days after treatment, as previous research had shown around one in four would be at risk of dying within this time frame. The research team primarily looked at rates of death in patients who received BMES or saline while they were in the ICU. At 90 days after the treatment, the same number of patients in the BMES and saline groups had died. The number of days that the patients required mechanical ventilation or kidney dialysis, their survival time in the ICU and in hospital, as well as major measures of health care costs were similar between the groups. “We found no evidence that using a balanced multielectrolyte solution in the ICU, compared to saline, reduced risk of death or acute kidney injury in critically ill adults,” wrote the authors.

A single blood sample from a critically ill COVID-19 patient can be analysed by a machine learning model which uses blood plasma proteins to predict survival, weeks before the outcome, according to German research, published this week in PLOS Digital Health. Health care systems around the world are struggling to accommodate high numbers of severely ill COVID-19 patients who need special medical attention, especially if they are identified as being at high risk. Clinically established risk assessments in intensive care medicine, such as the SOFA or APACHE II, show only limited reliability in predicting future disease outcomes for COVID-19. The researchers studied the levels of 321 proteins in blood samples taken at 349 time points from 50 critically ill COVID-19 patients being treated in two independent health care centres in Germany and Austria. A machine learning approach was used to find associations between the measured proteins and patient survival. Fifteen of the patients in the cohort died; the average time from admission to death was 28 days. For patients who survived, the median time of hospitalisation was 63 days. The researchers pinpointed 14 proteins which, over time, changed in opposite directions for patients who survived compared with patients who did not survive on intensive care. The team then developed a machine learning model to predict survival based on a single time point measurement of relevant proteins and tested the model on an independent validation cohort of 24 critically ill COVID-10 patients. The model demonstrated high predictive power on this cohort, correctly predicting the outcome for 18 of 19 patients who survived and 5 out of 5 patients who died (AUROC = 1.0; P = 0.000047). The researchers concluded that blood protein tests, if validated in larger cohorts, may be useful in identifying patients with the highest mortality risk, as well as for testing whether a given treatment changes the projected trajectory of an individual patient.

Combining bacteriophage therapy with antibiotics markedly improved the condition of a 30-year-old patient with a fracture-related, pandrug-resistant Klebsiella pneumoniae infection, according to a study published in Nature Communications. The case study demonstrated the promise of bacteriophage treatments for drug-resistant bacterial infections. Pandrug-resistant bacteria — or “superbugs” — are resistant to all commercially available antimicrobial agents and are an increasing public health threat as treatment options are limited. An alternative approach is to use bacteriophages, a type of virus that infects and kills bacteria. Researchers from the CUB-Erasme Hospital in Brussels reported the results of a 6-day course of bacteriophage therapy for a 30-year-old female victim of a bombing with a fracture-related, pandrug-resistant K. pneumoniae infection for whom antibiotic treatment had failed for nearly 2 years. The authors selected and adapted a bacteriophage for optimal killing of the bacteria, specific to the strain of K. pneumoniae that had been recovered from the patient. A combination of this pre-adapted bacteriophage — applied locally to the wound — and antibiotics was used. Three months later the patient’s general condition had improved, the wound was healing and no evidence of bacterial infection was found. Three years after the phage–antibiotic combination treatment, the patient had regained mobility and was able to participate in sporting events. Although this case study demonstrates the potential of bacteriophage therapy, complex personalisation of treatment is likely necessary, making application for larger patient groups challenging, the authors concluded.

Healthcare workers have a right to feel abandoned by government