Who are the “missing middle” of mental health care?

WHILE acknowledging the federal government’s more generous than usual mental health funding, it is reasonable to say that around two-thirds of the $2.2 billion commitment made in the most recent federal Budget was directed towards business as usual.

By this we mean continuation of current Medicare funding and direct support for a select group of national organisations already holding government contracts. Even the very considerable and welcome boost for national community services for those who have attempted suicide is basically an expansion of existing efforts.

Despite rhetoric about structural reform, the government’s main effort boils down to the establishment of a suite of new community mental health treatment hubs ($541 million). Specifically, the budget delivers funding over the next 4 years for:

Many inquiries, such as that recently conducted by the Productivity Commission (2020), have pointed to the absence of community mental health care as a key deficit in Australia’s broken mental health system. So, this new emphasis is most welcome.

However, and only days after the federal Budget, the Victorian Government then released its state budget, which included a whopping $3.8 billion allocation to mental health, in response to that state’s own Royal Commission recommendations. One large chunk of this spending was the first tranche of funding for new community mental health services, as follows:

Who are the new services for?

Leaving aside key issues regarding planning and coordination between the different levels of government, and not forgetting Australia has nine jurisdictions not two, these competing budget announcements raise a fundamental question: who are these new services for?

The consensus appears to be a group of people called “the missing middle”, with both the Productivity and Royal Commission reports using this term to describe a group of clients too complex for primary care and basic psychology services, but not unwell enough to qualify for acute admission or ongoing management by state-run mental health services.

As there are so many gaps in our system, it may seem unreasonable to critique one aspect; however, the missing middle thus described seems particularly loose.

To what extent would a better (any) response to the missing middle result in reduced pressure on acute services? Do people with acute schizophrenia, recurrent bipolar disorder, or severe depression discharged from acute care become part of the missing middle in that they still clearly need community mental health care to prevent or relapse or readmission? To what extent do people in this missing middle recover, or is the goal simply better management of chronicity?

While policymakers, funders and academics contemplate this complexity, it is possible in Australia to find very rare examples of services already operating effectively in this chasm. They typically perform financial and organisational gymnastics at an Olympic level, cobbling together disparate streams of funding and service to meet client needs, despite the systems they operate within.

An island in the missing middle

One example highlighted by the Royal Commission is First Step, a for-purpose mental health, addiction, and legal services hub operating for 20 years in the heart of St Kilda, Victoria, and seeing about 2500 people a year. About 20% of First Step’s funding is derived from four separate streams of Medicare funding (Medicare Benefits Schedule, Practice Incentive Payments, Workforce Incentive Payments and Better Access). Another 35% comes from four separate streams of Primary Health Network Funding, each with distinct relationships and lines of accountability. Around 30% comes from five streams of funding from the Victorian Government across two departments. And finally, some 15% of funding comes from 15 separate philanthropic trusts, essential to keeping the doors open.

The funding model underpinning this service typifies the complex and byzantine arrangements that many mental health organisations must establish to survive. The energy and transactional costs are colossal. The resulting instability inhibits longer term planning and workforce development.

First Step has its origins in supporting people with co-occurring mental ill-health and addictions, precisely the type of complex yet common comorbidity that is well beyond the very limited scope of single practitioner, fee-for-service Medicare-backed interventions provided by most GPs, psychologists and private psychiatrists. These people typically live in our communities with levels of distress and impairment below the threshold required for acute admission to state-funded services.

Importantly, the clientele includes people who grew up in out-of-home care, people who are homeless (including rough sleeping), people at risk of violence and self-harm, and survivors of childhood neglect and abuse, among other complex characteristics. First Step recognises six key domains for action and directly addresses five of these, with housing support provided through referral and collaboration (see Figure 1 below, noting the professions/support areas under each). 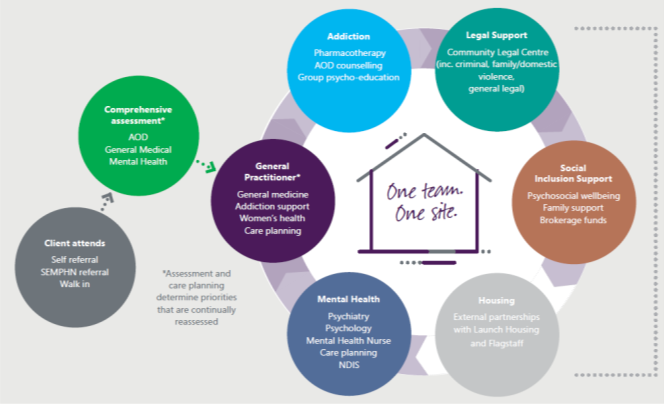 Let’s consider some of the key componentry for this kind of complex service to be established and successful.

Many people with complex mental health problems face financial difficulties. First Step provides care at no cost to the client. The multidisciplinary workforce realises First Step’s funding mix may never make them wealthy. However, they are stimulated by the collaborative and collegial environment and the opportunity to see the positive impact they have on clients’ lives. Highly skilled clinical and non-clinical staff meet face to face on a daily, sometimes hourly, basis to plan and implement coordinated and person-centred care for as long as it is required.

But having a GP, psychologists, psychiatrists, a lawyer, a psychosocial support worker, and others work as a team is not simply a matter of putting them in the same building. Frameworks are required for role clarity and to maximise impact. Team size (not too big) and close proximity are key. Staff need to know each other and to be able to walk across the corridor to engage their colleagues.

Long term engagement permits the establishment of trust between client and treating team, as well as the development of long term relationships with a community of support. Chronicity may vary over time but the organisation endeavours to remain a trusted source of support – a (health care) home. Appointments are made and kept, and when a new staff member is added to a client’s team, they see that person at the same trusted location, usually on the same day as other consultations. This increases motivation among clients and reduces drop-outs or so-called did not attends. First Step has no geographical or other eligibility criteria for most of its services.

First Step was recently awarded its first ever funding from the Victorian Department of Health for a 12-month Integrated Care Pilot.

The key lesson from First Step is that for many of their clients, the key to recovery will be a long term and sustained engagement across the six key domains. The federal government consultation paper on their new adult mental health hubs indicates the services they will offer will be short term or medium term. Excluding the most vulnerable in this way appears a wasted opportunity when gathering a multidisciplinary team at considerable expense.

With the term “missing middle” so loosely defined, federal and state planning for new community mental health centres can proceed with the potential for intergovernmental duplication, waste and, most importantly, ineffective care. If this supposedly subacute group is not in governments’ definitions of missing middle, then, who will be adequately resourced to care for them, because current systems are manifestly inadequate? What can we learn from the First Step example to answer that question?

A genuine response to the complex terrain of the missing middle merits clearer definition of expected clients and their ongoing needs with a recognition that for many, the aim is to facilitate incremental, whole of life improvements. Building the services that can respond to this challenge requires workforce, funding, payment, and smart service design. These need to be supported and then scaled up, so they can be available in the communities where they are most needed.

Recent budgets have confirmed governments’ understanding of the need for a systemic overhaul in mental health. But in our excitement to launch innovative solutions we must look to the examples, however rare, that have already been tested by the years and are saving lives. At every stage of reform we must adhere to first principles, and develop solutions that are based on true understandings of the problems they are trying to fix.

Dr Sebastian Rosenberg is a Senior Lecturer at the Brain and Mind Centre, University of Sydney.

Patrick Lawrence is the CEO of First Step.

Professor Ian Hickie is Co-Director of the Brain and Mind Centre, University of Sydney.

4 thoughts on “Who are the “missing middle” of mental health care?”