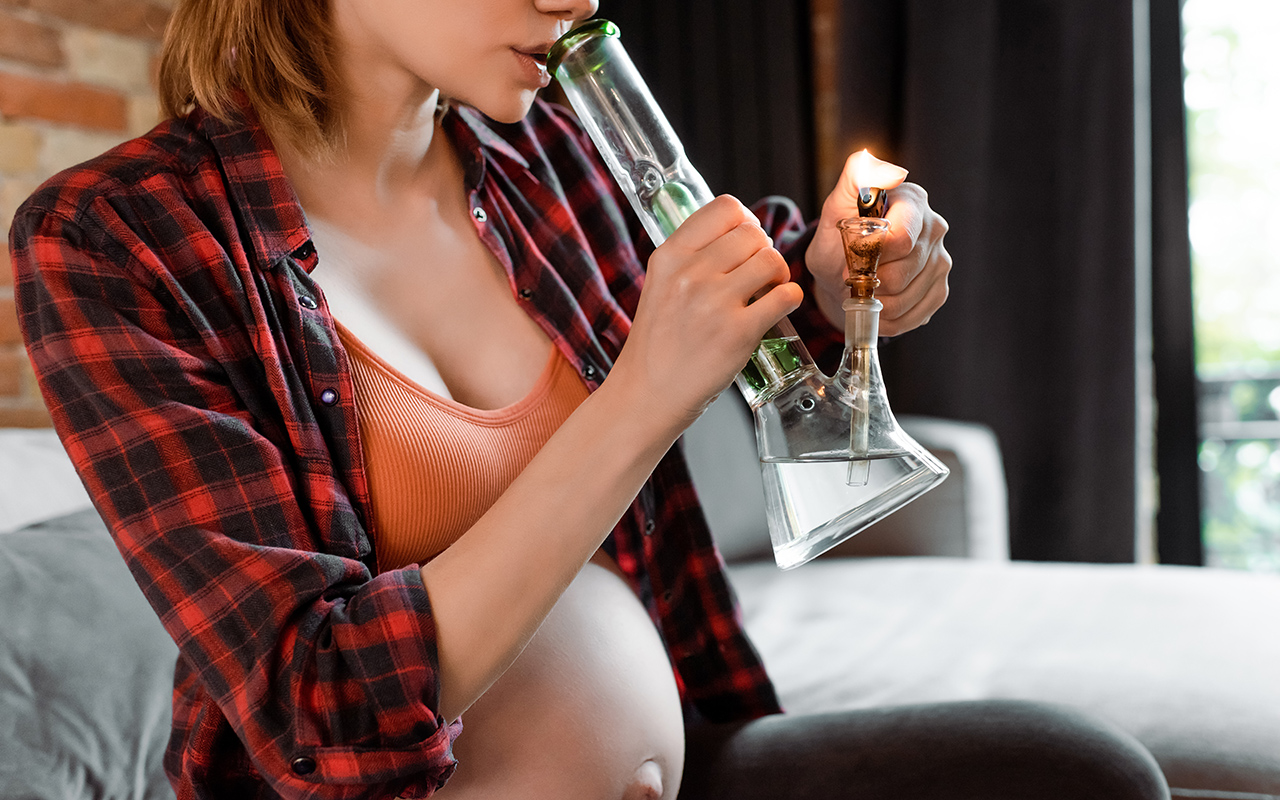 Continuing to use cannabis during pregnancy is an independent risk factor for poorer neonatal outcomes, according to the authors of research published by the MJA. A team of researchers from Australia, the UK, Ireland and New Zealand analysed data from 5610 pregnant nulliparous women with low risk pregnancies, recruited for the Screening for Pregnancy Endpoints (SCOPE) study, November 2004 – February 2011. At 14–16 weeks of pregnancy, women were grouped by self-reported cannabis use. They found that 314 women (5.6%) reported using cannabis in the 3 months before pregnancy or during their pregnancy, 97 (31%) stopped using it before and 157 (50%) during the first 15 weeks of pregnancy, while 60 (19%) were still using cannabis at 15 weeks. Compared with babies of mothers who had never used cannabis, infants of those who still used it at 15 weeks had lower mean values for birthweight, head circumference, birth length, and gestational age at birth. The differences for all outcomes, except gestational age, were greater for women who used cannabis more than once a week than for those who used it less frequently. Co-author Dr Luke Grzeskowiak, speaking in an exclusive MJA podcast, said one positive finding was that in women who had reported use only prior to conception or who had stopped cannabis in the first trimester, there was no evidence of harm. “That’s an important message to highlight – we want to encourage or reassure women who have used cannabis accidentally without knowing that they’re pregnant,” said Dr Grzeskowiak, a Conjoint Research Fellow at the Robinson Research Institute at the University of Adelaide and the South Australian Health and Medical Research Institute. “There needs to be further research around the fundamental mechanisms at work. Is there, for example, one particular way in which cannabis is used that is more harmful than another. Which component of cannabis is more harmful? We want women and health care professionals to be better informed about the potential harms of cannabis use during pregnancy. It’s important that we don’t stigmatise women who’ve used cannabis because that’s not going to be conducive to providing good antenatal care. Cannabis use should be seen as another risk factor along with other substance use issues, including cigarette smoking and alcohol. Opening up conversations in a non-judgmental manner is going to help facilitate discussions around cannabis use and provide the opportunity to understand an individual’s perceptions surrounding use.”

The case of a man whose advance care plan (ACP) directed health care providers to cease giving him food and water, even if he appeared to willingly accept them, has highlighted the challenges and benefits of end-of-life planning. An article published in the MJA described the case of a 71-year-old man who had a massive stroke immediately on disembarkation from a long flight. Following thrombolysis, he was haemodynamically unstable, severely globally dysphasic and was unable to feed himself. Five years before his stroke, he completed an ACP that stated that in the event of impairment rendering him “incapable of rational existence”, he would not want to be kept alive via artificial means but rather be allowed to die free of pain and distress. Three months before his stroke he updated his ACP with an advance care directive (ACD) stating that if he was “unable to make informed decisions about my health care, and I am unable to feed myself, continuing life would have no value for me”. In that situation, he directed that all life-prolonging therapies should be withdrawn, including “the provision of nutrition and hydration whether provided artificially or medically or by hand or by assisted feeding”. It included the directive that “if I am suffering from advanced dementia and appear willing to accept food and fluid by hand offered by assisted or hand feeding, my instructions are that I do NOT want to be fed by hand even if I appear to cooperate in being fed by opening my mouth”. Associate Professor Brian Le, director of the Parkville Integrated Palliative Care Service at Royal Melbourne Hospital, said in an exclusive MJA podcast, that the specificity of the man’s ACD was a first in his experience. “It raised a number of questions about the patient’s autonomy versus our usual care and what we would usually provide to any patient who has a severe illness. Actually foregoing the provision of oral food and fluids – is that something that we do in hospitals? If a patient seemingly is wanting to eat, if they lack capacity, are they deciding that they want to eat? Or is it really a reflexive thing that’s happening? And to what extent is this a medical treatment that someone can refuse? These are all the questions that came up.” After further observation of the patient, assessment of his capacity and discussions with his wife, other doctors and hospital legal staff, the decision was made to respect the patient’s ACD. Anticoagulation, food and fluid were discontinued. The patient died 4 days later. “We decided that he couldn’t have been any clearer [about] what he wanted to happen and what he would find unacceptable. At the end of the day, that guided our decisions to how we looked after him,” said Associate Professor Le. A national approach to ACPs and ACDs and their enforceability, rather than the current variation across states, would be helpful for caregivers and health professionals, he said.