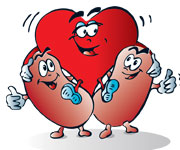 AN alliance of influential health groups is working on a proposal for the federal government to fund an annual primary health care check for adults that would include testing for kidney disease.

The National Vascular Disease Prevention Alliance is proposing a structured health check by GPs of people over 45 years of age that would include testing for diabetes and cardiovascular and kidney disease.

The meeting coincides with an editorial on World Kidney Day 2011 published in the latest MJA. (1)

Written on behalf of the Joint International Society of Nephrology and International Federation of Kidney Foundations World Kidney Day 2011 Steering Committee, the editorial says early detection and prevention of kidney disease could reduce both kidney and cardiovascular disease. The editorial is being published concurrently in many medical journals around the world to coincide with World Kidney Day on 10 March.

The authors said there was compelling evidence for selective screening for chronic kidney disease (CKD) but implementation would only be achieved when health authorities could be convinced it was in the public interest.

Dr Timothy Mathew, national medical director of Kidney Health Australia, said current health checks funded by Medicare were one at age 45 years and one at age 75 years or older.

“We don’t think they capture the high-risk population appropriately,” Dr Mathew said. “For a start, they don’t specify what has to be done in the health check and this can just be a conversation or it can be 10 [tests], so we need to have a more structured health check.”

He said the current checks were usually opportunistic when a patient attended their doctor. Some practices did have recall systems in place to remind patients to have a check.

Discussions on the proposed health checks were held with the Federal Health Department last week but it was still “a work in progress”, Dr Mathew said. It was hoped such a health check could be introduced within a year.

“This is especially true when an increase in proteinuria, a major target of any CKD screening program, is present,” the authors said.

Multiple studies confirmed that proteinuria was a graded risk factor for cardiovascular disease independent of glomerular filtration rate (GFR), hypertension and diabetes, and that this risk extended down into ranges of albumin excretion generally considered “normal”.

Kidney disease was not rare and about 10% of the population had evidence of renal dysfunction.

“And we know these individuals are not of concern just because a few will progress to [end-stage renal disease], but more because they carry a greatly enhanced risk of premature death from [cardiovascular disease], the single largest and most expensive health care threat we confront at a global level,” the authors said.

The good news was that biomarkers of CKD (proteinuria and estimated GFR) were easy and relatively inexpensive to detect or estimate, and proteinuria emerged early in the evolution of generalised vascular disease.

Dr Mathew said if the annual health check was approved, the kidney test would be a blood test to measure creatinine and determine the GFR, plus a urine test for microalbuminuria.

If kidney disease was detected, treatment involved an ACE (angiotensin-converting enzyme) inhibitor or angiotensin-receptor blocker for either proteinuria or high blood pressure, he said.