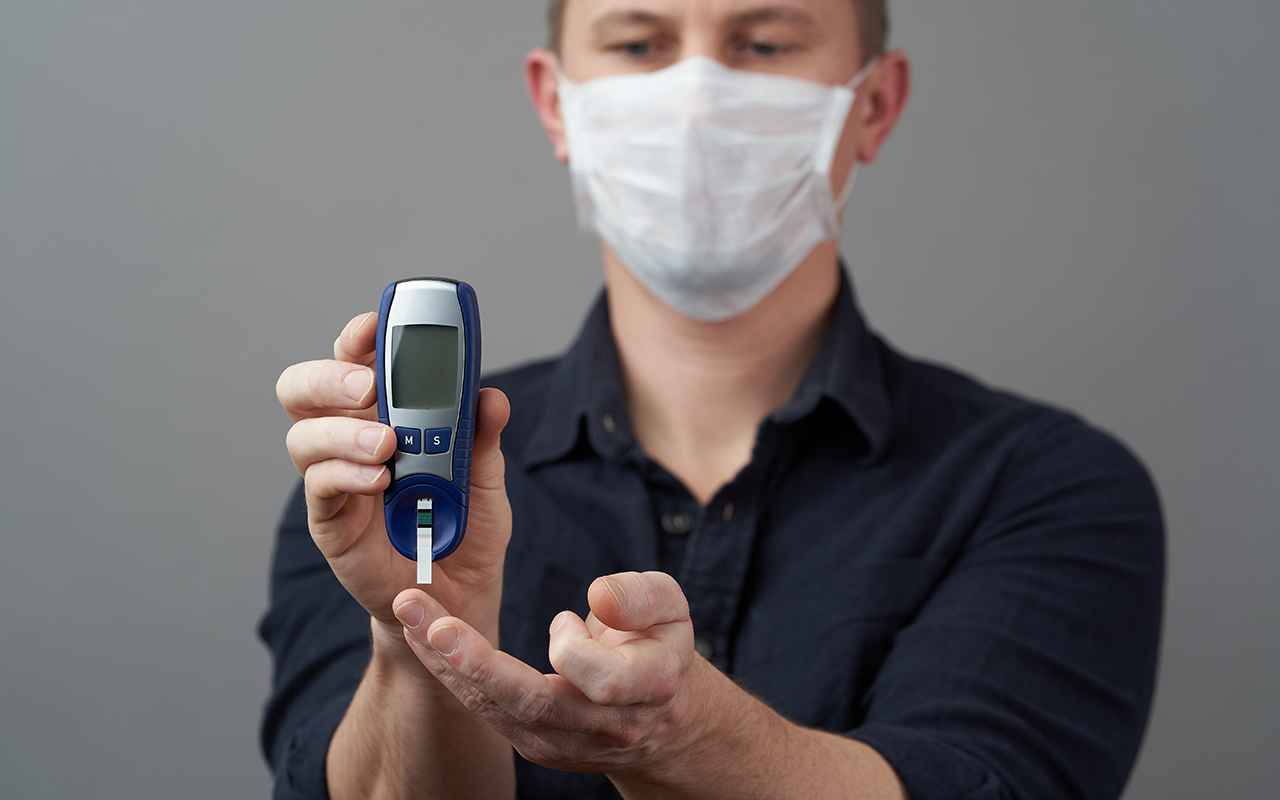 Severe diabetes may increase risk of death from COVID-19

A new systematic review and meta-analysis, published in Diabetologia, shows that patients with a more advanced course of diabetes have a higher risk of death when infected with SARS-CoV-2. The German analysis includes 22 studies and 17 687 people. This is the first edition of a “living” systematic review and meta-analysis on observational studies investigating phenotypes in individuals with diabetes and COVID-19-related death and severity, which the authors will update periodically as new studies on diabetes and COVID-19 are published. The review found that associations with COVID-19-related death in people with diabetes were similar to those found in the general population without diabetes. Men with diabetes were 28% more likely to die of COVID-19 than women with diabetes, and people aged over 65 years with diabetes were more than three times more likely to die than those under that age with diabetes. With each 5-year increase in age, the relative risk for COVID-19-related death in people living with diabetes increased by 43%. Only few of the 22 studies investigated diabetes-specific factors related to COVID-19, and the authors called for more studies into these factors to improve the strength of the evidence. The strongest associations were observed for blood glucose levels > 11 mmol/L at admission and death, with an 8.6 times increased risk of death compared with < 6 mmol/L, with the strength of evidence deemed moderate as it came from just two of the 22 studies. Patients using insulin to control their diabetes were found (from five studies) to be 75% more likely to die of COVID-19 than non-insulin users. Use of insulin usually indicates a more advanced course of diabetes. Conversely, people treating their diabetes with metformin were 50% less likely to die of COVID-19 than those not using metformin (from four studies). As with the general population without diabetes, pre-existing conditions were found to increase the risk of COVID-19-related death in those with diabetes. Cardiovascular disease (by 56%, eight studies), chronic kidney disease (by 93%, six studies) and chronic obstructive pulmonary disease (by 40%, five studies) all increased risk of COVID-19-related death in people living with diabetes.

Desk location at work may affect sense of focus

Open-plan office workers with more visual control over their environment rated their focus, productivity, and teamwork more highly, according to a UK study published in PLOS One. In the northern spring of 2018, the researchers studied four floors of the London headquarters of a large international technology company. They collected a staff survey on satisfaction with workspaces and meeting rooms, along with specific information on the office seating positions of all participants and a marked floor plan. The authors received 172 responses to their survey (a 16% response rate). Staff with higher numbers of desks in their field of vision were less likely to rate their workplace environment favourably, possibly due to distractions and difficulty talking to coworkers without disturbing others. Staff whose desks faced away from the main area of the room with many coworkers out of sight behind them also rated the environment less favourably, potentially due to a lack of control over their environment. The authors also found both these sets of workers tended to negatively rate aspects of teamwork like sharing information with others, team identity, and cohesion. In contrast, workers who faced the room and had relatively few desks in their line of sight rated themselves more focused and productive and their teams as better bonded. Workers at window desks felt more productive and focused than those sitting beside walls. In other words, staff with more visual control over their environment were up to 40 times more likely to rate productivity, focus, teamwork, and team bonding favourably. Since this study’s insights have only been derived from a single case, repeat studies are necessary to see whether these results are generalisable.

How stress can stop immune cells in their tracks

Researchers from the Peter Doherty Institute for Infection and Immunity have discovered that signals produced by nerves in response to stress can stop immune cells from effectively fighting pathogens or tumours. Published in Immunity, the researchers used an advanced imaging technique known as intravital microscopy to look at how stress affects cells of the immune system of mice in real time. Intravital microscopy uses a special technique to image cells of a live animal in real time. The intravital microscopy technique which allowed the researchers to watch this phenomenon is very difficult to do in people as it requires body tissue. “We know anecdotally that when we are stressed, we are more likely to get sick, but exactly why this occurs has been difficult to define, until now. The imaging showed us that stress caused immune cells to stop moving, preventing them from protecting against disease,” the researchers reported. “Movement is central to how immune cells can get to the right parts of the body to mount an immune response against infections or tumours, so it was surprising to see that the stress signals had such a rapid and dramatic effect on how immune cells move around. We also showed that it was different types of immune cells that were affected, and that it can occur in many different parts of the body.” Knowing how stress can impair immune responses may provide new avenues to overcome the negative effects of stress on immunity. “For instance, cancer patients face increased stress that can contribute to a decreased ability of the body to fight the disease, and we might be able to use our findings to improve immune responses to those patients.”

Psychedelic drugs have shown promise for treating neuropsychiatric disorders such as depression and post-traumatic stress disorder. However, due to their hallucinatory side effects, some researchers are trying to identify drugs that could offer the benefits of psychedelics without causing hallucinations. In Cell, researchers report they have identified one such drug through the development of a genetically encoded fluorescent sensor – called psychLight – that can screen for hallucinogenic potential by indicating when a compound activates the serotonin 2A receptor. The investigators used psychLight to identify a compound called AAZ-A-154, a previously unstudied molecule that has the potential to act on beneficial pathways in the brain without hallucinogenic effects. “One of the problems with psychedelic therapies is that they require close guidance and supervision from a medical team,” they reported. “A drug that doesn’t cause hallucinations could be taken at home.” The serotonin 2A receptor, also known as 5-HT2AR, belongs to a class of receptors called G protein-coupled receptors (GPCRs). “Serotonin reuptake inhibitors have long been used for treating depression, but we don’t know much about their mechanism. It’s like a black box. This sensor allows us to image serotonin dynamics in real time when animals learn or are stressed and visualise the interaction between the compound of interest and the receptor in real time.”