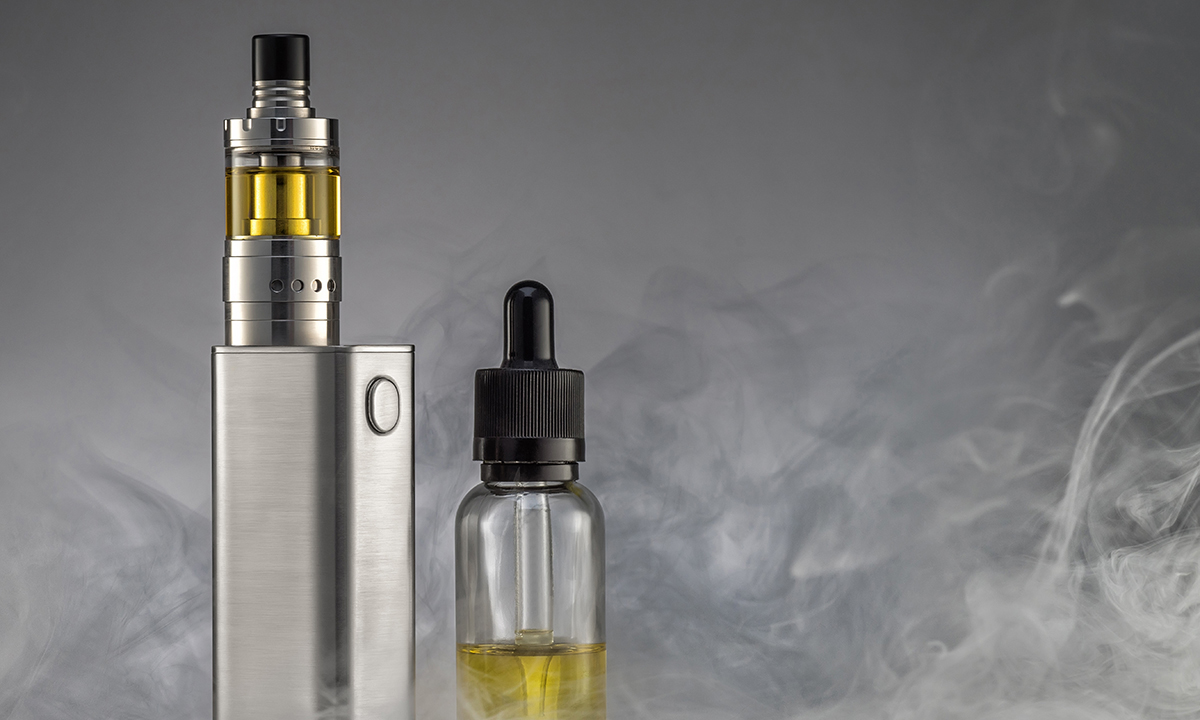 Published online by the MJA, the research, led by Carol Wylie, manager of the Queensland Poisons Information Centre (PIC), shows that the number of calls to PICs about vaping liquids rose dramatically between 2009 and 2016, particularly after 2013. 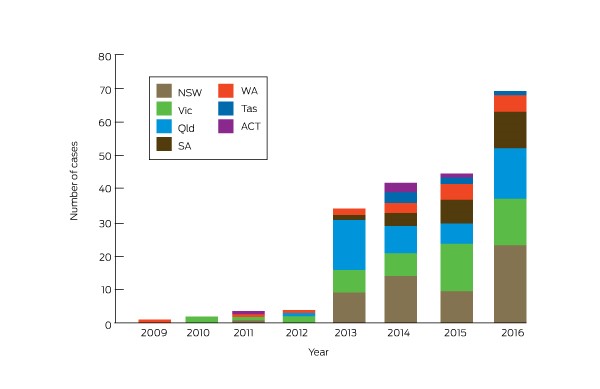 Numbers of cases related to e-cigarette exposure reported to Australian Poisons Information Centres, by calendar year and state. No calls were received about cases in the Northern Territory.

“Of 202 sequential e-cigarette-related cases, 38% were from relatives of children worried about their exposure to the liquid component of an e-cigarette after children were found with uncapped vials, sucking the mouthpiece, drinking from separated liquid containers, inhaling the liquid, eating the cartridge, or having splashed liquid in their eyes,” Wylie and colleagues wrote.

“Adults and adolescents were the subjects of calls in 126 cases (62%), including calls about the potential side effects of routine use or accidental ingestion, or about skin or eye splash exposures. Twelve calls followed deliberate administration for self-harm, ten by oral ingestion and two by injection.”

Speaking in an exclusive podcast, Ms Wylie told InSight+ that the biggest problem facing PIC staff was the inability to verify nicotine dosages.

“[When someone calls a PIC seeking advice] we need to find out as much as we can about the product involved,” she said.

“That would include things like brand names, ingredients, strengths of the product. And this is particularly relevant for electronic cigarettes, because a lot of [the liquids] are imported, and we are often unable to get the exact strength of the product.

“That makes our work really difficult, because we rely on that information to do a risk assessment.”

Regulation, of course, means legalisation, a fraught question for Australian regulators. But recent research shows that e-cigarette liquids are in dire need of labelling, storage and safety guidelines.

A study by Chivers and colleagues found that nicotine was detected in six out of 10 supposedly “nicotine-free” e-liquids.

“The levels in three (1.3, 1.4, 2.9 mg/mL) were comparable with those of commonly available low dose nicotine e‐liquids,” the authors wrote. “The fact that nicotine was present has important implications for addiction and health, and reflects its use in the e‐cigarette liquid manufacturing process.”

Also found in all 10 of the test e-liquids was 2‐chlorophenol, classified as “acutely toxic by the Globally Harmonized System of Classification and Labelling of Chemicals”.

“It is a real challenge for regulators,” Ms Wylie told InSight+.

“The fact that these products are mostly imported means that the regulations that we have for other scheduled products and other pharmaceutical products are not in place.

“For the majority of calls that we get to the poison centres about regulated products and pharmaceuticals, we have a significant degree of confidence in the strength that’s provided on the label, and that means we can conduct our risk assessment without too much concern.

“Other recent literature suggests that the amount reported on the bottle is not the same as what’s been found in there.

“We had [a call about] one product that was as strong as 200 mg of nicotine per mL,” she said. “You would not need very much in a 10 kg infant to be a problem. A mL would be enough to cause toxicity.

“So, it’s the access that concerns us, the strength of the products, and the fact that we cannot be confident in the concentration of the nicotine in these products. Because they’re coming from overseas, we don’t have confidence in those strengths.”

Early symptoms of nicotine poisoning include vomiting and nausea, according to Wylie and colleagues.

“Sometimes palpitations, increased heart rate; some people get hypersalivation, and seizures have been reported. These are early symptoms, what we would call stimulatory symptoms,” Ms Wylie said.

“In the more severe cases, if people go on to get other symptoms, they tend to be described as depressant symptoms, such as sedation, respiratory depression, hypotension, and bradycardia, which obviously can be quite dangerous.”

“In poisonings, not everybody rings a poison centre, which would suggest that we are under-reporting, because there will be cases that we never hear about.

“The other thing that’s interesting about electronic cigarettes, of course, is because they’re not legal in Australia, there may be some reluctance in some people to ring us, if they’re worried about any legal repercussions.

“If the products were legislated to use legally, we could increase the legislation on safety and labelling.

“And the challenge, of course, is if [nicotine vaping was legal] would we get more poisonings?”

In the absence of that legislation, Ms Wylie believes GPs have a role to play in increasing the safety of e-liquid use among their patients.

“If GPs know they have a patient using electronic cigarettes, particularly if they had young children in their family, they could remind them by saying, ‘make sure you’re keeping these safe and away’,” she says.

“Most parents are quite good at maintaining safe environments. But it’s just a reminder for them, obviously, if anyone has an exposure to ring the Poison Centre straight away. Or if they have serious symptoms, to get them seen immediately, by calling the ambulance.”

13 thoughts on “Legalising nicotine vaping: could it reduce poison harms?”