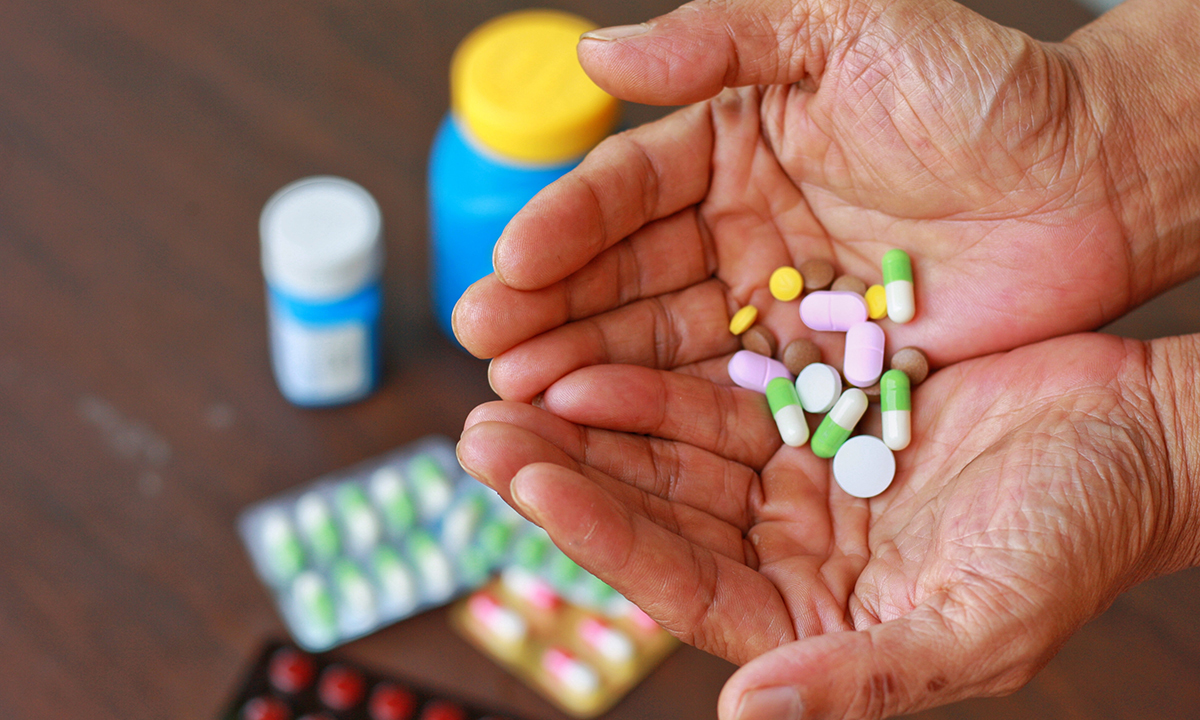 POLYPHARMACY is a “a red flag” for clinicians on the lookout for medication-related harms in their older patients, say experts.

Almost 1 million older Australians regularly take five or more prescription medicines, according to research, published in the MJA, that highlights the need to implement a proposed National Strategic Action Plan to address polypharmacy.

Professor Sarah Hilmer, Conjoint Professor of Geriatric Pharmacology at the University of Sydney, said the findings underlined the importance of continued action on inappropriate medication use.

“But it doesn’t necessarily mean that every single person who takes five or more drugs is getting inappropriate therapy.”

The researchers reported that, in 2017, more than one-third of older Australians (935 240 people) were affected by continuous polypharmacy, defined as having five or more unique medicines dispensed during both April–June and October–December.

After analysing a random 10% sample of Pharmaceutical Benefits Scheme (PBS) data for people aged 70 and older, the researchers found that continuous polypharmacy increased from 33.2% in 2006 to 36.2% in 2017 (up by 9%). And, despite a small reduction since 2014, the number of older people affected by polypharmacy jumped by 52% in the 11-year period, reflecting Australia’s ageing population.

The researchers said PBS policy changes – such as the delisting of low cost medicines such as paracetamol and aspirin – were more likely to be responsible for the slight decline in dispensing than changes in actual medicine use.

“Polypharmacy can be appropriate, but there is substantial evidence for its potential harm and the importance of rationalising unnecessary medicines, particularly in older people,” they wrote.

Lead author Dr Amy Page, Adjunct Senior Lecturer at the University of Western Australia’s Centre for Optimisation of Medication and an Adjunct Research Fellow at Monash University’s Centre for Medicine Use and Safety, said the estimated prevalence of polypharmacy was conservative because the study captured only PBS-listed prescriptions. Private prescriptions, over-the-counter medications and complementary medicines were not included in the findings.

“We chose a conservative measure of polypharmacy to ascertain a lower estimate,” Dr Page told InSight+. “We also looked at polypharmacy in two different quarters to make sure that it was continuous, and it wasn’t just a once-off medicine, like an antibiotic, that we were capturing.”

Dr Page, who is also Lead Pharmacist at Alfred Health, said, to date, estimates of the extent of polypharmacy had focused on high risk populations, such as those who were hospitalised or in residential aged care.

“We haven’t had that snapshot of how many people over 70 are affected by polypharmacy,” Dr Page said. “And we needed that estimate to be able to evaluate if any of these programs and strategies to increase the awareness of deprescribing were making an impact. This gives us a baseline that will allow us to evaluate future public health initiatives.”

Professor Hilmer led the development of recommendations for a National Strategic Action Plan to Reduce Inappropriate Polypharmacy, which was released in December 2018.

The Plan – which aims to reduce harmful or unnecessary medicines use by older Australians by 50% over 5 years – comprises seven action items.

“These range from policy interventions – like explicitly [addressing] polypharmacy and multimorbidity in the National Medicines Policy, including subheadings on how to stop medicines in [product] information and consumer medicines information – through to trying to integrate the fairly fragmented system that we have for pharmaceutical care, so different sectors of the health care system know what medicines people are taking and why,” Professor Hilmer said.

She said the plan also recommended providing incentives to health professionals for optimising quality use of medicine.

“For example, Medicare item numbers to give GPs time to review people’s medicines as part of their routine consultations,” Professor Hilmer said, adding that plan was being disseminated to key stakeholders and groups responsible for quality use of medicines and guidelines.

“We are working on each of the items [in the Action Plan],” she said. “We need a multipronged approach to be able to make inroads into what is a really wicked problem.”

Professor Hilmer said clinicians often cited patient resistance as a barrier to deprescribing, but this was often not the case. She said Dr Emily Reeve, while at the University of Sydney (now at the University of South Australia), had developed a revised  Patients’ Attitudes Towards Deprescribing questionnaire, which had shown that nine in ten patients would be willing to stop one or more of their medicines if their doctor told them it was safe to do so.

“People do not like to rattle when they walk,” Professor Hilmer said. “It’s really just a matter of explaining to the patient what you are doing, why you are doing it, and that it’s a supported process, that you will be monitoring their progress and seeing if they feel better.”

For clinicians, time was often a barrier to addressing polypharmacy.

“There is wide and increasing recognition about the harms of polypharmacy and a lot of the clinician barriers seem to be around having time to prioritise a medication review within a routine consultation – because it does take a long time,” she said.

Professor Hilmer said that, as part of the National Strategic Action Plan, work was underway to develop tools to better support clinicians in deprescribing for older patients.

“We have been working on guidelines to help clinicians with some of the more common drugs where the harm often outweighs the benefit in old age, and are developing complementary consumer information,” she said.

7 thoughts on “Polypharmacy a “red flag” for older Australians”