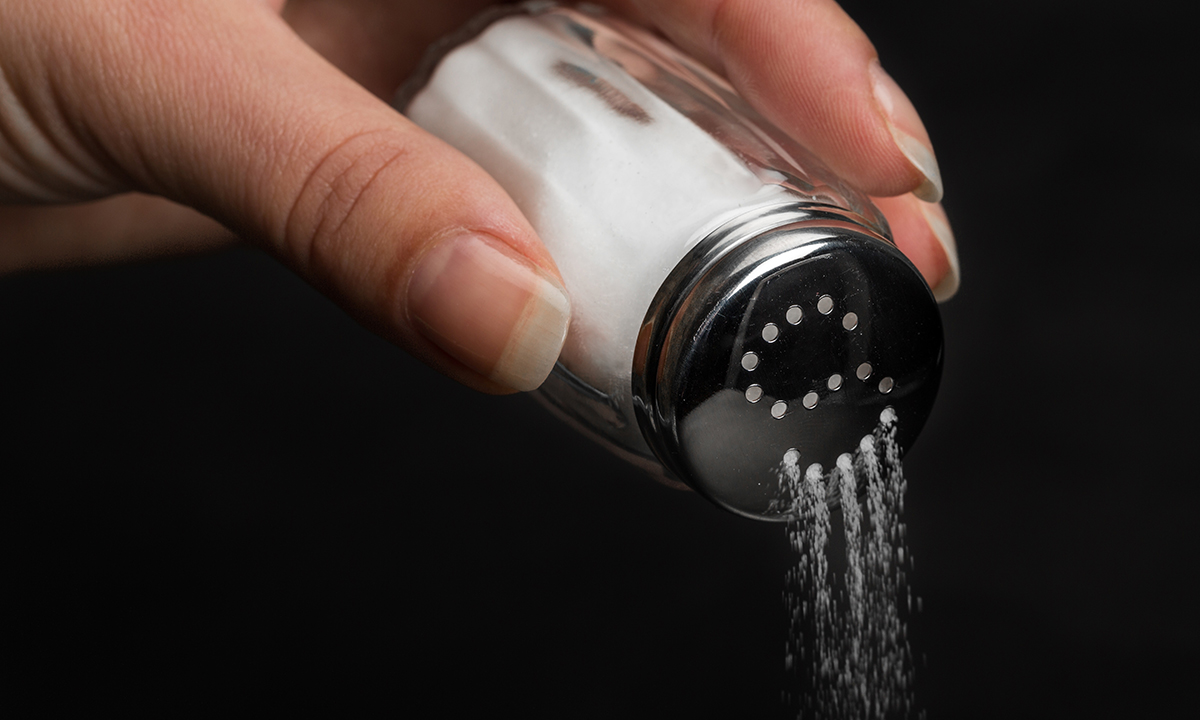 AUSTRALIANS are consuming twice the maximum amount of salt recommended by the World Health Organization (WHO), according to a meta-analysis published in the MJA.

The review of 31 published studies and one unpublished data set evaluated the salt consumption of more than 16 000 individuals between 1989 and 2015. The studies reported salt consumption on the basis of 24-hour urine analyses or dietary questionnaires.

Researchers from the George Institute for Global Health and Deakin University found an average salt consumption based on 24-hour urine collections, after adjusting for non-urinary salt excretion, of 9.6 g per day. They noted that this was almost double WHO’s recommended maximum intake of 5 g per day.

Men were found to have a higher mean weighted consumption than women (10.1 g per day and 7.34 g per day, respectively).

The researchers also reported that, despite the fact that salt reduction had been on the public health agenda for many years, the findings indicated that there had been no reduction in Australians’ salt consumption over the 26-year study period.

Professor Mark Lawrence, Professor of Public Health Nutrition at the Institute for Physical Activity and Nutrition at Deakin University, said that the findings were further evidence of the need for Australia to adopt a national food and nutrition policy.

“We need to have a comprehensive policy and that would cover not just educating people and and changing bits and pieces of the food supply, but critically also looking at advancing a healthy and sustainable food system,” Professor Lawrence told MJA InSight. “Unfortunately, what we are getting is a fragmented response, with short term and stop–start activities.”

Professor Lawrence said that the federal government-initiated Healthy Food Partnership, established in 2015, had the potential to effect change, but its reductionist focus could prove to be counterproductive.

“A concern with the Healthy Food Partnership is that often is focused on nutrients or particular ingredients in food, rather than the food itself. While there is a role for that [approach], in its current form the Partnership isn’t adequately considering whether the source of the problem nutrient is a junk food or a healthy food and we have seen some counterproductive outcomes.”

Professor Lawrence said that his group had recently published research highlighting flaws in Australia’s Health Star Rating system, with more than half of the rated discretionary or “junk” foods (57%) displaying a rating of 2.5 stars or more.

“The Health Star Rating system has strong potential but definitely needs reform. At present, the system is undermining the Australian Dietary Guidelines, which were developed over 5 years using the highest possible levels of evidence to provide recommendations on healthy food selection and dietary patterns to promote health.”

He said that focusing individually on reducing dietary salt, sugar or fat ignored the benefits in promoting a diet including the five food groups, as outlined in the Australian Dietary Guidelines.

“If we had this whole food-based approach and started promoting the five food group foods and discouraging discretionary foods, then most of the dietary imbalances with added sugar, added salt, and saturated fat intake would be taken care of and we’d have added confidence in the diet also being nutritionally adequate overall.”

In an MJA InSight podcast, study co-author Professor Bruce Neal, Deputy Director of the George Institute for Global Health Australia, said that while the cost-effectiveness of salt-reduction campaigns had been the subject of debate, it was his view that the rate of strokes and heart attacks could be greatly reduced for “very little investment”.

He highlighted the experience of the UK, where a spend of about £15 million per year had resulted in a 10–15% reduction in salt consumption (here and here). “Key components included determining and monitoring population salt intake, setting population salt intake targets, reducing the salt content of the food supply by setting progressively lower targets for various food categories, and moving industry to reformulate food products so that they contained less salt,” Professor Neal and his co-authors wrote in the MJA.

“That translates into about £1.5 billion pounds a year in avoided health care costs and about 11 000 less deaths each year in the UK from strokes, heart attacks and the like, so it’s potentially really … cost-effective and it’s a tragedy that Australia and most of the rest of the world isn’t doing more about it.”

Associate Professor Jacqui Webster, Director of the WHO Collaborating Centre for Population Salt Reduction at the George Institute for Global Health, welcomed the comprehensive overview of the current levels of salt intake in Australia.

“There is clearly much work to be done and, as we have seen in these data, there hasn’t been any change in salt intake so far,” Professor Webster told MJA InSight.

“At the George Institute, we’ve been working for 10 years to engage the food industry to reduce salt in foods, and to raise awareness of the need to reduce salt. While we have seen some progress, clearly more needs to be done.”

She said that the George Institute had compiled a database to track salt levels in processed foods, and encouraged consumers to make healthier choices using its FoodSwitch program.

Professor Webster, who is a member of the Healthy Food Partnership’s reformulation working group, said that she was also hopeful that further targets for industry to reduce salt in processed foods would be agreed this year.

She said that a previous salt-reduction program – established under the Food and Health Dialogue, a government program preceding the current Healthy Food Partnership – had seen a reduction in the salt content of breakfast cereals, bread and processed meats.

“Research by the George Institute showed that there had been about a 10% reduction in salt levels in [targeted] foods between 2010 and 2014,” she said. “It demonstrates that setting targets actually does work, but we need to see more of that.”

“Ideally, we would have a government-funded diet and nutrition survey on a representative sample of the population every 5–8 years,” she said, noting that the survey should include 24-hour urine analysis to ensure robust estimates of salt consumption.