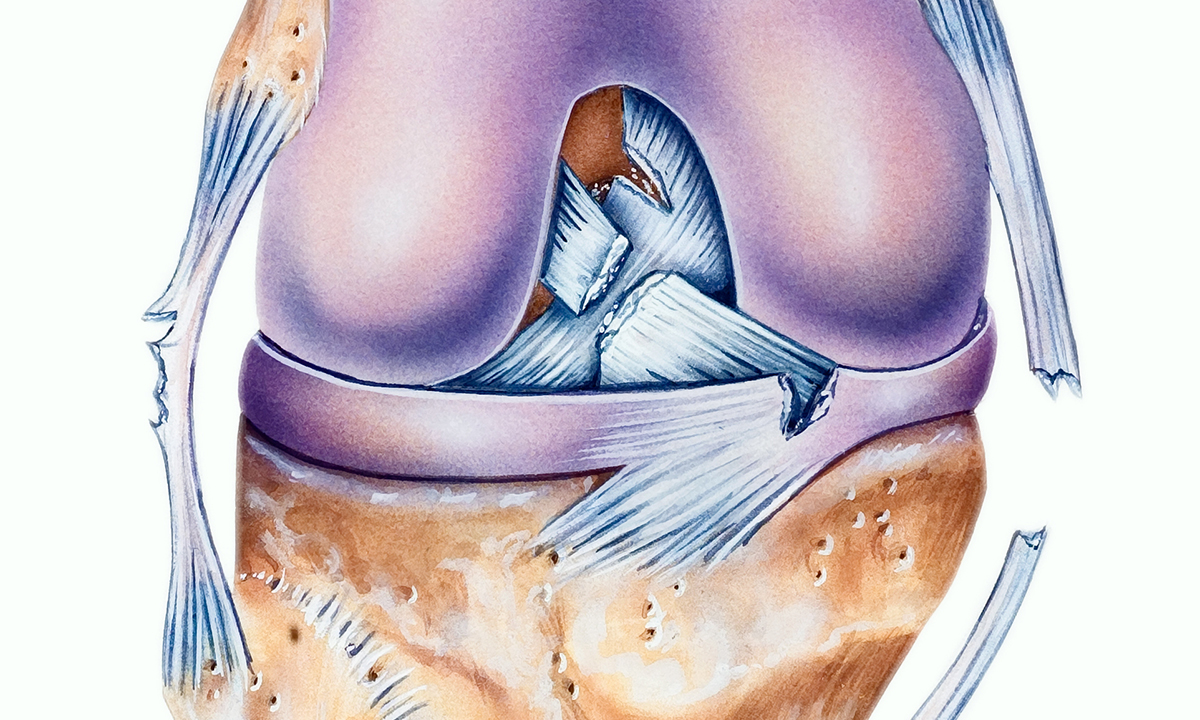 Worrying epidemic of ACL injuries in the young

WHEN Gold Coast knee surgeon Dr Chris Vertullo started practising 15 years ago, major knee injuries in the young were something he rarely saw. But over time, he started to notice a worrying increase in parents bringing their children in with torn anterior cruciate ligaments (ACL) that needed surgery. In his practice, ACL injury presentations in children aged 15 years and younger went up from the odd case every now and then to around two per week in more recent years. And the trend is not just specific to Australia.

“When I’ve been to meetings around the world, it’s been increasingly discussed among colleagues that we were seeing an epidemic of significantly severe knee injuries in young people,” Dr Vertullo says in an exclusive podcast. “The problem is that if you get other injuries, such as a corked thigh for instance, it doesn’t have significant long-term consequences. But if you tear your ACL, and particularly if you also tear your meniscus when you’re 15 years old, you have a very high chance of needing a knee replacement in later years.”

Professor Julian Feller, a Melbourne-based orthopaedic surgeon with a special interest in ACL injuries, describes the study’s findings as “not surprising at all”.

He’s had the same experience as Dr Vertullo, finding a startling increase in the number of young people coming into his surgery with ACL injuries.

“I get parents coming in with their 14-year-old, and they say ‘but this is crazy, how do 14-year-olds tear their ligament?’ Looking back on their own childhood, they don’t remember kids with knee injuries that stopped them playing. It’s a new thing.”

So, what has changed to cause this epidemic of ACL injuries, and why is Australia the world leader?

Professor Feller says the particularly high incidence in Australia may be down to the combination of sports we play, in particular team sports like AFL, netball, touch rugby and soccer that require a lot of pivoting and which put particular pressure on knee ligaments. Additionally, in Australia, people continue to be involved in organised sports once they leave school, while in other countries there is more of a drop-off.

But as for the question of the spectacular increase in injuries in recent years, Professor Feller, who co-authored the International Olympic Committee consensus statement on prevention, diagnosis and management of paediatric ACL injuries, points the finger at our risk-averse culture of child rearing.

“Nowadays, when kids play sport, they do it as a very specific part of the day. At other times, they can be quite sedentary, with lots of screen time. They’re not mucking around kicking a football in the playground as much. We’ve discouraged them from climbing trees or jumping off the garden shed, we’ve made the playground safe so nothing can happen. We’re so worried about kids injuring themselves that we’ve stopped them learning a lot of landing and balancing skills they would have otherwise learned.”

Professor Feller says that another related issue is the increasing average weight of children, which puts added pressure on the knees. And there’s also the way children’s sports have evolved, he says.

“The intensity of sport has gone up a bit. There’s more pressure from parents and others to win, which has led to more training at a higher intensity. But we haven’t prepared our kids to play this kind of sport. Whereas before, sport was just one element of a very active day, now it’s a specific period of a much less active day.”

Professor Feller concedes that the cultural factors in the way children play today are going to be hard to change. But he says that there are preventive training programs that have been shown to lower rates of ACL injuries. He points to Football Federation Victoria’s FIFA 11+ program as one example. The program consists of a specially designed warm-up which includes specific strengthening exercises and drills designed to improve strength in the lower limbs and core, and improve neuromuscular control and awareness throughout a range of motions.

“There are other iterations for netball and other pivoting team sports that have been proven to reduce incidence of primary ACL rupture. But they’re not always being incorporated into training sessions and that’s what’s got to happen and one thing we can certainly change. They need to be part of standard warm-up, two or three times a week. It’s not a learned behaviour that carries over without practice. You need to keep doing it each session.”

Professor Feller says that another area that needs focus is the rising rates of revision surgery. He says a known risk factor is younger age, but other risk factors are unclear.

“The problem here is that we don’t know how to determine when it’s safe to go back to sport after a reconstruction. Graft ruptures tend to happen within 18 months after surgery, so one line of thinking is people should wait a couple of years before returning to sport. But that’s 2 years of not doing pivoting activities, so you wonder whether that’s counterproductive. Understanding when it’s safe is important, and if that means a longer time, then so be it. But we need a lot more research on this.”

9 thoughts on “Worrying epidemic of ACL injuries in the young”