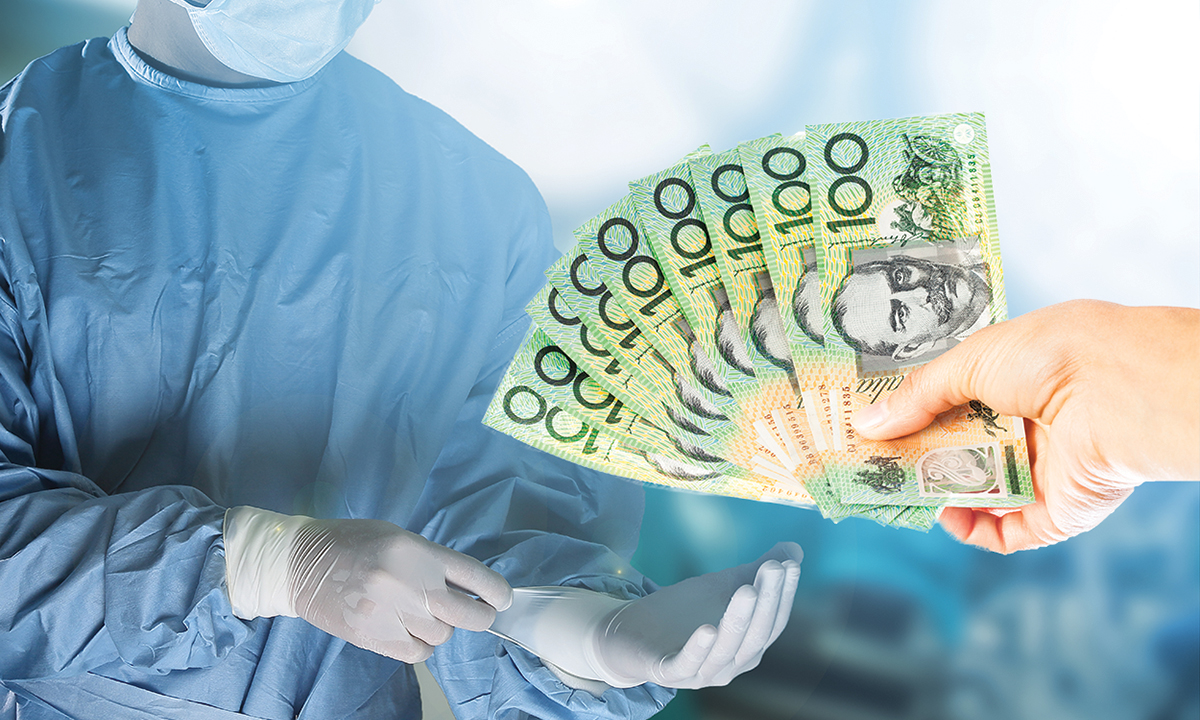 CONSUMER advocates are calling for health system reforms to enable patients to shop around for the best value specialists, as new figures reveal huge variations in out-of-pocket costs.

The amount paid by patients for an initial outpatient consultation varied more than five-fold in some specialties, according to a study of Medicare billing data in the MJA. The difference in average out-of-pocket costs between the least and most expensive practitioners was $100 or more for eight out of 11 specialties – cardiology, endocrinology, gastroenterology, haematology, immunology/allergy, neurology, respiratory medicine and rheumatology, the study found.

The most expensive initial consultations were in immunology/allergy and neurology, with average out-of-pocket costs of $128.70 and $123.70 respectively.

Most specialties bulk billed 30–42% of visits. The lowest bulk-billing rate was in geriatric medicine; however, geriatricians also charged the lowest average fees, with much less fee variation compared with other specialties.

Patients in the ACT paid the highest average fees for five of the 11 specialties.

Study authors Gary Freed and Amy Allen from the University of Melbourne said that the wide variation in fees could not be justified by the quality of care provided.

“Without data on quality of care in private outpatient services, the rationale for the marked variations in fees within specialties is unknown,” they wrote.

They called for greater transparency in specialists’ fees, and also suggested that Australia was lagging behind other nations in developing programs for assessing the quality of outpatient care and making that information publicly available.

Furthermore, they said that the federal government should consider overturning legislation enacted in 1983 prohibiting health insurers from covering outpatient visits.

“It appears that the goal of this policy – to limit outpatient fees – has met with limited success at best,” they wrote.

The MJA research comes on the back of a series of reports showing extraordinary variation in the cost of surgical procedures. Hip replacements, for instance, ranged in total cost from $18 309 to $61 699, including the sum of hospital, surgeon and other providers’ fees, the prosthesis and pharmaceuticals.

Patients’ out-of-pocket costs for hip replacements ranged from nothing to $4057. The price of the prostheses themselves also ranged enormously, from $4908 to $16 178.

The figures come from the 2014 Surgical Variance Report for Orthopaedic Procedures by the Royal Australasian College of Surgeons (RACS) and Medibank, which has also published reports on general surgery, otolaryngology, urology and vascular surgery.

In a Perspective in the MJA, prominent orthopaedic surgeons Professor David Watters and Dr Lawrence Malisano, together with Medibank, noted that there was “no correlation between the size of the fee charged and the quality of the surgery”.

They cited an unpublished analysis by the Royal Australasian College of Surgeons and Medibank showing surgical fees charged were not correlated with length of hospital stay, which they said was a reasonable surrogate for quality.

Consumer Health Forum (CHF) CEO Leanne Wells told MJA InSight that the latest figures revealed a system urgently in need of repair, with patients facing a “random maze of costs for which there is no transparent explanation or justification”.

“Given the degree to which the cost of medical specialists’ services are paid for by the taxpayer through Medicare and private citizens through out-of-pocket expenses, we would argue that their fees and performance measures should be easily accessible to the community at large,” she said. “The establishment of an authoritative and independent website containing this information would be an appropriate platform.

“This transparency system should be accompanied by a new approach to specialist referrals, whereby the referring GP can still recommend a particular specialist, but the referral process should make it clear that patients have the option to go to another specialist of their choice,” she said. “Specialists who do not wish to participate in this transparent approach should not be eligible for Medicare or subsidised health insurance payments.”

Ms Wells added that some specialties may also need to increase the number of training places, to improve access and reduce costs.

“The possible consequence of spikes in unnecessary surgery could be countered by transparency that shines a light on individual practices and outcomes,” she said.

Royal Australian College of General Practitioners President Dr Bastian Seidel condemned excessive specialist fees and supported the call for greater fee transparency; however, he rejected measures such as ratings websites which he said “turn doctors into a commodity”.

He also resisted the proposal to reform the referral system to give patients greater choice, telling MJA InSight: “It gives the illusion of patient choice, but really it leads to fragmentation of care, poor communication, potentially worse clinical outcomes and potentially more costs to the taxpayer as, for example, imaging and pathology tests end up being repeated”.

Specialists who charged above the Australian Medical Association’s (AMA) recommended fees should be transparent about this to their patients, he said.

“In my own practice, I’m often having uncomfortable conversations with patients about the costs of surgery,” he said. “I’m not a specialist broker. Unfortunately, this is becoming more and more problematic with patients saying that they can’t afford to see private specialists and so are having to endure long waits in the public system.”

A study during 2013–14 found that 7.9% of people who needed to see a specialist or consultant physician delayed the appointment or did not go at all because of the expense.

Out-of-pocket costs account for 20% of expenditure on health care in Australia, compared with only 10% of health spending in the UK, 13% in New Zealand and 14% in Canada.

“I don’t think we have a massive problem of excessive specialist fees in Australia,” he said. “A minority of patients face bill shock and a minority of doctors charge well above the AMA fee, which is unacceptable.”

Dr Gannon singled out medically-indicated cosmetic surgery and robotic prostate surgery as areas where patients often reported “bill shock”, but said that in general, specialists were transparent about their fees.

“Most patients pay no gaps for in-hospital services (86%),” he said. “A further 7% are charged a gap they agree to in advance with their health insurer.”

“It’s important doctors maintain the right to set their fees,” he said. “If they don’t, that’s a key component of the US-style medical care, where insurers own every decision in the health care provided and determine the level of care patients get. It takes away one of the key positive components of our system, which is choice.”

Dr Gannon argued that there was no need to reform the referral system to improve patient choice, as specialists could already accept referrals not addressed to them – a fact the CHF said was not as widely known as it should be.

Responding to the push to publish individual specialists’ performance data, Dr Gannon warned it could lead to discriminatory patient selection.

“If, for example, we were to start publishing reports on rates of wound infection or venous thromboembolism after surgery, you would very likely see surgeons refusing to provide care to obese patients,” he said.

“The other problem with performance data,” he said, “is that you’re often comparing apples, with oranges, with pears.”

18 thoughts on “Fees: let patients shop around for value”