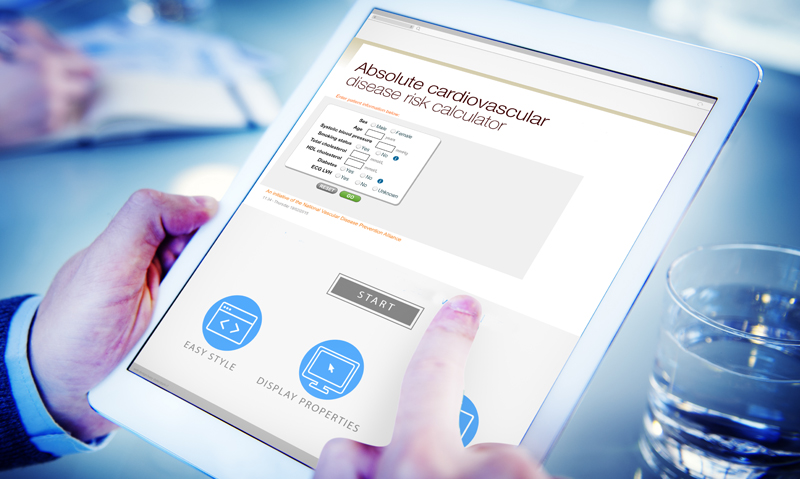 EXPERTS still support the use of absolute cardiovascular disease risk calculators in practice, despite evidence that they overestimate the likelihood of vascular events and concerns they may lead to overtreatment.

A fifth calculator — the Reynolds Risk Score, which included family history and high-sensitivity C-reactive protein — was found to be better calibrated, but it underestimated risk in women by 21%.

Concerns had previously been raised about the applicability of the Framingham equations outside of white populations. However, the new AHA-ACC-ASCVD score, which was derived from multiethnic cohorts to overcome this problem, did not perform any better in the current study.

For instance, in men and women predicted to have 10-year risk scores between 7.5% and 10% by the AHA-ACC-ASCVD score, the actual observed risks were only 3% and 5.1%, respectively.

The study found medication use and interim revascularisations were “not robust explanations of the overestimation”. Nor could the results be entirely explained by the changing significance of risk factors between older and modern cohorts, study participation bias or incomplete capture of cardiovascular events, the authors said.

They raised concerns that overestimation leading to overtreatment which “could result in more health care dollars spent, less health gain, and exposure to drug side effects”.

An accompanying editorial by the developers of the Reynolds score noted that, reassuringly, all five models correctly rank-ordered the higher- and low-risk participants. (2)

However, the study authors said that overestimation was a problem across the continuum of risk for these tools, “including the intermediate risk groups in which treatment decisions balancing therapeutic risk and benefit are more challenging”.

The editorial suggested three ways in which clinicians might respond to the limitations of the calculators: recalibrating the algorithm, simultaneously calculating multiple risk algorithms, or electing to “ignore the problem and accept that more persons will be treated with a class of drugs proven to reduce vascular event rates”.

In support of the third option, it argued “systematic overestimation of risk may be less concerning for statin use because meta-analyses indicate that statins achieve risk reduction even among patients at low levels of absolute risk and the benefits of vascular event reduction seem to exceed the [small increase in] risk of diabetes [from statins]”.

Associate Professor Scott Kinlay, an Australian cardiologist based at the US Department of Veterans Affairs Boston Healthcare System and associate professor in medicine at Harvard Medical School, agreed that the risks of overestimation and resultant overtreatment with statins were likely to be less important, particularly in populations with a high prevalence of disease.

“There is a very small risk of rare and mostly reversible myopathies with statins, but this is arguably less important than if you undertreat high-risk patients and end up with more heart disease”, he told MJA InSight.

Professor Kinlay stressed that the findings of the latest US study could not always be extrapolated to other populations, adding that underestimation, rather than overestimation, may be the problem in other settings.

He urged doctors to choose a well publicised risk calculator that was easy to apply, and to interpret the results in light of the background prevalence of cardiovascular disease in their region.

“Risk calculators are an imperfect but pragmatic tool for clinical practice, particularly when it comes to making decisions about the patient whose risk is unclear”, he said.

Professor Mark Harris, executive director of the Centre for Primary Health Care and Equity at the University of NSW, said that while risk calculators were imperfect, they were far more reliable than basing prescribing decisions on a single risk factor.

“While there may be some overestimation with risk calculators in some populations, a much bigger problem [in terms of overtreatment] is the large number of low-risk people receiving pharmacological intervention based on a single risk factor such as slightly elevated blood pressure or slightly elevated cholesterol”, he told MJA InSight.

He also cautioned that in some populations, such as Indigenous communities, Framingham-based risk calculators had been shown to underestimate cardiovascular risk.