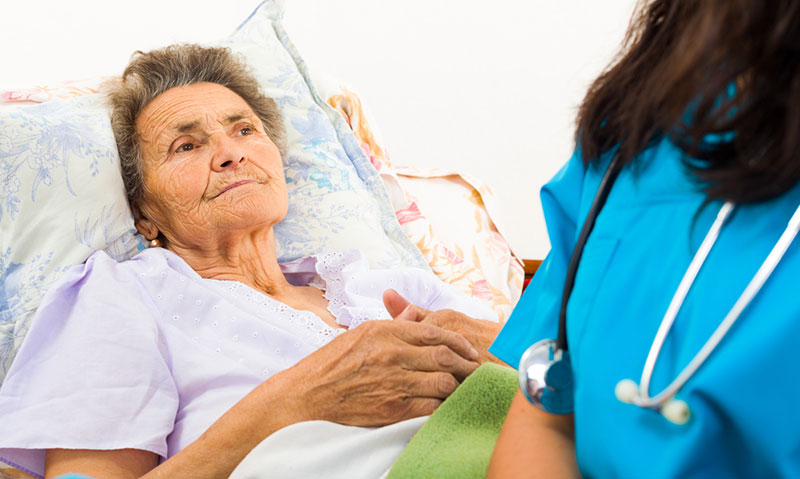 Sarah Colyer
Issue 47 / 7 December 2015
TREATING patients with nursing home-acquired pneumonia at home may be less risky than transferring them to hospital, with new research showing they can be safely treated at home with an intensive medically based program.
A case–control study published today by the MJA found high-level care nursing home patients treated for pneumonia through the Royal Melbourne Hospital’s hospital in the home (HITH) program had similar outcomes to those receiving usual ward-based care. (1)
The study included patients in high-level residential aged care facilities admitted to the hospital with nursing home-acquired pneumonia (NHAP). It included patients treated for acute lower respiratory tract infection (pneumonia, aspiration pneumonia, infective exacerbation of chronic obstructive pulmonary disease, infective exacerbation of bronchiectasis) who were identified in the HITH unit database. The control group included patients with the same diagnoses but admitted to hospital for conventional care.
The hospital provided mobile x-ray, daily doctor visits, twice-daily nursing visits, intravenous fluids and antibiotics, blood tests and 24-hour cover to the HITH group.
The study found no difference between the median lengths of stay for the 60 HITH and 54 control patients, and no significant difference in overall 30-day mortality, after adjusting for baseline differences.
The authors found that despite potential biases related to the study design and other factors, their results suggested HITH “may be effective and safe” for aged care facility residents with NHAP.
With more than 31 000 acute hospital admissions a year in Australia for NHAP, the authors wrote that there would be “substantial impact” from shifting some of these patients to a HITH program that was able to deliver equivalent care.
“This requires well resourced, 24-hour, intensive, medically based HITH, supported by hospital level technologies, including intravenous therapies, expert staff and mobile x-ray facilities, as well as the willingness to switch care models for the high level of disease severity with which these patients inevitably present”, the authors wrote.
Associate Professor Gideon Caplan, a geriatrician at the Prince of Wales Clinical School, University of NSW, told MJA InSight there was now “level 1 evidence that HITH is safer than hospital”.
He cited a 2012 meta-analysis he coauthored of 61 randomised controlled trials, which found relative reductions in HITH mortality of 19% and readmissions of 25%. (2)
Although the latest study was retrospective and non-randomised, its findings closely aligned with existing data, he said.
“The study found a non-statistically significant, but clinically significant 6.6% absolute lower mortality at 30 days, which works out to just over 19% relative reduction in mortality — exactly in line with the meta-analysis”, Professor Caplan said.
Professor Moira Sim, a Perth GP academic involved in research into HITH services, said that in many cases patients were sent to hospital in the mistaken belief that it would increase their chances of living.
“They do not know that for an older person with multiple comorbidities, the likelihood of surviving [cardiopulmonary resuscitation] is miniscule, and that hospitalisation may be associated with complications which might accelerate rather than delay [deterioration to] death”, she said.
Professor Sim raised concerns that patients with pneumonia were being denied the option of staying in the familiar surroundings of their residential aged care facility.
She also noted that mobile x-ray was a relatively unique feature of the Royal Melbourne Hospital’s program, given the logistical and cost barriers.
“The accuracy of a clinical diagnosis of pneumonia is low, and for that reason an x-ray is useful but often difficult to arrange in the [aged care] context”, she said.
The study’s lead author, Dr Michael Montalto, who is the medical director of the HITH unit at Royal Melbourne Hospital, agreed the HITH components were “pretty comprehensive and quite complex to deliver”.
Patients with pneumonia received the same level of intervention in the home as in hospital, he told MJA InSight.
“We explain to families and nursing homes that acute intervention will be given, but that not everyone will respond, and in that case palliation will be arranged at the nursing home rather than transfer a deteriorating elderly patient to hospital”, Dr Montalto said.
All patients in the study had the right to be treated in hospital, and if families or patients insisted on full active resuscitation the patient would be brought to hospital, he said.
However, he added that “patients and families should also have the right to demand treatment at home or in the nursing home”.
1. MJA 2015; Online 7 December
2. MJA 2012; 197: 512-519
(Photo: Lighthunter / shutterstock)
This article was amended on 7 December 2015

6 thoughts on “Hospital in home “safe””