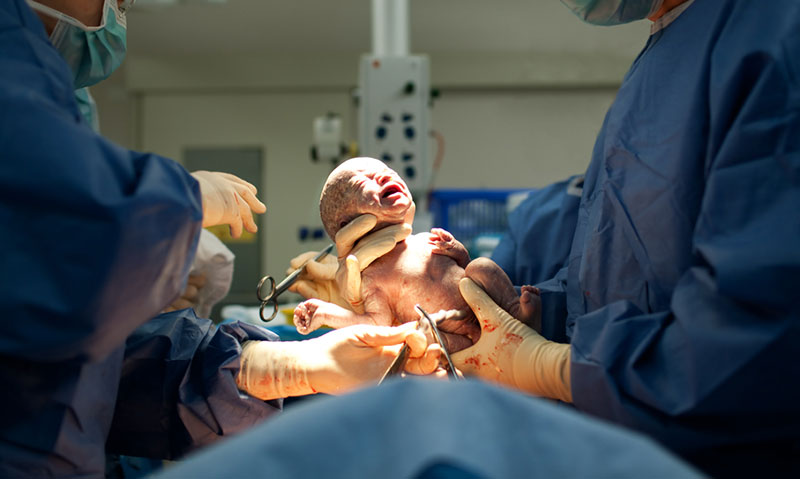 Sarah Colyer
Issue 47 / 7 December 2015
TARGETS aimed at reducing the number of caesarean deliveries have been questioned as new research suggests the WHO rate of no more than 10%‒15% of live births is too low.
A cross-sectional, ecological study published in JAMA last week estimated the contemporary relationship between national levels of caesarean delivery and maternal and neonatal mortality for 172 WHO member states. (1)
Contrary to the WHO’s consensus-based target of 10%‒15% of live births set in 1985, the study concluded that caesarean delivery rates of around 19% were associated with optimal levels of maternal and neonatal mortality.
Although the study authors stressed that the association could not be considered causal with their study design, they said the WHO’s previously recommended targets “may be too low”.
The WHO target was a consensus opinion based on the observation that some countries with the lowest perinatal mortality rates had caesarean delivery rates that were less than 10 per 100 live births, the authors wrote.
With caesarean deliveries compising 32% of live births in Australia, Professor Michael Permezel, president of the Royal Australian and New Zealand College of Obstetricians and Gynaecologists, said the setting of targets by the WHO and others had been “unhelpful”. (2)
“Australia’s caesarean rate is comparable to much of Northern Europe, the USA and Canada”, he told MJA InSight. “Australia is not an outlier; perhaps we are doing the right thing.”
Professor Permezel said the countries with the lowest caesarean delivery rates were generally those with poor socioeconomic conditions and limited health resources — factors that contributed to poor maternal and neonatal outcomes, in addition to the lack of access to caesareans.
However, there were also some Scandinavian countries with both low maternal and neonatal mortality and comparatively low rates of caesareans, he said.
“It’s worth looking at what Scandinavian countries are doing; however, it is unlikely to be the low caesarean rate per se that is responsible for the good neonatal outcomes”, he said.
The authors of the JAMA research said their findings highlighted “a significant correlation between caesarean delivery rate and lower mortality that merits attention in the development of policy to strengthen surgical components of health systems”.
Previous studies on caesarean delivery rates had included fewer countries and had used data from varying years, without accounting for heterogeneity, the authors wrote. Their study aimed to reduce bias by focusing estimates to a single year, 2012.
An accompanying editorial concluded that the optimal level of caesarean delivery could not be as simple as a “one-fits-all figure”. (3)
“The appropriate” caesarean delivery rate remained unknown, the editorial authors wrote, adding that the primary goal of all obstetric services should be patient safety.
Professor Permezel told MJA InSight it was “not the role of obstetricians or midwives to determine the health priorities of women”.
“The vast majority of women just want what’s safest for baby and in many cases that turns out to be caesarean, particularly if the baby is breech or there has been a previous caesarean or there is another situation of increased risk”, he said.
Professor Peter Dietz, an obstetrician and gynaecologist at Western Sydney’s Nepean Hospital, said the goal of reducing caesareans was a “misguided obsession” underlying initiatives such as NSW Health’s Towards Normal Birth policy directive. (4)
“The worst consequence is that focusing on caesarean section rates makes us focus less on morbidity and mortality”, he told MJA InSight.
Professor Dietz said he was particularly concerned that clinicians and midwives were ignoring significant damage to the pelvic floor caused by long, complicated labours in pursuit of normal vaginal delivery.
He gave the example of a resolution by the American College of Obstetricians and Gynecologists last month not to use the rate of severe perineal lacerations as a measure of obstetric quality, partly because doing so would lead to increased caesareans. (5)
“We are ignoring permanent damage to women’s bodies because to care about these things might lead to more caesareans”, he said.
There were also rarer but more serious complications potentially associated with the drive towards natural vaginal delivery, including neonatal asphyxiation, post-partum haemorrhage and uterine rupture in women attempting vaginal birth after caesarean section, Professor Dietz said.
1. JAMA 2015; 314: 2263-2270
2. AIHW: Australia’s mothers and babies, 2012
3. JAMA 2015; 314: 2238-2240
4. NSW Health: Maternity – Towards normal birth in NSW
5. ACOG 2015; Committee opinion
(Photo: Martin Valigursky / shutterstock)

Do you think the rate of caesarean deliveries in Australia is too high?

11 thoughts on “Caesarean target “too low””