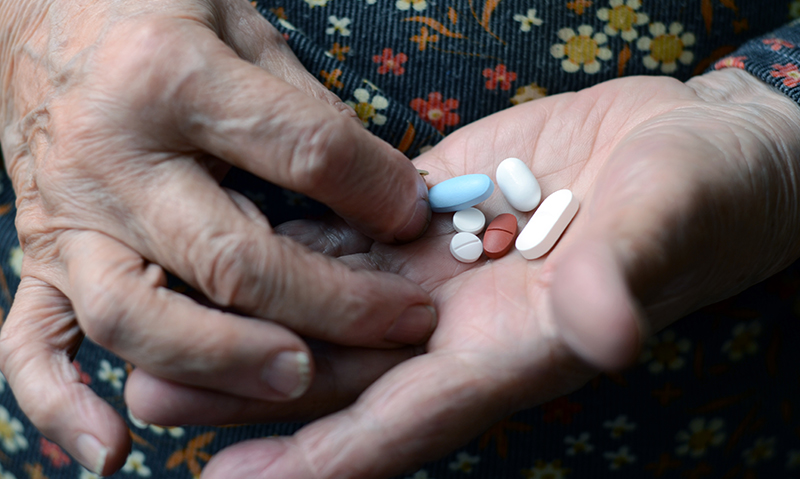 Sarah Colyer
Issue 43 / 9 November 2015
PATIENTS taking five or more prescription medicines are increasingly becoming the norm but experts say the trend most likely reflects appropriate prescribing.
Significant increases in overall prescription drug use and polypharmacy in the past decade have been revealed in a US study, published in JAMA, and Australian experts say similar trends are happening here. (1)
The US National Health and Nutrition Examination Survey conducted household interviews with almost 38 000 individuals between 1999 and 2012, which included asking participants about all the prescription medicines they had used in the previous 30 days.
The research found that 59% of people had used prescription drugs in 2011‒2012 compared with 51% in 1999‒2000.
The proportion of patients taking five or more prescription medicines almost doubled over the period, from 8.2% to 15%.
The study found increases in the uptake of antihypertensive drugs (particularly thiazide diuretics), antihyperlipidaemic agents (particularly statins), antidepressants (particularly selective serotonin reuptake inhibitors, and serotonin and norepinephrine reuptake inhibitors), proton pump inhibitors, muscle relaxants and narcotic analgesics.
For many drug categories — including antidepressants, statins and narcotic analgesics — the largest increases occurred during the middle of the decade but had flattened off after that. There were decreases in the use of antibiotics, sex hormones among women, antiarrhythmic agents and prescription antihistamines.
Figures from the Pharmaceutical Benefits Scheme show the number of prescriptions in Australia rose from 179 million in 1997 to more than 288 million in 2014. (2)
Associate Professor Richard King, chair of the advisory group for NPS MedicineWise’s Choosing Wisely campaign and medical director at Monash Health, told MJA InSight the results were likely to be broadly consistent with trends in Australia.
“I think the findings should be interpreted as largely positive”, he said. “It’s good to see a flattening out in the use of several drugs, particularly the opioid analgesics, which may reflect that patients with chronic non-malignant pain are receiving more appropriate treatments.
“The increasing use of cardiovascular and antidiabetic drugs probably reflects appropriate use of medicines related to increasing incidence of obesity and diabetes”, he said.
He said although the increase in antidepressant use was concerning, “that too may reflect the appropriate increase in diagnosis of mental illnesses”.
Professor Richard Day, director of clinical pharmacology and toxicology at St Vincent’s Hospital, Sydney, said the study’s findings were a mix of positives and potential negatives.
“A lot of this reflects good prescribing”, he said. “People with heart disease, for instance, ought to be being prescribed multiple drugs post-infarct — an antihypertensive, a diuretic, low-dose aspirin, an antihyperlipidaemic.
“I don’t think ‘polypharmacy’ should be a pejorative term”, he said.
However, Dr Day said the overall increases in use of opioid analgesics and antidepressants were potentially problematic.
“One of the big questions is whether we have got the right mix of approaches and priorities, including cognitive behaviour therapy and chronic non-malignant pain services”, he said.
Dr Evan Ackermann, a Queensland GP and spokesman for the Royal Australian College of General Practitioners, told MJA InSight polypharmacy was a “reflection of modern society and survivorship”.
He said people are living longer but often had multiple chronic diseases, and the number of people surviving cancer was also growing.
“One of the big problems with [current] clinical guidelines and practice has been the lack of guidance on multiple morbidity … and when to stop medications”, Dr Ackermann said. “We do not have many good indicators of inappropriate polypharmacy or inappropriate prescribing or even over-prescribing.”
Dr Ackermann applauded new initiatives which encouraged doctors to focus on patients’ “overall health burden” and aim for “minimally disruptive care”, including de-prescribing preventive medications in patients entering their last phase of life, changing medication regimens to suit patient lifestyles, focusing on non-drug treatments and reducing the fragmentation of care that often led to polypharmacy. (3)
The RACGP’s Choosing Wisely recommendations include advice to help GPs limit the inappropriate use of proton pump inhibitors, antihypertensives and benzodiazepines. (4)
1. JAMA 2015; 314: 1818-1830
2. PBS Statistics. 19 August 2015
3. RACGP. HANDI
4. Choosing Wisely Australia: RACGP
(Photo: berna namoglu / shutterstock)

One thought on “Polypharmacy mostly “positive””