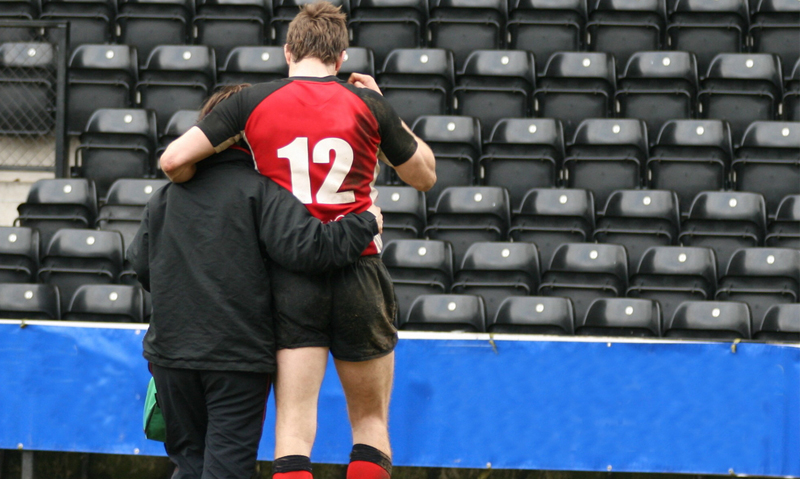 Charlotte Mitchell
Issue 37 / 28 September 2015
WITH the football finals season getting into full swing, experts say improving education and addressing the “gladiatorial culture” in Australian codes is the key to improving the management of concussion.
Dr Andrew Gardner, clinical neuropsychologist and researcher at the University of Newcastle, told MJA InSight that the perception that injury was a badge of honour “dictates to a player that they should not let the team down — so they either do not report their [concussion] symptoms, or they refuse to be removed from play”.
“This is where club doctors, training staff, managers, coaches, and parents — depending on the level of play — need to step in to protect the player from themselves.”
Dr Gardner was commenting on an article by sports physician Associate Professor John Orchard, published today by the MJA, who said Australian football codes had generally adopted measures to reflect guidelines agreed at the International Conference on Concussion in Sport held in Zurich in 2012. (1), (2)
He wrote that despite this, each of the codes continued to observe how other codes managed concussion, with none wanting to change too quickly and alienate traditional fans who enjoyed the excitement of high speed collisions.
Professor Orchard said that a central problem for the Australian codes compared with the US National Football League (NFL) were the rules of substitution. In the NFL, unlimited substitution meant that players could be removed from the match and replaced immediately with a like-for-like positional specialist.
In Australia, limits on the number of players on the bench meant that a like-for-like positional specialist might not be available to replace a concussed player, which could influence the final result of the match, he wrote.
This problem was compounded by both player reluctance to let the team down and the reality that some concussed players could maintain a high level of motor performance despite their injury.
Professor Orchard told MJA InSight that while almost every sports authority agreed that it was unsafe for concussed players to stay on the field, there was still uncertainty regarding how this decision would be implemented.
Part of this stemmed from the issue of diagnosis, because in some cases it may not be clear whether a player’s brain had been injured.
There was also ongoing conjecture over whether there should be a mandatory stand-down period after a clear diagnosis of concussion.
“There is one obvious negative associated with a mandatory stand-down period — the risk is that players may choose to hide symptoms from medical officials because they want to avoid being ruled out”, Professor Orchard said.
Dr Gardner highlighted the importance of education to help players identify the symptoms of concussion in themselves and their teammates, and to understand that these symptoms required investigation from a medical professional.
“We all understand that contact sport requires a certain level of toughness [but] there is a threshold where a decision to remain in play is no longer tough but dangerous — and that threshold when it comes to sport-related concussion needs to be very, very low.
“Any suspected sign of concussion should be managed as a concussion, and a player should be removed from play and assessed. That’s the message that needs to be engrained in all participants of contact or collision sport”, Dr Gardner said.
Professor Orchard said that, ultimately, the immediate future of all the football codes rested on a move towards less tolerance of head contact as part of the game, and a greater ability to substitute players without hurting the team’s chances of winning a match.
He expected that the next round of the Concussion in Sport Group Consensus statement, planned for 2016, would recommend that bodies such as the Fédération Internationale de Football Association (FIFA) consider an additional free substitute for a concussed player, something being considered by the National Rugby League in Australia.
Professor Orchard said more research was needed in Australia to better identify the risk of repeat concussions in rugby league and other football codes, and the impact on a player’s life.
Dr Gardner agreed, saying that his group in Newcastle had been collecting data on these aspects of concussion for the past 3 years.
He said that conducting a prospective study that collected cognitive, psychological, neurological, psychiatric and neuroimaging data during an athlete’s life, and comparing it with the neuropathology found on autopsy following the athlete’s death, was “an important piece of research that will potentially answer the many unanswered questions regarding chronic traumatic encephalopathy”.
1. MJA 2015; Online 28 September
2. Br J Sports Med 2013; 47: 250-258
(Photo: mitzy / shutterstock)

Do you think professional football organisations in Australia are doing enough to reduce head contact in games?