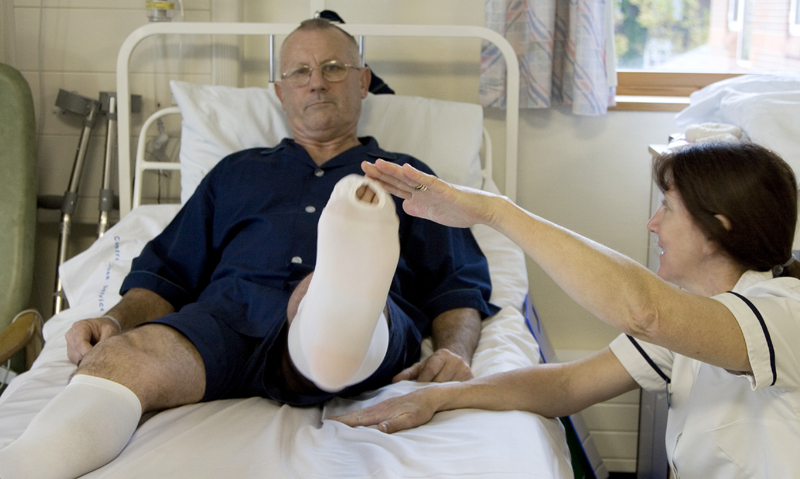 ELECTIVE joint replacement patients are spending too much time in hospital, according to experts, as an Australian study confirms that most patients can be made ready for discharge 3 days after surgery.

The study in this week’s MJA compared the length of hospital stay before and after the rollout of an enhanced recovery after surgery (ERAS) program for elective hip and knee arthroplasty patients at three Victorian hospitals. (1)

The program included training surgical, anaesthetic and nursing staff in an evidence-based approach to enhanced recovery including preoperative oral carbohydrate loading, pre-emptive analgesia with gabapentin, spinal anaesthesia rather than epidural and 13 other measures.

Although the actual reduction in length of stay was only modest (5.3 days before the intervention and 4.9 days after), the proportion of patients deemed “ready for discharge” 3 days after surgery was much greater after the intervention (59% versus 41%).

The study enrolled 709 patients, 297 of whom were in the ERAS cohort.

The study authors wrote that the limited effect on actual hospital stay was because discharge planning practices in hospitals were mostly unchanged.

“There were entrenched hospital practices that prevented earlier hospital discharge even though patients were deemed ready for discharge”, they wrote. “This is due to established ward practices, including a repetitive requirement for many joint replacement patients to undergo their initial rehabilitation program as an inpatient.”

Patients often waited hours or days to be reviewed by rehabilitation services and there was minimal access to physiotherapy on weekends, the authors said.

The study found the impact of the ERAS program was greater for patients undergoing knee replacements than hip replacements, with only knee patients experiencing a significant reduction in length of stay.

Complication rates at 6 weeks after discharge and readmission rates were similar before and after the program rollout. The incidence of acute kidney injury was also similar between groups, despite initial concerns about a potentially increased risk in the intervention group.

“Elective joint replacement patients are generally well patients who should be discharged when mobilising safely and their postoperative pain is under control”, he said. As a “general rule” discharge should be possible on the third postoperative day.

The latest study defined readiness for discharge by whether patients were eating and drinking, had no drain tubes or urinary catheters, were weight-bearing, and had well controlled pain scores at rest and on movement.

Dr Solomon said the success of ERAS programs was limited by patients wanting to stay longer in hospital and by discharge facilities such as rehabilitation units not being available at convenient times.

“Australia needs to improve on its discharge programs”, he said. “Extra physiotherapy staff is required to mobilise patients on the ward to give them confidence they can be discharged sooner — reducing the risk of hospital-acquired complications.”

“This is particularly true for joint replacement patients due to possible need for home modifications and aids and postdischarge follow-up and domiciliary care”, Ms Verhoeven said.

“It is even more pronounced for hip replacements, which may explain the lack of change in patient length of stay compared with knee replacements [in the MJA study].”

To achieve optimal outcomes, hospital quality improvement programs needed to engage all members of the care team across the full span of the care pathway, she said.

A study published recently in The BMJ linked shorter length of stay after hip fracture with increased deaths, with an accompanying editorial warning about the potential for unintended harms as hospitals faced pressure to “do more with less”. (2), (3)

Dr Solomon said it was important to distinguish between elective arthroplasty patients, and emergency patients admitted for hip fractures.

“Hip fractures occur in elderly patients with multiple comorbidities and they are completely different to elective hip and knee patients who are generally younger and healthier”, he said.

Is there too much emphasis on early hospital discharge of patients after surgery?

One thought on “Recovery program support”