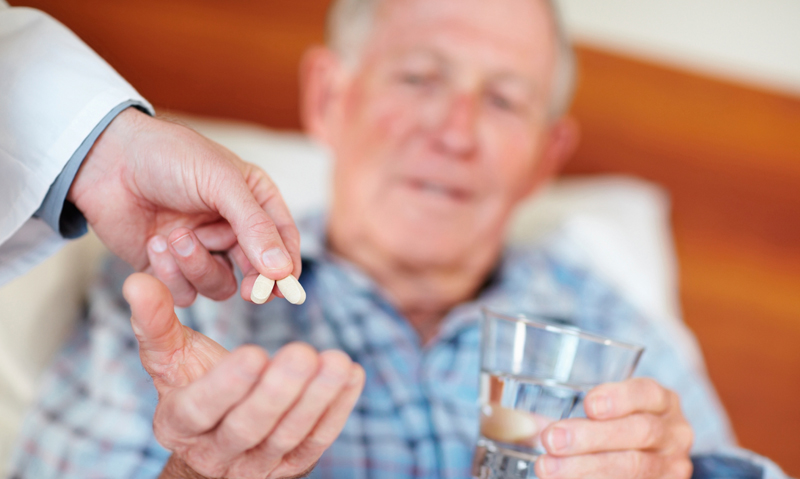 A LEADING pharmacologist says the medical community needs to “get on the same page” when it comes to reviewing medications for older patients, after an Australian study revealed that polypharmacy was not being addressed in acute care hospitals.

Dr Sepehr Shakib, director of the department of clinical pharmacology at Royal Adelaide Hospital, told MJA InSight that “older patients have been on a long journey with their medications, and reviewing which treatments should be continued or stopped is a complicated process”.

“It’s like trying to untangle a knot that has been created by various individuals”, he said.

Dr Shakib was commenting on the study published in this week’s MJA that examined medication changes of 1220 patients aged 70 years or older admitted to 11 acute care hospitals in Queensland and Victoria between 2005 and 2010. (1)

The study authors categorised the number of regularly prescribed medications for each patient as non-polypharmacy (0–4 drugs), polypharmacy (5–9 drugs) and hyperpolypharmacy (more than 10 drugs).

They found that on admission to hospital three-quarters of patients received five or more drugs, and more than a fifth received 10 or more.

Polypharmacy was significantly associated with an increase in comorbidities, presence of pain, and dependence in terms of instrumental activities of daily living.

The authors found that the mean number of prescribed medications per day remained high at discharge, with no clinically meaningful change in the classification (symptoms control, prevention, or both) of drugs prescribed. The prevalence of medications such as statins, opioid analgesics, antipsychotics and benzodiazepines, also did not change significantly.

The results indicated that active attempts were not made in acute hospital wards to deprescribe medications when appropriate, the authors wrote.

However, they said that when and where medications should be rationalised had not yet been established, and home medicine reviews led by pharmacists had so far proven ineffective.

“Perhaps only a medication review underpinned by careful consideration of the health status of the patient concerned, including estimation of life expectancy and exploration of individual goals of care, is likely to result in clinically meaningful outcomes”, the authors said.

Professor Richard Day, director of clinical pharmacology and toxicology at St Vincent’s Hospital, Sydney, told MJA InSight that while the study highlighted a missed opportunity to review patient medication, acute hospital wards generally did not have the resources, or the time, to conduct individual evaluations.

Professor Day instead believed the key to improving the process of medication review was better communication channels between different areas of the health care system.

“We need to be confident that wherever a patient is [in the system], everyone is aware of what medications they are taking”, he said.

Associate Professor Graeme Miller, medical director of the Family Medicine Research Centre at the University of Sydney’s School of Public Health, told MJA InSight that GPs, not hospitals, were the ones best placed to conduct medication reviews, because they had a more detailed understanding of their patient’s history and needs.

He said that individual patient knowledge was vital to the review process, an element which was lacking in the pharmacist-led home medicines review initiative. “This program didn’t do anything. It is drug focused, not patient focused”. (2)

Professor Miller was also concerned that only patients over the age of 70 years were included the MJA study.

“A common erroneous conclusion is that polypharmacy is just a problem for the over-70s, but increasingly younger people are being prescribed preventive medications, like statins”.

The at-risk group for adverse effects from polyphamarcy should be broadened to include patients aged over 45 years, Professor Miller said.

Dr Evan Ackermann, chair of the Royal Australian College of General Practitioners’ National Standing Committee for Quality Care, agreed that medication reviews were largely the responsibility of GPs, but said a multidisciplinary and collaborative approach was still important.

“Perhaps the time has come where monies devoted to home and residential medicine reviews should be directed to piloting general practice-based pharmacists, and establishing medication services within general practice.”

7 thoughts on “Polypharmacy a shared duty”