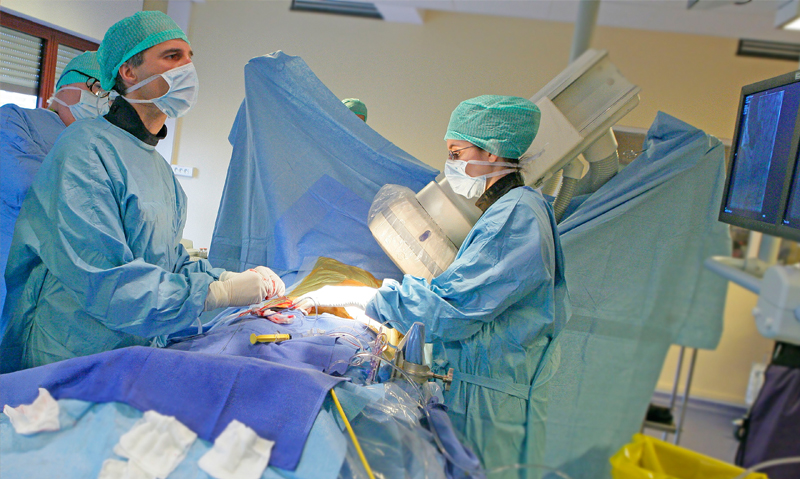 PATIENTS who are too ill for conventional cardiac surgery are benefiting from transcatheter aortic valve replacement, according to new Australian research, although the treatment remains controversial.

The authors reported “good mid-term safety and efficacy through two year follow-up” among the trial participants, all of whom had severe symptomatic aortic stenosis (AS) and were considered high risk of developing complications during surgical valve replacement.

The operations were performed at 10 centres, by surgeons who had not previously implanted the device.

At 30 days, all deaths were cardiovascular (4.1%), which was comparable with rates at highly experienced TAVI centres, the study authors wrote. Cardiovascular death and major adverse cardiovascular and cerebrovascular events affected 11.5% of patients.

However, the authors cautioned that their positive results may have reflected the inclusion of intermediate- to high-risk patients rather than “a purely high risk population”. Major vascular complications, bleeding and pacemaker implant rates were higher than in other studies.

They said they expected these unfavourable outcomes were part of the learning curve, and would decrease as surgeons gained experience in the procedure.

The study was funded by device manufacturer Medtronic, but with independent oversight of clinical events.

Professor Walters acknowledged that new technologies carried new costs and were associated with a learning curve.

He said the evidence for safety, efficacy and cost efficacy “is now well established. It would be good to see greater access in coming years to the technology for the Australian population”.

However, health policymakers have raised concern about inappropriate use of the expensive procedure.

Australia’s Health Policy Advisory Committee on Technology (HealthPACT), which advises federal and state governments on emerging medical technologies, last year released a report concluding TAVI was inferior to cardiac surgery for the majority of patients with AS, saying it did not support its use outside of clinical trials. (2)

Professor Brendon Kearney, chair of HealthPACT, told MJA InSight more than 2000 TAVI procedures had been performed across Australia to date, with most patients so far accessing it for free through special access schemes and clinical trials.

While conventional cardiac surgery cost around $25 000, Professor Kearney said the cost of an implant was typically more than $30 000 and as high as $60,000 for the procedure.

“The rates by centres and states vary enormously around Australia, which suggests that people are using different indications for the procedure”, he said.

Professor Kearney said HealthPACT encountered substantial difficulties persuading some TAVI centres to hand over data on the procedures, as they claimed it was “commercial in confidence”.

“One unit refused to give us information, even though these are public patients being cared for in public hospitals under the public purse”, he said.

A HealthPACT recommendation that all patients being considered for TAVI be first evaluated by a multidisciplinary team is supported by the Cardiac Society of Australia and New Zealand. (3)

Professor Kearney said conventional aortic surgery was still likely to be the safest and most effective option for the majority of elderly patients with severe aortic stenosis, citing a study at Sydney’s Royal Prince Alfred Hospital. (4)

“TAVI should really be restricted to people not suitable for surgery, which we think is only about 10% of elderly people with severe AS”, he said.

However, the study’s lead author Professor Ian Meredith told MJA InSight there was evidence showing TAVI was at least equivalent to conventional surgery in high-risk elderly patients with AS.

"It’s puzzling that the [Therapeutic Goods Administration] has been so slow to approve these, when over 50 countries including the US have approved both of the principle devices based on hundreds of published studies", he said.

The Medical Services Advisory Committee is currently considering an application for Medicare Benefits Schedule listing of TAVI for use in patients who are symptomatic with severe AS and are “at high risk for surgical aortic valve replacement or non-operable”. (5)