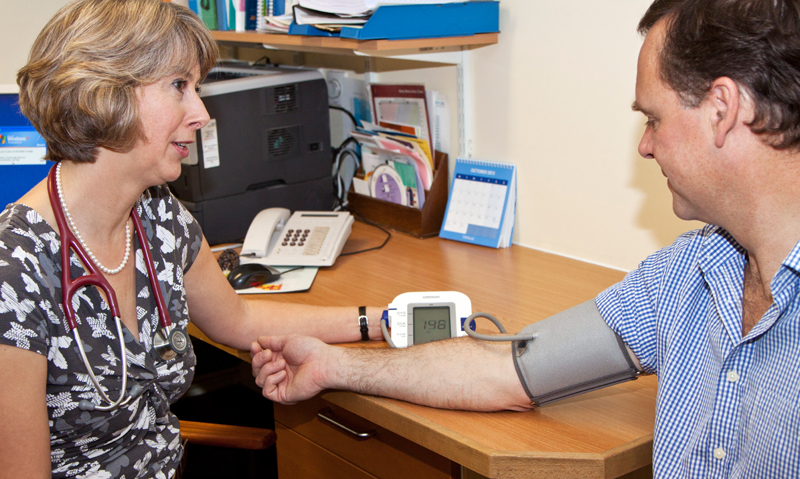 In Australia, Heart Foundation guidelines recommend a systolic blood pressure (SBP) of less than 130 mmHg and a diastolic BP (DBP) of less than 80 mmHg in hypertensive patients with coronary heart disease (CHD), diabetes, chronic kidney disease (CKD), proteinuria (> 300 mg/day) and stroke or transient ischaemic attack, and a BP less than 140/90 mmHg for those without those comorbidities. (1)

However, the two new studies suggest that aggressively overreaching these BP targets may be inappropriate.

A large US retrospective cohort study, published in the Journal of the American College of Cardiology, of almost 400 000 treated hypertensive patients found a U-shaped curve in the relationship between BP and the composite end point of death or end-stage renal disease (ESRD). (2)

A similar hazard curve was observed for patients with diabetes and those aged 70 years or older, though the nadirs shifted slightly.

The researchers said their study added to growing uncertainty about BP treatment targets.

“The potential dangers of overtreatment may need to be considered”, they wrote.

Those in the lower BP group had a 70% increased risk of all-cause mortality compared with those in the higher BP group, a propensity-adjusted analysis found.

The study authors said recently released US guidelines by the Eighth Joint National Committee for the management of high BP in adults “has advocated less stringent treatment targets in patients with CKD compared with previous guidelines, largely because of the lack of conclusive data from clinical trials to support stricter blood pressure targets”. (4)

Professor Garry Jennings, director of the Baker IDI Heart and Diabetes Institute, told MJA InSight both studies were high quality and went to considerable effort to adjust for confounding.

“The study of patients with chronic kidney disease is particularly valuable because these patients are not generally included in the large randomised controlled trials”, he said. “It raises questions about whether the Australian guidelines, which recommend a lower target for this group, should stand.”

However Professor Jennings was reluctant to suggest what the ideal BP targets should be.

“Among older people, I would say in the range of around 140/90, but with a wide tolerance”, he said. “I think this is an area where the art of medicine still applies. If someone is dizzy when standing [it is likely] their blood pressure is too low. Then again, if someone’s blood pressure is low and it’s not bothering them, I wouldn’t change their medication.”

He said individual anatomical differences were likely to be key. "For instance, in CHD patients with a large heart and critical narrowing of the coronary arteries, where the ability to compensate for lower perfusion pressures was lost, aggressive blood pressure lowering could cause ischaemia.

“Someone with healthy coronaries and a normal sized heart could cope with the same level of blood pressure very well.”

"Only upon reviewing all the evidence to date will we consider recommending changes to blood pressure targets for patients with comorbidities", he said.

One thought on “New concerns over BP targets”