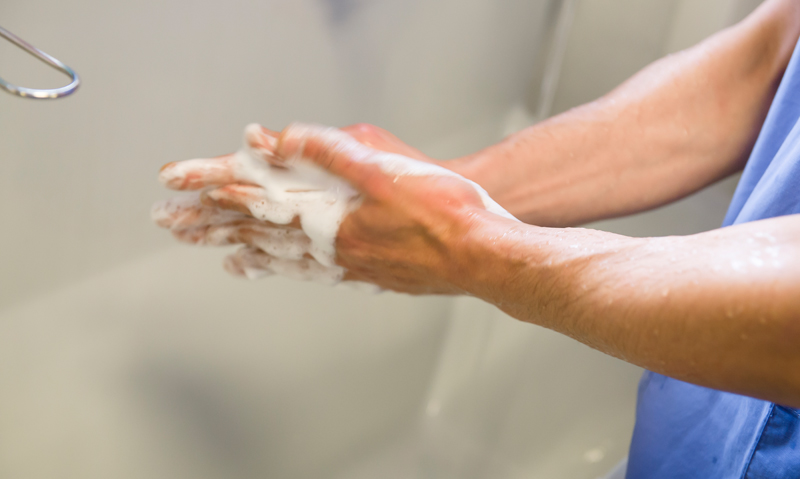 POOR hand hygiene compliance by doctors compared with nurses has been the “elephant in the room” for too long in the battle against hospital-acquired infections, according to a leading infection control expert.

The researchers found that hand hygiene rates were not strongly associated with the overall rate of SABSI.

Professor Lindsay Grayson, director of Hand Hygiene Australia, strongly criticised the research, telling MJA InSight it did not acknowledge evidence of a drop in infection rates coinciding with the introduction of hand hygiene protocols.

“We have never claimed that the drop in hospital infection rates is due to the National Hand Hygiene Initiative and we acknowledge that we can’t directly attribute the decrease to it”, Professor Grayson said.

“But it is clear that a decrease [in infection rates] was observed after the introduction of hand hygiene protocols.”

Professor Grayson said the research methodology had not allowed for a “lag” between the introduction of hand hygiene measures and any subsequent decrease in infection rates.

However, Dr Ferguson said the research was “just what we needed”.

“Doctors have been the elephant in the room for far too long”, he told MJA InSight. “Doctors are very autonomous and they tend to be focused on individual patients. They are not seeing the system-level things that affect patient care on a population level. The individual physician is not in that mind space.

“The challenge is bringing the doctors to see that their actions matter and are critical to patient safety.”

Nurses were more compliant with hand hygiene protocols because they were “very good at lifting their game”, Dr Ferguson said.

Brett Holmes, NSW branch secretary of the Australian Nursing and Midwifery Federation, agreed, telling MJA InSight that nurses were “respectful of the rules”.

He also agreed with the MJA authors who recommended narrowing the focus of compliance protocols to the two most critical steps, before and after touching the patient.

The MJA authors wrote that a third of patient interaction hand hygiene opportunities recorded in their research involved the first of the WHO’s Five Moments for Hand Hygiene, which was before touching the patient. However, they found compliance for this was below the national threshold in 68% of the 82 public hospitals included in the research. (2)

“We must shift our focus to providing medical staff with immediate feedback and move to improving a single hand hygiene indication at a time, starting with before touching a patient”, they wrote.

Mr Holmes said the five actions per patient recommended by the WHO were problematic “when the pressure is on”.

“But if nurses can do it then doctors can as well.”

Dr John Quinn, executive director of surgical affairs for the Royal Australasian College of Surgeons, acknowledged that doctors were “not performing as well as we should” when it came to hand hygiene protocols.

“It’s not a conscious thing”, he told MJA InSight. “It’s about time and habit. Facilities for hand hygiene also vary greatly from hospital to hospital. If [the facilities] are at the end of every patient’s bed, then they tend to be used.”

Dr Ferguson agreed with the MJA researchers that the use of unadjusted average hand hygiene compliance rates as a measure of hospital performance in terms of SABSI rates was misleading and concealed the fact that most hospitals and medical staff were performing below average.

He said compliance was being overestimated because of the observer effect.

“That’s not a bad thing when you’re talking about quality improvement because people comply more when they know they’re being watched but it’s not good in terms of accurately measuring performance. We’re focusing too much on hand hygiene as a performance measure and we’re not facilitating an improved model for action.”

Why do you think doctors are not as compliant as nurses with hand hygiene protocols in hospitals?