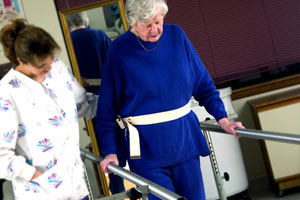 Too many failings in stroke care

STROKE patients are not reaping the benefits of substantial advancements in stroke management and prevention, say experts who have called for a national strategy to improve stroke care in Australia.

An editorial in this week’s MJA calls on the federal government to fund an improvement strategy to address the “staggering” gap between best evidence-based and actual care in many areas of stroke. (1)

The authors, Associate Professor Tammy Hoffmann, a clinical epidemiologist at Bond University, Queensland, and Professor Richard Lindley, professor of geriatric medicine at the University of Sydney, referred to data from the National Stroke Foundation’s audit program, which includes a clinical audit of the stroke care provided to more than 14 000 patients over 4 years.

The authors said the data outlined many failings in current approaches to stroke care. They wrote that less than half of patients transferred to rehabilitation had been in a dedicated stroke unit, despite overwhelming evidence of the benefit of stroke unit care, and only 7% of ischaemic stroke patients had received thrombolysis treatment, despite evidence that such treatment resulted in an extra 10 independent survivors for every 100 patients who received it. (2)

Professor Graeme Hankey, head of the stroke unit at Royal Perth Hospital, said robust clinical research in the past 30 years had resulted in substantial improvements in stroke diagnosis, treatment and prevention, and the time had now come to implement this evidence.

“At the top levels of health care planning, there is inadequate recognition of the burden of the problem of stroke, the evidence supporting effective strategies to reduce it, and the courage to invest in organised prevention and care, and with it, organised and dedicated training and education of staff to implement best practice prevention and care”, he told MJA InSight.

Professor Hankey said while efforts to prevent and cure stroke were complementary, preventive measures were likely to have the greatest impact.

“It would be sad to see only effective treatments implemented without effective measures to prevent stroke — particularly amongst the young, in whom there is a looming epidemic of stroke”, Professor Hankey said.

Professor Christopher Levi, director of the Centre for Translational Neuroscience and Mental Health Research at Hunter Medical Research Institute in NSW, said stroke care had suffered from a lack of government focus. This was partly due to the advocacy challenges associated with stroke, he said.

“Stroke is largely a disease of older people. It’s a disease where people often do not have a voice because they’re disabled, so the advocacy that would underpin the substantial political support that we’ve seen behind cancer, mental health, diabetes, obesity, just isn’t there for stroke”, he said.

Professor Levi noted that the stroke thrombolysis rate was the most glaring evidence–practice gap highlighted in the editorial. He said that while the rate of thrombolysis had increased slightly from 3% in the audit of 2009 to 7% in the latest audit, it still fell far short of the number of patients who could potentially be eligible and benefit from this cost-saving treatment.

He agreed that a national stroke care improvement strategy could help to close the evidence‒practice gaps highlighted in the editorial.

“If you were to do a little bit more at a state and federal level to make stroke a focus, then there’s a chance that we can improve this, but working as we are at the moment as a loose-knit community of clinicians and academics, it’s very hard to really pull this off”, said Professor Levi, who also sits on the Stroke Foundation’s clinical council and has been on the foundation’s guideline committee.

A spokesman for Federal Health Minister Tanya Plibersek said the government’s contribution to stroke care was primarily through Medicare, the PBS and funding to state and territory governments for public hospital services. Additional investment was through major research and prevention initiatives, he said.

“The … editorial concerns issues in service delivery in acute care and post-stroke rehabilitation. State and territory governments are the system managers of the public hospital system, [and] are responsible for making decisions on stroke care provided in accident and emergency departments (such as use of thrombolysis), establishment and operation of stroke units and the delivery of rehabilitation services”, he said.

2 thoughts on “Too many failings in stroke care”