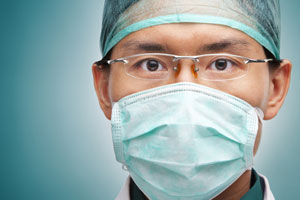 SURGICAL masks, currently available for between 14 and 50 cents each, are a low-cost, convenient solution to the risk of iatrogenic septic arthritis, says a leading infection prevention specialist.

However, Associate Professor Allen Cheng, deputy head of infection prevention at The Alfred Hospital in Melbourne, said the question was where to draw the line on wearing a mask, particularly in very low-risk procedures such as vaccinations.

Professor Cheng was commenting on a case report in this week’s issue of the MJA about a prosthetic shoulder infection which may have been caused by an intra-articular injection performed by a proceduralist not wearing a mask. (1)

Dr Nicholas Coatsworth, microbiology registrar at Royal North Shore Hospital in Sydney, and coauthors detailed the case of a 72-year-old man with a prosthetic right shoulder joint who presented with fever, a warm, swollen shoulder joint, pain on passive movement of the joint and an elevated C-reactive protein level less than 24 hours after receiving an injection into the joint of 8 mL of radiographic contrast before a computed tomography (CT) arthrogram of his shoulder.

After aspiration of the joint, culture yielded light growth of Streptococcus mitis group 1, the authors wrote. The proceduralist — who used aseptic technique for the injection, but did not wear a mask — provided an oropharyngeal swab and several organisms were cultured from it, including multiple viridans Streptococcus species.

Pulsed-field gel electrophoresis was performed on the samples, and the authors found that “the patient’s organism and a strain of the S. mitis recovered from the proceduralist’s throat showed indistinguishable fragment patterns”.

“This strongly suggested droplet transmission of the proceduralist’s oral flora onto the needle or skin, with subsequent inoculation into the shoulder joint”, they wrote.

“This is the first published instance of molecular epidemiology technique showing probable transmission of oral flora from a proceduralist to the joint of a patient, resulting in iatrogenic septic arthritis.

The man had joint failure 6 months after the acute presentation, confirmed on arthrogram and by arthroscopy, and underwent a full revision of the right shoulder prosthesis. “The procedure was uncomplicated, and the patient remains well with no signs of recurrent infection”, the authors wrote.

Professor Cheng said the case study raised an issue that had largely been invisible.

“I suspect there are more cases like this one happening than we know about”, he said.

“These were questions we learned a long time ago, about aseptic technique. Increasingly it’s being recognised that it is the little things that we do [in preventing infection] — or don’t do — that can add up to a bit of risk.”

Professor Cheng said that while surgical masks were a cheap and convenient way of reducing the risk of iatrogenic infection, it was a question of how far to push the use of surgical masks.

“There is a point where the risk of transmission is so low — giving vaccinations for example — but where do you draw that line?” he said. “Is it giving steroid injections? Or epidurals?

“The spectrum of risk is small enough that you can really only make recommendations about wearing surgical masks. The risk is not great enough to legislate.

“There’s still a little bit of an open question — it’s never completely clear that the organism that caused the infection [in this case] came from the mouth of the proceduralist — but it would make sense to use surgical masks in that situation, particularly as the cost of using them is so low”, Professor Cheng said.