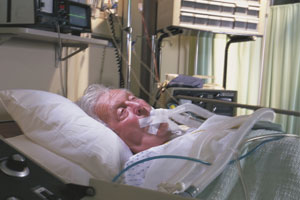 A LEADING Australian ethicist wants to drop the word “futility”, teach doctors to communicate about ethics and bring medical teams and families together to make end-of-life decisions clearer.

Responding to a new series on ethics and law in the latest MJA, Professor Charlie Corke, who is also an intensive care specialist with Barwon Health in Geelong, said clinicians work “every day, all day” along ethical guidelines, but “most don’t articulate those principles very well”. (1)

The first part in the MJA series is based on a hypothetical case study presented by Professor Bogda Koczwara, of the department of oncology at Flinders Medical Centre in Adelaide. The case involves “John”, a 63-year-old farmer with end-stage oesophageal cancer who is estranged from his wife and sees his children infrequently. Despite this infrequent contact, John’s son objects to the palliative approach being taken with John’s care and requests that “everything possible should be done” to save his father. (2)

Professor Koczwara discusses John’s case from a clinician’s point of view, particularly the difficulty of dealing with issues related to futility of treatment for the patient, their family and medical staff.

Professor Dominic Wilkinson, from the department of neonatal medicine at the University of Adelaide, presents an ethicist’s viewpoint, saying that although most cases are resolved by consultation, it is ethical for a doctor to refuse to provide treatment if it is not in the best interests of the patient. (3)

Professor Cameron Stewart, from the Centre for Health Governance, Law and Ethics at the University of Sydney Law School, provides a legal perspective, recommending a procedural approach in difficult cases. (4)

Professor Corke said the series of articles highlighted that ethics were inseparable from a doctor’s daily work.

“Every patient you admit has some ethical questions that have to be answered, particularly in the intensive care unit where that patient may not be able to express their opinion”, he said.

“Some clinicians resolve that by trying to do everything possible for the patient, but that’s not the approach of most intensivists.

“We have the desire to use the resources available to the best of our ability, and then there’s the desire not to put the patient through awful treatments that may not provide much benefit.”

Professor Corke said that in the case presented there were missed opportunities to allow the patient to have his say. “Those chances are frequently missed by doctors. It would have been ideal to have these kinds of conversations early in the course of his cancer”, he said.

Communication, or the lack of it, was one of the biggest problems facing clinicians providing care for patients approaching the end of life, Professor Corke said.

“Junior staff are usually the ones speaking with the families and usually they’re not very good at it”, he said.

“The senior consultants rarely talk with the families, and the result of all that is there are often multiple mixed messages which can be very confusing for the patient, the families and the doctors.”

Professor Corke said that in what could be a fragmented health system, there had to be a way to bring everyone together.

“The person with the best ability to bring all this together is the GP, but of course they are the person furthest from this conversation.”

Professor Corke said education for clinicians about how to communicate about the ethics of end-of-life treatment would be worthwhile.

He also argued that the use of the word “futility” was counterproductive in a clinical setting.

“I vehemently try to avoid it”, he said. “It’s a very rejecting, confronting word, a real conversation stopper. I prefer to talk about burden versus benefit. It allows for a more positive dialogue.”

In the introduction to the MJA series, Professor Wilkinson said there was some way to go before the approach to conflicts about end-of-life treatment “is universalisable, consistent and respectful of different values”.