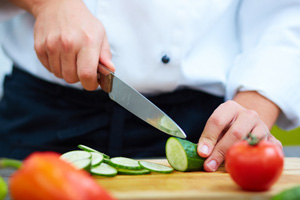 LEARNING to cook could be one of the best things GPs can do for their obese patients, says leading Australian nutritionist Dr Rosemary Stanton.

Dr Stanton was responding to a research letter, published in JAMA Internal Medicine, which showed significant correlations between clinicians’ self-reported dietary quality and their ability to advise patients on nutrition and lifestyle changes after having cooking lessons. (1)

The US research involved an anonymous survey of health professionals attending a 4-day education conference called “Healthy kitchens, healthy lives: caring for our patients and ourselves” (2)

Registrants were asked to report their own nutrition-related behaviours at the start of the conference and, again, 12 weeks later. Of 387 registrants, 192 completed both surveys.

Dr Stanton told MJA InSight that if doctors had never cooked for themselves, it would be problematic trying to tell an obese patient how to cook and eat healthy meals.

“Years ago the antismoking campaigns were hopeless as long as doctors smoked”, she said. “They found it very hard to be advocates for not smoking. When they gave up smoking themselves they became advocates.

“The same applies here. And [GPs] are important opinion leaders”, she said.

“Both ministers were aware that their staff were eating very badly and even with their workload, they still took the time to cook for them once a week. That’s setting a good example and doctors have to do the same for their patients”, Dr Stanton said.

“Practical information is very important and, like it or not, the medical profession is the first port of call for many people seeking help for obesity.”

Professor Garry Egger, professor of health and human sciences at Southern Cross University, said while he thought cooking classes for doctors was a good idea — “it’s well proven that if you’re a good example, you will have more success with helping your patient change their lifestyle” — it was also a question of cost-effectiveness.

Professor Egger said he didn’t think the strategy was cost-effective in the long term because doctors had to live in the real world, surrounded by messages of consumerism, just like their patients.

“Governments have to accept that the life we are living is not conducive to good health. Measures like food education for doctors are palliative if the environment around them doesn’t change.

“We have to make social and environmental changes at the macro level but nobody is prepared to do that because we’re too comfortable”, he said. “Our system of economic growth means we are driven to consume.

“Individual change is possible but you’re lucky if you can get one in 10 [patients] to change.”