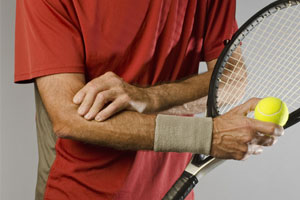 Spare the steroids in tennis elbow

DOCTORS should forget about using a corticosteroid injection for the treatment of tennis elbow in all but the most painful cases, according to a physiotherapy and pain management expert.

Professor Darren Rivett, of the School of Health Sciences at the University of Newcastle, NSW, said a new study published in the JAMA reported that even placebo injections showed lower recurrence rates for lateral epicondylalgia after a year than corticosteroids. (1)

Patients estimated their global rating of change at 4, 8, 12, 26 and 52 weeks, using a 6-point Likert scale, ranging from “complete recovery” to “much worse”.

However, Professor Rivett did not believe the news was not all bad for physiotherapy.

“Results showed that the recurrence rate 1 year after corticosteroid injection with no physiotherapy was 55%, while the addition of a course of physiotherapy interventions made almost no difference, at 54%”, Professor Rivett said.

“But physio with the placebo injection had a recurrence rate of just 5% after 52 weeks. That suggests that the physiotherapy intervention is compromised by the corticosteroid”, he said

The researchers said the high recurrence rate with injection may occur because “corticosteroids do not address key features of tendinopathy”, or that they may be deleterious to the tendon “through an effect on fibroblasts’ role in collagen and extracellular matrix protein production”.

“Physiotherapy should not be dismissed altogether because in the absence of the corticosteroid, it provided short-term benefit across all outcomes, as well as the lowest recurrence rates and 100% complete recovery or much improvement at 1 year”, the researchers wrote.

Professor Rivett said the results showed that “physiotherapy following a placebo injection was the most successful strategy, with a recurrence rate of just 5% after a year”.

“Placebo injection alone had a recurrence rate of 20% after the same period”, he said.

There was additional benefit to physiotherapy intervention because of a lesser need for analgesic treatments in the long-term.

“My take-home message from this study is that unless there is severe pain or dysfunction that would benefit from the short-term effect, there is no great benefit in a corticosteroid injection”, he said.

6 thoughts on “Spare the steroids in tennis elbow”