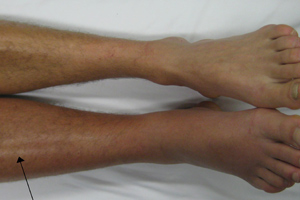 A SHARP rise in the number of referrals for pulmonary embolism-related imaging but no fall in mortality from the condition have called into question testing protocols, say WA researchers.

While WA hospital admissions for PE increased by 45% over the same period, the death rate from PE did not fall (P = 0.19), according to the audit. The increase in PE-related testing was driven entirely by increased referrals for computed tomography pulmonary angiography, which increased fivefold over the study period.

The research was prompted by widespread concern that a standard assessment used in WA teaching hospitals — the modified Wells score coupled with a D-dimer assay — was resulting in more, not fewer, referrals for imaging.

“There was no reduction in PE mortality in the state as a result [of increased testing], and the increase in hospital separations we have observed is likely to be explained by increased detection and overtreatment of clinically insignificant PE. These results call into question the wisdom of a ‘rule out’ strategy for PE, particularly among patients presenting to hospital emergency departments with non-specific symptoms, and indicate the need to re-evaluate the way in which D-dimer testing is used to screen patients for VTE in our hospitals”, the study authors concluded.

Dr Sally McCarthy, medical director of the Emergency Care Institute of NSW, said the study raised several critical issues, including the inability of protocols and guidelines to keep pace with the increasing sensitivity of testing.

“If new or more sensitive tests become available, we continue to manage the testing the same way, even though we’re in a dynamic environment”, she said.

Dr McCarthy said “shotgun testing” for PE was concerning. “It wastes not only the time of the person administering the test and the time of the laboratory in checking for it, but it … causes the patient to stay in emergency for longer”, she said. “That’s poor quality care and inefficient use of resources.”

Vascular surgeon Professor Ken Myers said the study indicated that a lot of taxpayer’s money was “going down the drain with no visible benefit”.

However, he said the trend was driven partly by doctors, who were anxious about missing a PE, and partly by patients, who were hesitant to rely only on a physician’s clinical judgement and demanded the latest technology to have the condition ruled in or out.

Professor Myers said this was understandable. “If I was the patient with the suspicion of a pulmonary embolism I would be down to have my pulmonary CT immediately.”

Dr McCarthy said patient demand was only a minor factor in the increased use of imaging.

“It’s driven much more by a misunderstanding of the complex assessment that has to occur on using a test appropriately.” She said guidelines and protocols were often developed by interest groups without appropriate consideration of the flow-on effects, such as the impact of unnecessary interventions or the opportunity cost to the system or other patients.

Dr McCarthy called for a more holistic assessment of the impact of testing protocols on both the patient and the system.

She said implementing “sensible test-ordering protocols” in emergency departments had been shown to improve efficiency and quality of care.

“There’s an over focus on pushing for diagnosis of everything and a lack of focus on the cost of poor quality testing.”

Professor Myers said the paper was an important reminder to clinicians to “think hard” before ordering expensive investigations.

However, he doubted it would have any impact on clinical practice.  “I don’t think that anyone is going to be game enough to put into practice what [this paper is] quite properly advocating, which is to cut back on the investigations and use your clinical judgement … to [better] select your patients”, he said.

“That’s what we were all taught in medical school, but in this technology-driven age, it’s taken a bit of a back seat.”