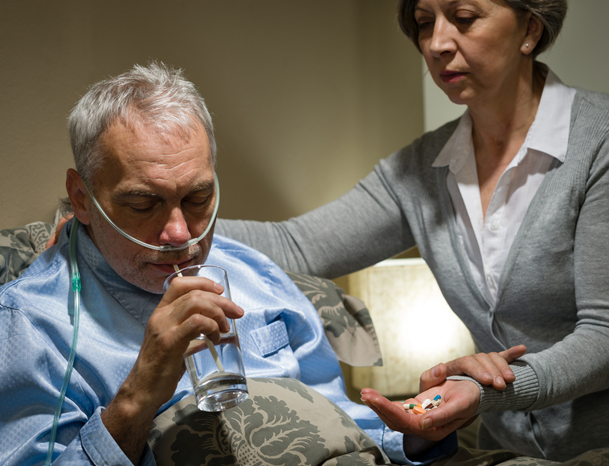 THE complex decision to deprescribe medications for a dying patient should not be left to GPs alone, say leading Australian palliative care experts.

A letter published in the latest MJA highlights the need for “vigilance in identifying polypharmacy in the terminally ill”. (1)

“Effective management of polypharmacy involves discontinuing medications deemed no longer necessary, if it is safe to do so”, the letter authors wrote. “This can be achieved by regular review … by the physicians involved in their care … In our experience, regular review is more likely to be done if one physician is identified as having responsibility for this.”

Professor Patsy Yates, president of the Palliative Care Association, agreed, but told MJA InSight that always leaving it to the GP was “a big ask”.

“In many cases leaving it to the GP may be appropriate”, she said. “It depends on the level of complexity of medications involved. It may be that in the end it’s worth a referral to the specialist.”

Professor Michael Ashby, director of Palliative Care at Royal Hobart Hospital, said the potential complexity of polypharmacy in the terminally ill was a matter of timing.

“If the patient is in the terminal phase of their illness, that is, within days of death, then quite simply we would stop everything that isn’t necessary for the patient’s comfort”, he told MJA InSight.

“Statins, hypertension medications, even some diabetes medications that are there for long-term protection or prevention — those we would stop immediately.

“The problem comes earlier when the disease is terminal but the patient is still in the palliative care phase and may be weeks or months from death. It then becomes a matter of judgement about whether it’s worth maintaining medication for preventive or protection purposes.

“For example, if someone had severe heart failure, then we wouldn’t stop the diuretics — that would be just crazy — but we might consider stopping medications that are being taken for long-term cardiac protection.”

Professor Michael Woodward, director of aged and residential care services at Austin Health in Melbourne, said deprescribing medications was, in some ways, harder than prescribing them in the first place.

“Deprescribing is not taught well”, he told MJA InSight. “Most people are just not good at it.

“There’s also the issue that when you stop a medication that someone has been on for 20 years or more, it can send the message to the patient that perhaps the doctors are giving up on them.”

Professor Yates agreed that good communication was vital in polypharmacy issues, as it was with all end-of-life discussions.

“This is a conversation with patients and their families that needs to be had”, she said.

“There is a skill in being able to talk to people about the goals for end-of-life care, about understanding when medications will no longer have therapeutic benefit.

“Communicating all that without sending a ‘giving up’ message requires considerable skills and often a team approach is the best way. That’s why leaving a review of medications to the GP is such a big ask.”

Professor Ric Day, director of clinical pharmacology and toxicology at St Vincent’s Hospital, Sydney, said some long-term medications could actually be harmful to patients in the last weeks of their lives.

“The core question is, what does the patient really need?” he told MJA InSight.

“If the patient is not as mobile as they once were, for example, and they are on hypertensives, lower blood pressure than they are used to can cause falls, which can lead to injuries.

“Palliative care drugs are usually psychoactive and if they are already taking some opioids, for example, that can add to the burden.

“We don’t want patients spending their remaining time worrying about complicated medication regimens — all that does is add to their anxiety and stress”, he said.

3 thoughts on “Polypharmacy a dying dilemma”