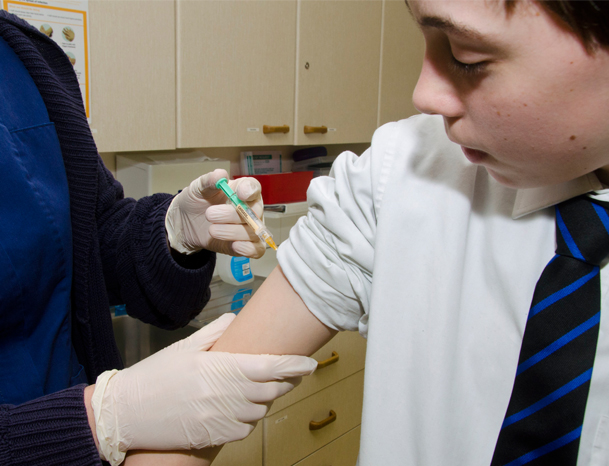 THE second round of the first year of human papillomavirus vaccinations for adolescent boys has been completed with no reports of serious adverse outcomes, says the director of the National HPV Vaccination Program Register.

Dr Julia Brotherton said the current program in Australia was the first national human papillomavirus (HPV) vaccination program for boys in the world and there was “a bit of responsibility” attached to its safe roll-out.

Dr Brotherton said enhanced surveillance with the quadrivalent HPV vaccination program for boys had revealed some adverse events, but these were mild and there had been nothing unexpected. (1)

Dr Brotherton welcomed research, published in the latest MJA, which has established background rates of potential adverse events following vaccination in a group of Victorian boys aged between 12 and 16 years. (2)

“This is very useful data for us”, Dr Brotherton told MJA InSight.

A Melbourne research group used statewide hospital morbidity data to estimate the background rates of neurological and allergic events in boys aged between 12 and 16 years. They found the rates in Victoria to be 252.9 and 175.2 per 100 000 person-years, respectively. Events searched for included Guillain-Barre syndrome, anaphylaxis, seizures and syncope.

“Such adverse events may be mistakenly assumed to be caused by vaccination, owing to temporal association, when the 4vHPV vaccination program is expanded to include adolescent boys”, the researchers wrote. “Postlicensure safety assessments of 4vHPV vaccine programs in adolescent girls have shown little evidence of increased risk of neurological and allergic adverse events after vaccination.”

“While current passive surveillance system reporting is likely to underascertain postvaccination events, prior knowledge of expected numbers of events are valuable in helping determine whether reports or clusters of reports represent real safety flags that require urgent investigation”, they wrote.

The researchers said their study highlighted the value of state and national health datasets to provide information that could improve public safety. As well as establishing background rates of diseases, these datasets could be used to link vaccination databases to health care event databases, “enabling direct investigation of potential associations with adverse events” following vaccinations, they said.

Dr Brotherton said the study provided a baseline which was useful as the Registry monitored the HPV vaccination roll-out for adolescent boys.

Boys in schools across the country started receiving the first vaccinations in February this year, and the second vaccinations began 1–2 months later.

“The second round seems to have gone quite smoothly”, Dr Brotherton said. “We haven’t heard of any issues on the ground.”

A third and final dose is due to be administered 6 months after the first.

“We’ve been looking very hard for adverse events and what we’ve found is that it seems to be a really safe vaccine”, she told MJA InSight.

“There’s been a lot of regular reporting and enhanced surveillance and there haven’t been any issues.”

Dr Brotherton said the Melbourne study was an “elegant” use of readily available data.

“We have these data resources, and they would be even more useful if we could link them together. We’re not making the best use of the data right now, but this study is a lovely demonstration of how useful it can be.”