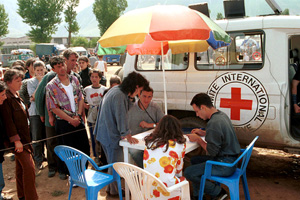 James Lawler, of the Australian Medical Students Association, said students were given little guidance by medical schools about overseas placings and as a result were in danger of being “out of their depth”.

He was responding to research published in the latest MJA which showed that 53% of graduate-entry program medical students and 35% of high-school entry students opted to do international medical electives (IMEs), with more than half of each group going to developing countries. (1)

“Predeparture training was offered by 12 of the 16 Australian medical schools, but it was mandatory in only six”, the authors wrote. Only eight schools offered postelective debriefing, and of those, only three made it mandatory.

Mr Lawler told MJA InSight there were “no defined criteria” which medical schools could use to quantify predeparture training.

“This training should, at the very least, explore the ethical and legal issues which a student will face in a low-resource setting, a background of the culture of the specific community they will be visiting and how this may impact on health care, as well as communication skills, which should take into account basic language training”, he said.

“[IMEs are] a really positive aspect of medical education which should be encouraged by all medical schools and training programs.

“We need to find arrangements which maximise [the] benefits and minimise the risks, both for the visiting students and the host community.”

Mr Lawler said students could face ethical dilemmas when asked to practise medicine or perform procedures for which they were not adequately trained.

“One study found that Fijian doctors incorrectly assumed that final-year British medical students could diagnose and prescribe without supervision, and were not aware that this would not be allowed in Britain”, he said. (2)

Host communities also faced the problem of having to spend valuable time, money and resources translating for and training Australian students who, more than likely would never return to that setting to practice, he said.

Australian students were rarely placed with high-profile and well organised groups such as Médecins Sans Frontières , he said.

“Instead they are more often placed with the local community either through their own volition and investigation, or through a company which will organise placements for them.

“[But again] there is very little regulation”, he said.

“Medical schools and training programs should be looking to develop sustainable, long-term relationships with health care institutions and communities to ensure that, wherever possible, students can attend IMEs in locations where the health system can handle the burden of educating medical students, has experience in educating medical students in past instances and is also aware of the level of training which these medical students have acquired, and which tasks are appropriate for them to perform”, Mr Lawler said.

MJA InSight contacted the deans of medicine at two universities for comment but they had not responded by publication.

A “For debate” article in the same issue of the MJA argued the need for formal systems of global health training in Australia to produce doctors with the skill and knowledge needed to engage in regional health challenges. (3)

“[Global health] training based on sound principles has the potential to provide rewarding training experiences for Australian trainees, broker relationships between Australian and overseas health services and education providers, and build health care capacity in host communities. The establishment of international academic partnerships would also lend itself to enhanced regional research capabilities”, the authors wrote.

One thought on “Overseas electives put students at risk”