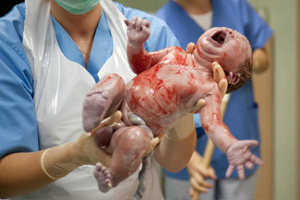 GIVING medical students practical experience in obstetrics is not just about “catching babies” but is an “essential part of a total medical education”, and medical deans around the country should make it a priority, says a leading obstetrician.

Professor Michael Permezel, president of the Royal Australian and New Zealand College of Obstetricians and Gynaecologists, was responding to an article in the latest MJA which asked if medical students should deliver babies. (1)

Professors Caroline de Costa and Ajay Rane, both from the department of obstetrics and gynaecology at James Cook University in Townsville, said that due to increased student numbers and competition from student midwives, the opportunities for medical students to take part in birth was declining.

“Until the late 20th century, all medical students were required to perform at least some normal (uncomplicated) deliveries, under the watchful eyes (and, at times, the hands) of senior midwives”, the authors wrote.

“These requirements have been reduced owing to increased student numbers, increased competition from student midwives for attending births, decreased birth rates and increased caesarean section rates, competing demands from the many new disciplines now included within the medical course, and a greater say by women themselves in what happens to them during labour and birth.”

The authors cited a 2008 survey of the 19 Australian medical schools that showed only 10 had mandatory requirements for students to perform between one and four deliveries. (2)

“Our experience over the past 10 years has confirmed our belief that the requirement of compulsory deliveries … sends a clear message to students and staff that delivering a baby under the skilled direction of a midwife is an important step towards becoming a doctor”, the authors wrote.

Professor Permezel, from the department of obstetrics and gynaecology at the University of Melbourne, went even further, saying “students learn a lot more from obstetrics than just catching babies”.

“Yes, the actual mechanics of childbirth are important to learn”, he told MJA InSight. “Every doctor, no matter what their speciality, will care for pregnant women. Knowing what they are going through, what their issues are, is important.

“Medical students gain a certain emotional maturity and enhanced communication skills by going through that experience with parents, who can be highly emotive.

“They will also learn about pain relief and fluid management — skills that are useful more generally”, Professor Permezel said.

He said that despite increased numbers of students and competing interests, making delivering babies a compulsory part of medical training was “absolutely doable”.

“It’s a matter of what priority the medical deans and teaching hospitals put on the education of their students”, he told MJA InSight.

“If the deans give obstetrics its rightful place in medical education then they will exert pressure on the hospitals to get that balance right.

“This is not just about catching babies”, he said. “It is the deans’ role to provide the community with the all-round, best possible graduates.”

Professor Justin Beilby, president of the Medical Deans Australia and New Zealand, said that he agreed that obstetrics practice was a “core part” of a student’s medical education and that medical deans had a responsibility to ensure students were able to deliver two or three babies during their obstetrics rotation.

“It is difficult [given the competing interests and increased student numbers] but it is my view that we should hold to that aim”, Professor Beilby said.

“I don’t think the number of medical students will increase much more — we are approaching status quo — and perhaps it is time we looked at this in different ways.”

Professor Beilby said the private system was already used to provide some clinical training. “Perhaps we need to focus a little less on the public system”, he said