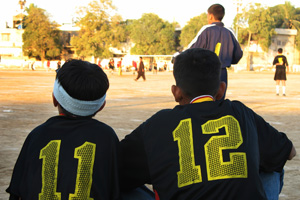 A LEADING Australian neurosurgeon says concussion in children is often not recognised and is poorly understood, with potential for huge problems for children with multiple injuries in later life including possible encephalopathy.

Professor Andrew Kaye, director of the department of neurosurgery at The Royal Melbourne Hospital and professor of surgery at the University of Melbourne, said there were increasing concerns about the effects of multiple concussions, particularly in professional sports.

Professor Kaye, who is also a director of the Hawthorn Football Club and who recently coauthored an overview of concussion in sport, said that while the issue of concussion in professional sport generally related to whether and when the player should return to the field, in children’s sport it was often not even recognised or was treated as a trivial injury. (1)

He was commenting on new research in the US, published in the Archives of Pediatrics and Adolescent Medicine, which compared cognitive and somatic (postconcussive) symptoms and consequences among children with mild traumatic brain injury (TBI) with symptoms experienced by children with orthopaedic injuries in the year after the injury. (2)

The prospective study followed 186 children aged 8–15 years with mild TBI, and 99 with orthopaedic injuries, with parents rating symptoms before injury and then over the following 12 months.

It found children with mild TBI were significantly more likely than those with orthopaedic injuries to show reliable increases in both cognitive and somatic symptoms. These symptoms were more common among children with loss of consciousness or abnormalities on neuro-imaging. Increases in symptoms were associated with significant declines in health-related quality of life and an increased likelihood of educational intervention.

“Research is needed to clarify which injury- and noninjury-related factors increase the likelihood of reliable increases in postconcussive symptoms”, the authors said.

They also said health providers needed to be able to identify children with mild TBI at risk of persistent postconcussive symptoms so they could be targeted for appropriate treatments.

An editorial in the same journal said there was a growing body of research to show that the group of injuries classified as mild TBI should not be treated as minor injuries. (3)

The editorial said millions of children in the US played sport and “increased physical activity is an important part of the public health message to decrease obesity in both children and adults”.

“How do we promote the engagement of youth in these sports and, at the same time, ensure that they are safe from concussion?”

The editorial called for better methods to assess concussive injuries in youth and the timeline of recovery from these injuries.

Professor Kaye said he agreed with the editorial, saying current assessment tools used to determine concussion, particularly in children, were not adequate.

He said there was enormous potential for ongoing problems caused by concussion in sport. “It’s not just one or two concussions, and not just whether [injured players] should go back on the ground, but more about whether subconcussive head injuries could have a cumulative effect.”

Professor Kaye said the issue came to prominence in the US 2 years ago with reports of concussed gridiron players committing suicide and being diagnosed with dementia.

The overview article Professor Kaye coauthored said there was no universal agreement on the definition of “concussion”.

The overview authors said parents and coaches of young athletes needed to be well versed in recognising symptoms and signs of concussion and postconcussion syndrome, and in understanding the seriousness of the condition, particularly with regard to re-injury.

One thought on “Concussion under-recognised in children”