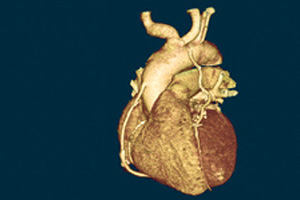 Slow down on new CT use

A CLINICAL update of appropriate indications for computed tomography coronary angiography published this week in the MJA aims to prevent misuse of this new technology. (1)

The article said use of multidetector computed tomography as a non-invasive test for coronary artery disease (CAD) had accelerated due to the rapid development of computed tomography (CT) technology, reduced radiation levels and the introduction of a Medicare Benefits Schedule item number for it last year.

However, the update, which draws on the recommendations of the Cardiac Society of Australia and New Zealand 2010 guidelines on non-invasive coronary artery imaging, said current data did not support the use of CT coronary angiography (CTCA) to screen for CAD in asymptomatic individuals. (2)

The update authors said data did show CTCA was reliable for ruling out significant CAD and was most appropriate in symptomatic patients with low to immediate pretest probability of the disease.

“It should not be used in asymptomatic subjects, patients with known significant CAD or patients with a high pretest probability of CAD”, they wrote.

The article lists appropriate indications for performing CTCA, which include evaluation of chest pain with no previous known disease, evaluation of acute chest pain in the emergency department, evaluation of suspected coronary anomalies or complex congenital heart disease and exclusion of significant CAD before non-coronary cardiac surgery.

The authors described the sophistication of current CT scanners, saying manufacturers had adopted different evolutionary pathways to improve variables of coverage, speed and resolution, including one new scanner with 320 detectors capable of scanning the entire heart in one heartbeat.

Another new scanner enabled good quality images at higher heart rates and in half the time of other scanners.

There had also been a huge drop in the radiation dose due to a recent breakthrough in the prospective scanning technique.

“The radiation reduction is up to 80%, with doses of 2–5 mSv, which is lower than typical scanner invasive coronary angiograms and nuclear stress scans. However, patients must have stable, low heart rates (less than 60 beats per minute) without ectopy or heart rate variability, as there is little margin for error”, they wrote.

Diagnostic accuracy of the new technology had also improved to reliably exclude obstructive disease, but the ability of CTCA to quantify stenosis severity was not as robust. The use of CTCA to evaluate stent patency was also not recommended because various artefacts created by the stents may impede accurate assessment.

The authors listed questions clinicians should ask of diagnostic facilities performing CTCA, including the qualifications of the reporting doctor, reporting of radiation dose and scanning technique, and if prospective scanning was available.

They said further research would clarify and expand the role of cardiac CT in the future.

In the meantime, they said there was potential for misuse of the modality and “consideration should be given to other options in light of local resources and expertise”.

One thought on “Slow down on new CT use”