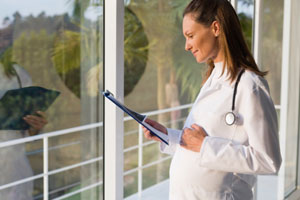 CHILDBEARING continues to have a significant impact on female doctors’ choice of speciality, but the situation is improving, according to female specialists.

Dr Kate Drummond, who chairs the women in surgery section of the Royal Australasian College of Surgeons (RACS), said the major difficulty still facing women who want to have children was how to undertake all the requirements to complete training while pregnant and raising young children.

Dr Kathryn Austin, a representative of the AMA Council of Doctors-in-Training, said although childbearing still had a significant impact on choosing a speciality, attitudes to pregnant trainees were changing and colleges were more flexible in training arrangements.

The doctors were commenting on a US study which showed there was still a “magnitude” of negative attitudes towards women surgical residents becoming pregnant compared with positive influences. (1)

The researchers also found that although negative attitudes were more prevalent among male surgeons compared with female peers, “even women residents hold negative views of pregnancy among their colleagues during training”.

“Surgical training takes place during a woman’s fertile years. Both the demands of training in surgical specialties and subspecialties and negative attitudes toward pregnancy may deter students from choosing surgery as a career”, the researchers wrote.

Dr Drummond said training in Australia was generally very different to that in the US, but the difficulties of childbearing during training were still an issue here.

She said more women were choosing surgery, with the percentage of female Fellows of the RACS increasing from around 4% in the mid 1990s to about 10% now, but the numbers were still small. The number of female surgical trainees has increased to 25%. These compare with Australian Institute of Health and Welfare figures, which show that 35.7% of employed medical practitioners in Australia in 2009 were women (up from 32.9% in 2005). (2)

The RACS had made training much more flexible, with trainees able to take a year off for approved purposes, which included childbearing and parenting, Dr Drummond said.

“But it is still difficult to provide opportunities for part-time training. How do we create part-time training jobs for surgical trainees that allow them to do enough hours to gain the appropriate level of experience, with the right mix of types of work in the job to complete their training and which are acceptable to the hospital that employs them?”

“Change is happening and I am cautiously optimistic, but it is difficult.”

Dr Austin, an obstetrics and gynaecology trainee in NSW, said more needed to be done to support both male and female trainees who wanted to have children.

“With generational change there will be increasing need to support professionals who are committed to their specialties who may need to have periods of time to balance work and life.

“Trainees — male and female — will always expect to work hard to obtain specialty qualifications but there must be flexibility to allow for maternity and paternity leave if we are to keep up with societal changes”, she said.