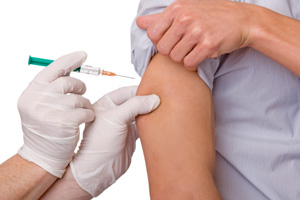 CONCERNS about a strong association between influenza vaccines containing H1N1 virus and Guillain-Barré syndrome, first detected in the US in the 1970s, have been largely put to rest in a Victorian study published in the latest MJA. (1)

It is the first published study reviewing Guillain-Barré syndrome (GBS) cases after the administration of monovalent and/or trivalent influenza vaccines containing the 2009 H1N1 strain.

The study, led by Dr Nigel Crawford of Victoria’s Surveillance of Adverse Events Following Vaccination in the Community, was conducted at 10 Victorian hospitals in 2009–2010 and identified a relative incidence of GBS of 3.4 after monovalent influenza vaccine and 0.69 after trivalent influenza vaccine, neither of which was significant.

The study was not powered to exclude smaller increases in the relative risk. However, when the Victorian data was linked to the WHO’s Global Vaccine Safety Initiative, a preliminary, unpublished analysis found a statistically significant relative incidence of GBS of 2.86. This was much lower than the 7.6 relative incidence found in the US in 1976–1977. (2)

“This small increase in GBS risk must be considered in the context of the benefits of influenza vaccinations, including potential protection against severe influenza and GBS due to seasonal influenza infection”, the MJA researchers wrote.

Professor Robert Booy, head of the clinical research team at the National Centre for Immunisation Research and Surveillance, said it was useful to have Australian-based data about the safety of influenza vaccines produced and used in Australia.

“The data helps us to confidently conclude that there was not a major increase in risk of Guillain-Barré after flu vaccination during 2009 and 2010 using both a monovalent and trivalent vaccine, both of which included a strain developed to protect against pandemic H1 flu”, he said.

However, Professor Booy said the study was not sufficiently powered to completely exclude risk.

“By reporting only from Victoria, the power is limited to perhaps a quarter of that which could be achieved by an Australia-wide study, and the power is such that we can only exclude a level of risk similar to 1976–1977 — a level which was completely unacceptable. However, we can’t exclude lower, but still increased, levels of risk that may be of concern.”

Professor Booy said a combined analysis of risk from the monovalent and trivalent vaccines could provide better evidence of safety.

He said the Victorian group were to be congratulated “not only for their own work, but their collaboration internationally”. “It would be great to see the report of consolidated data from several countries as soon as possible”, he said.

Professor Booy agreed, saying “Public confidence is really important for maintaining effective public health campaigns and so this information is vital to that end.”

An accompanying commentary in the MJA said the self-controlled case series method used by the Victorian researchers was an important method for studying adverse effects after vaccination. (3)

“It is well suited to use in linked health administrative data and is quick to implement, allowing safety surveillance studies to be undertaken in a short time frame”, the authors wrote.