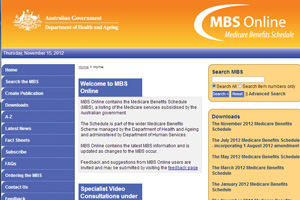 MANY of 150-plus potentially low-value health services on the Medicare Benefits Schedule identified in a systematic review could be delisted after appropriate consultation, says an expert in health care reform.

The research, published in the latest MJA, used a multiplatform approach to identify non-pharmaceutical health care services listed on the Medicare Benefits Schedule (MBS) which were potentially unsafe, ineffective or inappropriately applied. (1)

The researchers screened 5209 articles to identify 156 potentially ineffective or unsafe services that required further “expert clinical detailing”. About half of the services identified were operative procedures and the rest a mix of diagnostic, screening and monitoring investigations.

In an MJA editorial in the same issue, Professor Ian Scott, director of internal medicine and clinical epidemiology at Brisbane’s Princess Alexandra Hospital, said some of the services identified would be instantly recognised by seasoned clinicians as obsolete, such as adenoid removal in children with recurrent otitis media with effusion, and hysterectomy as first-line treatment for heavy menorrhagia. (2)

However, he wrote that opinions would be divided on the value of others services, such as exercise electrocardiography in patients with suspected angina, and endovascular repair of infrarenal abdominal aortic aneurysms in medically fit patients.

The research was conducted as part of the federal government-funded Comprehensive Management Framework for the MBS, which was established to improve management and governance of the MBS. The researchers used a three-pronged approach to identify low-value, non-pharmaceutical services — a PubMed search of peer-reviewed literature; analysis of databases such as the Cochrane Library and the UK’s National Institute for Health and Clinical Excellence “do-not-do” recommendations; and opportunistic sampling.

The researchers wrote that the review had confirmed that the use of ineffective and/or unsafe services across the entire patient population was probably quite rare.

“We have fairly good mechanisms for adding new interventions and new drugs, but we tend not to drop off the ones that are found to be ineffective”, said Professor Rubin, who is also director of clinical governance, South Eastern Sydney Local Health District.

Methods were needed to ensure the health system achieved the maximum health gains for each dollar, Professor Rubin said. “The methodology that’s advanced [in the research and editorial] is a great starting point.”

In his editorial, Professor Scott suggested a staged approach to removing items from the MBS, with the first step being to engage with professional colleges. Items associated with robust evidence of no benefit or of harm compared with “usual care” could be removed first (50% of items identified), followed by items associated with equivocal evidence of benefit that required further research (42% of items).

Professor Scott said MBS funding could be reinstated “if and when unequivocal evidence of benefit and no serious harm becomes available”.

The group of items associated with both benefits and potential harms could continue to be funded while risk–benefit trade-offs were investigated, he said.

Professor Rubin said a staggered approach to removing items was a “nice compromise”. He said such a system should not be punitive to particular interventions where it was not clear if there was a benefit to patients.

A Department of Health and Ageing spokeswoman told MJA InSight that as part of the Comprehensive Management Framework for the MBS, the department was undertaking 22 reviews of existing medical services, including knee arthroscopy, rhinoplasty surgery, botox injection items, and lipectomy items.

The spokeswoman said extensive consultation with clinical stakeholders and health care consumers was a critical part of any change to the MBS, including reviews of existing items.

“The approach to stakeholder engagement proposed in the MJA editorial is already being incorporated into refinement of the MBS reviews process, with the establishment of consultative review committees, comprised of clinical and consumer stakeholders, to advise on reviews”, the spokeswoman said.