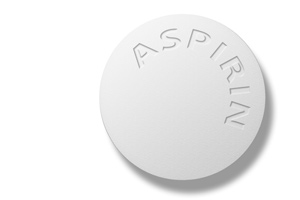 SWITCHING to aspirin after initial anticoagulation therapy for unprovoked venous thromboembolism can cut the risk of recurrent VTE by about a third, according to the lead researcher of an Australian study who says the finding is likely to be of great benefit in developing countries.

In the Aspirin to Prevent Recurrent Venous Thromboembolism (ASPIRE) study, 822 patients who had completed anticoagulant treatment after unprovoked VTE were randomised to take 100 mg aspirin, or placebo daily for up to 4 years.

When the results of the ASPIRE study, published in the New England Journal of Medicine, were considered alone, there was a non-significant reduction in recurrent VTEs with aspirin: (hazard ratio 0.74; 95% CI 0.52-1.05). (1)

However, the ASPIRE researchers combined their results with those of Italian researchers who had done a similar study to ensure the study was adequately powered. (2)

The combined results revealed a significant 32% reduction in the rate of recurrent VTEs and a 34% risk reduction in major vascular events — a composite of VTE, myocardial infarction, stroke or cardiovascular death — with no excess of bleeding compared to patients not taking aspirin.

Lead author of the ASPIRE study, Dr Timothy Brighton, senior staff haematologist at Sydney’s Prince of Wales Hospital, told MJA InSight the meta-analysis of the two studies, as presented in the NEJM, showed significant benefits of aspirin and was likely to change practice.

“Many patients are either unable to continue long-term anticoagulation or do not wish to do so, and now aspirin is an option for patients with unprovoked VTE”, Dr Brighton said.

He said the impact of the findings was likely to be greatest in developing countries. “Taking a bigger, global picture, I think it’s a really important result”, Dr Brighton said.

In India, where 124 patients were recruited for the ASPIRE study, long-term anticoagulation was often not an affordable or a practical option and aspirin could have a “huge impact” on recurrent thrombosis in India and other developing countries, he said.

In Australia, the introduction of newer anticoagulants such as rivaroxaban — which will be listed on the Pharmaceutical Benefits Scheme for the treatment of deep vein thrombosis from next month — would enable more patients with unprovoked VTE to stay on anticoagulation for long-term or indefinite periods.

However, the risk of bleeding associated with anticoagulants ruled out long-term anticoagulant therapy for many patients and aspirin was a reasonable alternative for this group, Dr Brighton said.

“We’ve had nothing else to offer these patients. Now we can offer them aspirin and say ‘look, this isn’t as effective as anticoagulation, but it’s very easy to take, simple and cheap, so it’s a good option’.”

The researchers noted that for patients who discontinued anticoagulation, the risk of a late recurrence of VTE was high — about 10% in the first year and 30% after 10 years. They said recurrent VTE was associated with a 5%‒10% fatality rate.

An editorial accompanying the ASPIRE study said aspirin was inexpensive, did not require monitoring and did not accumulate in patients with renal insufficiency. However, the editorial noted the importance of initial anticoagulation for patients who had an acute unprovoked VTE, saying they should receive an effective anticoagulation for at least 3 months to avoid the high risk of early recurrence. (3)

This latest research comes as another group of Australian researchers call on GPs and patients to sign up for a large clinical trial — the Aspirin in Reducing Events in the Elderly (ASPREE) study.

The study aims to recruit 19 000 healthy participants aged 70 years or older in Australia and the US, to evaluate the role of aspirin in extending healthy life — defined as life without dementia or disability. The Australian arm is charged with recruiting 15 000 participants in south-east Australia.

Professor Mark Nelson, head of general practice at the University of Tasmania, said the researchers had so far signed up 9028 subjects and 1857 GPs. “It indicates that general practitioners have a strong interest in participating in studies that are relevant to their patients”, he said.

“It’s answering a question that we’ve all wanted to know for about 40 years, since it was demonstrated that aspirin had cardioprotective effects”, he said. While aspirin had a “lay-down misere” in secondary prevention, reducing the morbidity–mortality risk by about 23%, it was a different story in primary prevention.

One thought on “Significant VTE benefits from aspirin”