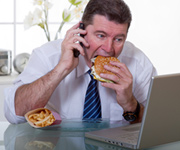 POPULAR vitamin supplements offer no cardiovascular benefit to well nourished patients and are not the “quick fix” many consumers believe them to be, says a leading Australian endocrinologist.

Professor Gary Wittert, head of the discipline of medicine at the University of Adelaide and with special interests in obesity and men’s health, said consumers could be seduced by unproven claims about multivitamins, which were no substitute for a healthy diet and resulted in “expensive urine”.

“This serves as a major distraction to the promotion of an appropriate, persistent and pervasive public health message about lifestyle and reinforces the ‘quick fix’ or ‘I can mitigate my bad lifestyle with the pill’ view of life”, he said.

He was commenting on the first long-term clinical trial of the effectiveness of multivitamin use in the prevention of major cardiovascular disease (CVD) events in men, published in JAMA last week. (1)

The study of 14 641 male US physicians concluded, after more than a decade of treatment and follow-up, that multivitamins did not help prevent CVD.

The Physicians Health Study II, a randomised, double-blind, placebo-controlled trial of a common daily multivitamin, followed the men — initially aged 50 years and over — for an average of 11.2 years. The intervention did not reduce major CV events, heart attacks, strokes, CV death or total mortality.

An accompanying editorial said the main hazard of taking vitamins was the fact people used them as “a simple and miraculous escape from the difficult and complex task of implementing effective prevention strategies”. (2)

It said many people with heart disease risk factors led sedentary lifestyles, ate processed or fast foods, continued to smoke and did not take life-saving prescribed medications, “but purchase and regularly use vitamins and other dietary supplements, in the hope that this approach will prevent a future myocardial infarction or stroke”.

“The message needs to remain simple and focused: CVD is largely preventable, and this can be achieved by eating healthy foods, exercising regularly, avoiding tobacco products, and, for those with high risk factor levels or previous CVD events, taking proven, safe and effective medications”, the editorial said.

One limitation of the study was that it involved only highly educated, well nourished male physicians, it said.

In the multinational study, 1516 patients scheduled for cardiac surgery were given placebo or a large dose of fish oil (preoperative loading of 10 g over 3–5 days or 8 g over 2 days, followed postoperatively by 2 g/day until discharge or postoperative day 10). None of the secondary postoperative AF end points or other arrhythmias were significantly different by treatment group.

Victorian GP Vicki Kotsirilos, founding president of the Australasian Integrative Medicine Association (AIMA), said it was important to ask patients why they were taking multivitamins and fish oils.

“I have not had a single patient who has said to me ‘I’m taking this multivitamin because I want to prevent CVD’ ”, Dr Kotsirilos said. Most of her patients took multivitamins for stress, poor diet or fatigue.

“A multivitamin may be useful in high-risk groups where diet is inadequate or with greater demands such as in teenagers who are dieting, the elderly with poor nutritional intake, those with chronic disease or malabsorption problems and in pregnancy and breastfeeding with increased needs”, she said.

Professor Wittert said vitamin supplements should be reserved for people with, or at risk of, deficiency, but he recommended vegetables over supplements. “Even if it is necessary to buy the seeds and grow them, it is a considerably better way to spend money”, he said.

Dr Kotsirilos said although it was important for doctors to adequately inform patients that there was no benefit in taking fish oils to prevent arrhythmias following cardiac surgery, taken with an adequate diet, fish oil supplements might still play an important role in reducing CVD risk.

“So there is a trend here about whole foods and good nutrition”, he said.