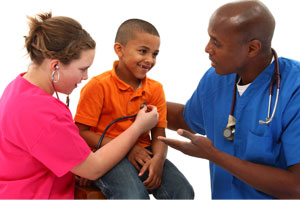 Give IMGs support to succeed

INTERNATIONAL medical graduates require far greater support in adjusting to the Australian health care system, say experts in response to research that found these doctors are at greater risk of attracting complaints and adverse disciplinary findings than their Australian-trained colleagues.

In a study in the latest MJA, University of Melbourne researchers analysed 5323 complaints against 3191 doctors in Victoria and WA and found that, overall, IMGs had 24% higher odds of attracting complaints to the medical boards than Australian-trained doctors, and 41% higher odds of adverse disciplinary findings. (1)

The researchers said this increased risk was largely driven by a higher incidence of complaints against doctors trained in seven countries — Nigeria, Egypt, Poland, Russia, Pakistan, the Philippines and India. IMGs trained in 13 other countries, including Hong Kong, Bangladesh, Germany, Malaysia and New Zealand, were no more likely to face complaints than Australian-trained doctors.

In an editorial, Dr Balakrishnan Nair and Dr Mulavana Parvathy, of John Hunter Hospital’s Centre for Continuing Medical Professional Development, wrote that the findings highlighted the need for a proactive and tailored approach in assessing and supporting IMGs. (2)

“Instead of setting IMGs up to fail, we should be doing everything to set them up to succeed”, wrote Drs Nair and Parvathy, who are both IMGs and Australian Medical Council examiners.

Professor Merrilyn Walton, professor of medical education (patient safety) at the University of Sydney, said it was important to acknowledge that IMGs deserved and warranted support.

She said many IMGs entering the health system were “tacked on” to an already stressed supervision system in which IMGs were supervised alongside Australian-trained interns. “These two groups have different training needs”, she said.

“We need an interim preparatory stage, where it’s not necessarily only about learning medicine, it’s about learning context — how our hospitals are organised, how health teams relate and work together, how to manage the hierarchies in health care, the relevance of guidelines and protocols, because many countries don’t have organised clinical systems designed to improve patient care”, Professor Walton told MJA InSight.

She said a possible confounder to the research could be that people who made complaints about this particular group were more likely to complain about a person from another culture in circumstances where they might not complain if the treating doctor was Australian born. However, the research had also identified doctors from non-English-speaking backgrounds who did not attract a higher number of complaints, which indicated that racism was not the only factor driving complaints.

Professor Walton said until it was recognised that IMGs required specific support, it was likely that the number of complaints would only increase and would feed into racism.

Dr Viney Joshi, president of the Australian Doctors Trained Overseas Association, said he was unimpressed with the study because it focused on only two states and contradicted research published last year in the MJA, which found that IMGs in private practice in Victoria were at lower risk than other doctors of experiencing a complaint. (3)

Dr Joshi said while IMGs required greater support and mentoring it was just as important to stamp out discrimination against IMGs in Australia. “There is still a lot of discrimination, harassment and bullying against the overseas-trained doctors. So that nonsense has to stop”, he said.

It was also crucial to stop changing the goal posts for IMGs, Dr Joshi said, citing changes in requirements for the English exam. Dr Joshi, who teaches medical students at the University of Queensland and James Cook University, said many of the locally trained students would be unable to pass the English exam.

“You don’t have to read Tess of the d’Urbervilles to your patients, you need to be able to communicate with them effectively”, he said.

“Doctors I have mentored have been brought in by one of the many recruitment agencies, had one week’s orientation and they’re out on their own — in a different country, different health care system, Medicare rules, PBS [Pharmaceutical Benefits Scheme] rules, different pathology”, Professor Jones told MJA InSight.

Professor Jones said there had been successful programs for IMGs to help to reduce complaints. State college faculties were also conducting information forums for IMGs, with WA’s inaugural forum to be held next month.

35 thoughts on “Give IMGs support to succeed”