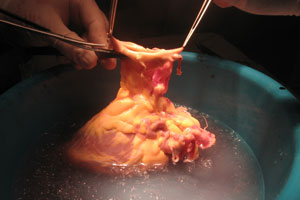 CULTURAL change in the hospital system is the key to lifting Australia’s sub-optimal organ donation rates and not implementing an “opt-out” consent regime, according to transplant experts.

They say improving the way doctors interact with families in tragic circumstances would be more beneficial than a consent model that would have required Australians to opt out of organ donation. Proposals for an opt-out model have now been abandoned.

“We must have an effective and sustained improvement in organ donation rates to bring Australia in line with countries in North America and Europe that are able to provide transplantation to two to three times as many patients as we do”, wrote Associate Professor Simone Strasser, a gastroenterologist and hepatologist at the AW Morrow Gastroenterology and Liver Centre at Royal Prince Alfred Hospital, Sydney.

However, he said overseas success stories such as in Spain and the US illustrated that an opt-out consent model was not a key factor.

“There is not much evidence that opt-out is a key differentiator between leading countries that have much higher organ donation rates. That’s why it’s dropped off the agenda”, he said.

More significant was the need to change medical practice and medical culture in hospitals with regard to organ donation, Professor McCaughan said. This included the need for better identification of organ donation candidates and efforts to gain family consent in a caring and compassionate way.

Although some structures attempting to do that had been put in place, more needed to be done. “We have to change the culture, not just improve the practice”, he said.

Moves along these lines were now afoot, according to the national medical director of the OTA, Dr Jonathan Gillis.

He confirmed the opt-out model was no longer under consideration. Instead, he said, the OTA had launched major initiatives to improve data collection, the identification of organ donor candidates and to introduce trained experts in organ donation into the hospital system.

Dr Gillis said the Gift of Life Institute, an internationally renowned donation training and education facility in the US, had been contracted by the OTA to train staff on how to sensitively communicate with families.

Trials of a collaborative system where an organ donation expert would be in the room with treating intensivists were also underway. Dr Gillis said the OTA’s goal was to lift the consent rate from the current 60% to 75%.

Professor Peter Macdonald, president of the Transplantation Society of Australia and New Zealand and a senior cardiologist in the heart and lung transplant program at St Vincent’s Hospital, Sydney, said Australia’s organ donation rate has increased from about 10 per million population to around 15 per million since 2008.

He said though it was a significant increase, it was still far short of world best practice. In Spain, for example, organ donation rates were 30 per million.

Professor Macdonald said another challenge for Australia was the low number of ICU beds per head of population. Because pressure on beds was so high, priority had to be given to critically ill living patients.

“These reforms do take time. From a transplant perspective we all want to maximise opportunities for transplantation but it took 10 years for Spain to achieve the levels they’ve reached”, he said.

Meanwhile, transplantation techniques continued to improve, Professor Macdonald said. “Our group and others are working experimentally on ways of recovering the heart from patients who became organ donors after circulatory death [rather than brain death] and reactivating it”, he said.

However, currently no heart transplant units were prepared to use hearts from donors after cardiac death, he said.

In Victoria, the Royal Children’s Hospital working in collaboration with the Austin Hospital recently became one of just 35 centres worldwide equipped to perform intestinal transplants for patients with irreversible intestinal failure.

Australia’s first intestinal transplant recipient remained well 2 years after his operation, according to doctors who conducted the procedures and who described the procedure in a Case Report in the same issue of the MJA. (2)

An article published in The Lancet last week provided details of a new portable device for the preservation, assessment and transport of donor lungs that was used successfully for 12 patients in Germany and Spain. (3)

One thought on “Culture the key to lift donor rates”