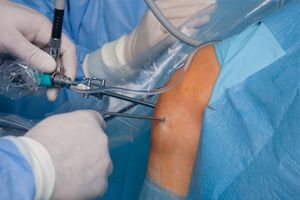 SOME surgeons have questioned suggestions that Australian knee osteoarthritis patients are still being offered arthroscopy despite a decade of evidence questioning its effectiveness.

Their response follows the release of a study in the latest MJA showing usage patterns in all public and private Victorian hospitals in the 9 years to 30 June 2009. (1)

The results indicate that although the number of knee arthroscopies had declined overall, rates had remained steady in those with osteoarthritis, especially in private hospitals.

The authors wrote that research published in 2002 and backed by subsequent studies questioned the benefit of knee arthroscopy in patients with osteoarthritis.

The research identified 159 528 patients having a knee arthroscopic procedure in 123 hospitals, with most admissions same-day patients.

“Our findings show that the largest increase in the IRR [incident rate ratio] of procedures is among same-day admissions within medium orthopaedic volume, private hospitals. These trends suggest a changing model of care for use of elective knee arthroscopy”, the study authors said.

An accompanying editorial said changing of clinician beliefs and behaviour, even in the face of credible evidence, “remains highly challenging”. This was exposing patients to an intervention that was “at best ineffective, and at worst, harmful”. (2)

However, Dr Greg Witherow, Australian Knee Society president, told MJA InSight he did not accept this.

“Our practices are full of patients who gain years of symptomatic relief from arthroscopy despite moderate articular cartilage damage and return requesting surgery for their other knee when they experience symptoms”, Dr Witherow said.

He also questioned the generic diagnosis of arthritis used in the study. “It means articular cartilage change, which to some degree is normal in this age group”, he said.

“However, in most circumstances there is a combination of chondral and meniscal pathology. It then is a matter for clinical judgement as to the role for arthroscopy or to proceed to a more major procedure”, he said.

Dr Andrew Shimmin, Arthroplasty Society of Australia president, said it was a matter of balance.

“Most now know that orthopaedic surgeons shouldn’t and don’t arthroscope the knee for a primary diagnosis of arthritis, but some patients have been putting up with mechanical knee problems for years on this premise.”

Dr Graham Mercer, president of the Australian Orthopaedic Association, said although there were some indications for doing arthroscopy for arthritis alone, most surgeons “would say it doesn’t do a great deal and there is a chance you can actually make patients worse”.

He said the literature supporting this was now well accepted in South Australia, and the rate of arthroscopy per head of population in SA had fallen accordingly in recent years.

Dr Mercer also noted the difficulties of doing a randomised study. “I look at trials that have compared conservative treatments to arthroscopy treatments, and it’s difficult to compare apples with apples because patients’ symptoms may vary depending on where the arthritis is located in the knee”, he said.

2 thoughts on “Knee arthroscopy use questioned”