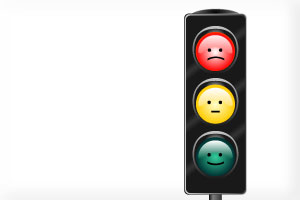 TRAFFIC light-style labels on food products have been branded a success in a US study, adding weight to mounting local evidence that a suite of interventions is needed help people make healthier choices.

The research, published in the American Journal of Preventive Medicine, found that colour-coded food labels improved food and beverage choices among hospital employees from all racial and socioeconomic backgrounds. (1)

The study follows the Australian Government’s decision last year to reject a recommendation for traffic light food labels that warn consumers about high levels of salt, sugar or fat in Australia. The Government is now consulting with industry to see if a mutually agreeable labelling system can be developed.

He helped to developed an iPhone application, called Foodswitch, which rates thousands of supermarket items with red, orange or green ratings for their fat, sugar and salt content.

Professor Neal said the large number of downloads was proof of the public’s demand for such information.

“We’ve had around 200 000 downloads, which is pretty decent hit rate and is another indication of community interest in these sorts of labelling initiatives”, he said.

Also, recent research published in the Health Promotion Journal of Australia, found that most Australians supported a traffic light system for food. (2)

The researchers polled a random sample of grocery-buying adults in Australia and found a clear majority (80% or more) were in favour of traffic light labelling.

“Overall, these findings indicate that there is strong public support for the introduction of policy initiatives aimed at creating a healthier food environment”, they concluded.

Nutritionist Rosemary Stanton said a traffic light labelling policy in Australian school canteens had been well received by children and had resulted in lots of food companies changing their formulations.

She said child obesity rates had also levelled off alongside its introduction, though she stressed that this observation was anecdotal as no studies had been done.

Meanwhile, an Australian study published recently in PLoS ONE has found that relying on lifestyle counselling programs for cardiovascular disease prevention was an inefficient use of health care resources. (3)

Counselling on diet and exercise could be effective, the study found, but it was expensive to provide, and people found it difficult to sustain the changes in behaviour.

According to the researchers, the best value for money was achieved through a different set of measures, including minor government regulation of the food industry.

“Mandating more moderate use of salt in breads, margarines and cereals is easily the most effective and cost-effective strategy for primary prevention of CVD; it produces the biggest improvements in population health, and can save money for the health sector”, the researchers wrote.

Dr Linda Cobiac, a research fellow with the University of Queensland’s school of public health who led the study, told MJA InSight that there was no single solution to tackle the problem of obesity.

“We need to address our environment, transport policies, and food manufacturing, prices and availability and provide support for people in improving their diet and physical activity levels”, she said. “There is growing evidence that influencing prices and labelling of foods to encourage healthier choices could be an important element of such a strategy.”

Dr Cobiac said traffic light labelling could change choices at the cash register, which might encourage retailers to stock more healthy options, and manufacturers to start making healthier products to get the green light sticker.

However, she said more regulation was needed.

“These types of incentives are good, but our research around salt reduction shows that the health benefits are relatively small at a population level, unless we back it up with regulation to get all food manufacturers on board with making changes”, Dr Cobiac said.