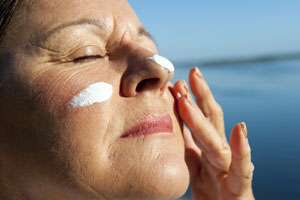 DOCTORS should ensure that patients taking photosensitising drugs, such as common antihypertensives, are aware of the extra need to protect their skin from the sun, leading dermatologists say.

Dr Phillip Artemi, honorary secretary of the Australasian College of Dermatologists, was commenting on a US study that found patients taking common antihypertensive drugs were at increased risk of lip cancer.

The research, published in the Archives of Internal Medicine, found that the antihypertensives increased the risk of lip cancer and the risk rose with duration of use of the drugs, although the authors stressed the benefits of taking such antihypertensives outweighed the risk. (1)

The researchers compared prescription data for 712 people who developed lip cancer with those of 22 904 controls.

Although this study focused on lip cancer, it was likely that patients taking photosensitising agents were also at increased risk of basal cell and squamous cell cancers of the skin, according to an accompanying editor’s note. (2)

“Hypertensive [sic] medications are commonly prescribed, yet physicians and patients may be unaware that many of these agents are photosensitizing”, the editorial said.

The study authors said the findings were important because simple measures ― such as lip protector, sunscreen, large-brim hats and avoiding times of the day when the sun was most intense, could decrease harmful effects of the sun.

“When initiating use of photosensitising agents for our patients, we need to remind them of these simple measures to avoid sun exposure”, they said.

Sydney dermatologist Dr Stephen Shumack said the study confirmed what had been suspected.

“So if you are on a photosensitive drug for some time — not just a few weeks or months ― you need to take special care as per the usual sun smart recommendations”, said Dr Schumack, who is medical director of the Skin and Cancer Foundation Australia.

Dr Artemi said other medications, including some of the other diuretics, antibiotics, retinoids, antidiabetic medications and anticonvulsants, may also be photosensitising, and patients should be made aware of this effect.

He added that there may also be a group of patients with a strong family history of skin cancer, with very fair skin, or those who work outdoors who perhaps should not be taking photosensitising drugs over the long term.

“It’s an interesting finding and is one that we need to keep in the back of our minds and perhaps on the back of this study, we need to look at this more closely”, he said.

Dr Shumack also agreed that doctors needed to warn patients of the increased risks of using photosensitive drugs, or even natural products.

He said the study indicated that people taking drugs that make their skin more sensitive to the sun may well be more prone to sun damage and skin cancer.

“I’d like to see a confirmatory study but this research makes a good case for looking into this”, he said.

“It’s worth noting that this doesn’t mean people should change their antihypertensive because there are some very simple sun protection measures that they should be using anyway, from Cancer Council’s point of view”, Professor Olver said.

One thought on “Skin cancer linked to common drugs”