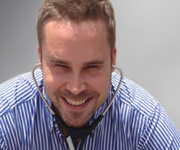 MAKING the decision to leave my comfortable city practice for Broken Hill was not easy.

I was working 4 days a week, enjoying the theatre, dining out and whatever else the city had to offer. My life was great, if not a little overindulgent.

However, as a kid from the country, the lure of a rural practice was somehow ingrained in me. I had always thought of myself as becoming a country GP as a child — TV shows such as A country practice romanticised the “true generalist” that a country GP can be.

Even Mikhail Bulgakov’s harrowing account of rural practice in A country doctor’s notebook did not faze me. Rather I found it alluring. The harsh realities of working in a resource-poor area seemed acceptable to me, perhaps due to my small town upbringing.

I did not immediately enter rural practice when I finished medicine in Newcastle in 2002. I was still young and wanted to travel and, more importantly, was still dating.

“Why restrict my social life by moving to a small town?” I thought. So I kept my options open and lived and worked in Sydney and London. It didn’t take long though before that small town boy (and his partner) decided to move to the outback.

My involvement with our university rural health club, medical school placements in country towns and hospitals, as well as 6 months of rural general practice training had helped me become familiar with rural medicine.

I had also developed a healthy relationship with a practice in Broken Hill through the John Flynn Placement Program. There is no doubt such programs work to help budding rural doctors dispel some myths about rural medicine. For me, a combination of these experiences and my own rurality cemented the move.

My move to Broken Hill, however, was more expensive than I had expected. Relocation grants aren’t paid until after 1 year of work — which I believe should change — and a considerable cost was incurred in having to move 1300 km, particularly in the time spent packing and in not working for 1‒2 weeks.

$20,000 poorer after all the moving expenses (I’m sure a disincentive for many, and one that will not be met by the grant in the first year), I was in Broken Hill. It is categorised an RA (remoteness area) 3 location — allegedly similar to Cairns and Port Macquarie but not Mt Isa, which is RA4  — but is still an expensive $550 minimum return flight to Sydney and quite far from any Thai restaurant (much to my dismay).

Just over a year on, these differences appear small. I have a great patient base and I see more medicine (my passion) in one day than I could imagine, with the added responsibility.

My partner has a job, our local gourmet club provides the occasional Thai night, and my earnings make the rare trip to Sydney or elsewhere easily affordable.

Housing is cheap and socially I am very busy. Still, I yearn for someone to walk in with a simple problem such as an upper respiratory tract infection.

I worry that a lack of adequate peer review will eventually warp my skill set in some way; I worry that sending a patient to a specialist can be a 1000 km return trip to Adelaide (should I be unable to get a patient in to see the overbooked fly-in specialists); and I worry that I will burn out.

However, unlike Bulgakov, who left medicine with a morphine addiction and typhus, I am enjoying life as a rural doctor.

If I were to write a book it would be a genuine positive reflection on a great experience. Like any big decision, the decision to move to rural practice should be a measured one. I’d like to think mine was thanks to some previous experience.

Dr Andrew Crossman is a GP in Broken Hill and a member of the Royal Australian College of General Practitioners National Rural Faculty.

The RACGP National Rural Faculty is celebrating its 20th year of operation in 2012. The faculty represents and advocates on behalf of more than 7000 members.