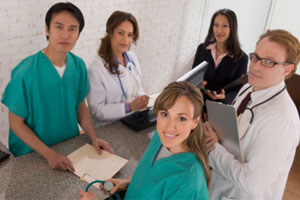 ASSESSMENT of international medical graduates can be done in the workplace rather than under exam conditions, if there are committed project teams and assessors, according to research in the latest MJA. (1)

The researchers reported on a 6-month trial of workplace-based assessments of international medical graduates (IMGs), which they admitted was intensive in its use of time and resources.

However, it had a 100% success rate compared to a 50% pass rate for the Australian Medical Council (AMC) clinical exam.

Most of the IMGs who took part in the trial reported that the workplace-based assessment (WBA) was more realistic than the current AMC format.

The researchers said that, like most developed countries, Australia relied on IMGs, with up to 30% of doctors in some locations being internationally trained doctors.

To gain general medical registration IMGs had to pass the AMC’s multiple-choice exam followed by a clinical skills exam. However, there was a long wait to undertake these exams, the researchers said.

All the IMGs invited to participate in the trial had passed the English language requirements and AMC multiple-choice exam and were on the waiting list for the AMC clinical exam. They were from India, Pakistan, Bangladesh and China, and had worked in Australia for between 1 and 10 years.

The researchers said the IMGs were employed as doctors with access to the health system to improve their knowledge, skills and performance. They conceded this advantage was not available to all AMC clinical exam candidates.

Assessors taking part in the trial reported that the most difficult part was the feedback process, with one saying that “we have to be prepared, in giving feedback, that it may be uncomfortable”. However, the assessors said they felt that the candidates improved during the assessment period.

Most of the IMGs reported that the trial was the first time they had received immediate constructive feedback on their performance.

Although the assessors initially reported concerns about “assessment fatigue” in a subsequent focus group they said they were prepared to do more assessments and appreciated the training they received.

“We believe our assessment tools and program meet the criteria of validity, educational impact and acceptability”, the researchers said.

They estimated the program cost $6000 per candidate over the 6-month trial.

“A key lesson to be learnt from this project is that assessor engagement is required for a successful WBA program”, the researchers said, admitting that ongoing assessment by a small cohort of willing assessors would be a challenge in the long term.

However, they said it had been a worthwhile program from both the assessment and educational point of view.

One thought on “Work-based assessment a winner”