Paul Nisselle: Expert witnesses have a duty of care too 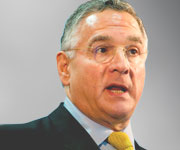 IN 1988, the High Court of Australia confirmed that barristers and solicitors are immune from liability for negligence in the conduct of court work.

One argument was that barristers should not be distracted by concerns about possible personal liabilities when having to make quick decisions in court. That really inflamed surgeons, who asked how that was different to their work in an operating theatre.

Indeed, the difference between a barrister and a surgeon is that when a surgeon is fighting to save a patient’s life there is not another surgeon on the other side of the operating table trying to kill the patient.

It’s the adversarial nature of the law that creates a clash of cultures — and responsibilities — with medicine.

Any doctor acting as an expert witness must know that their responsibility is to the court, not the person who has commissioned their report and testimony, but some doctors still slip into the role of medical advocate.

Whether it is a treating doctor asked to provide a report because the patient is making a compensation claim, or an independent expert commissioned by one of the parties to an action to provide a report, the doctor has a duty first to ensure they remain within their areas of demonstrable competence, and second, to write a completely dispassionate report, free of any bias.

The problem of medical expert bias was recently played out in the British courts when two pathologists were criticised for “scientific prejudice” by a judge. They had given opinions on the cause of death of a child, saying it was due to choking, contrary to the original postmortem report and the view of seven other expert witnesses who considered the cause of death to be a non-accidental head injury. The ramifications for the pathologists were reported in the journal Clinical Risk.

Bias is often unintentional, as treating doctors may think they have a duty to support a patient’s compensation claim. They do not.

In a NSW case in 1988, the trial judge referred to three medical experts called by an insurer in a compensation case as an “unholy trinity”. The judge described them as the “usual panel of doctors who think you can do a full week’s work without any arms or legs” and whose “views are almost inevitably slanted in favour of the [insurer] by whom they have been retained, consciously or unconsciously”.

Sadly, the High Court ultimately upheld an appeal against the judgment on the basis that those statements revealed bias on the part of the trial judge.

There was one doctor some time ago who saw the same compensation claimant twice but when he saw the claimant the second time he had forgotten he had seen that person before. One examination was commissioned by the defendant, the other by the claimant.

And (you guessed it) the opinions he expressed favoured the commissioning party on both occasions. Very embarrassing.

Unconscious bias still exists and is exploited. Most lawyers seek honest, straight–down-the-line opinions, not just for ethical reasons, but if a case is not a “goer” they want to know now, especially if they have taken the case on a contingency fee basis.

But some still think it’s clever to seek out doctors known to have very firm views on various issues.

One example that springs to mind is of a senior obstetrician who felt strongly that obstetric negligence was a much more common cause of cerebral palsy than the published studies said. His view was eventually discredited, but in the interim, it cost the medical defence organisations a lot of money, even when mounting ultimately successful defences.

Then there is the issue of incompetence. Claimants can be harmed, financially, because a doctor has given a poor opinion, based on an inadequate assessment, in an area of medicine that is outside their expertise.

How is that different from a patient clinically harmed as a result of medical negligence?

Is it too much of a stretch to say that a doctor’s duty of care extends beyond just those people seen as “patients” to include all people who could be affected by the exercise of their professional judgment, whether in clinical practice or giving evidence in court?

Dr Paul Nisselle, AM, is a senior consultant in educational services with The Medical Protection Society, UK. He worked with medical defence organisations in Australia for 20 years before moving to the UK in 2009.

One thought on “Paul Nisselle: Expert witnesses have a duty of care too”